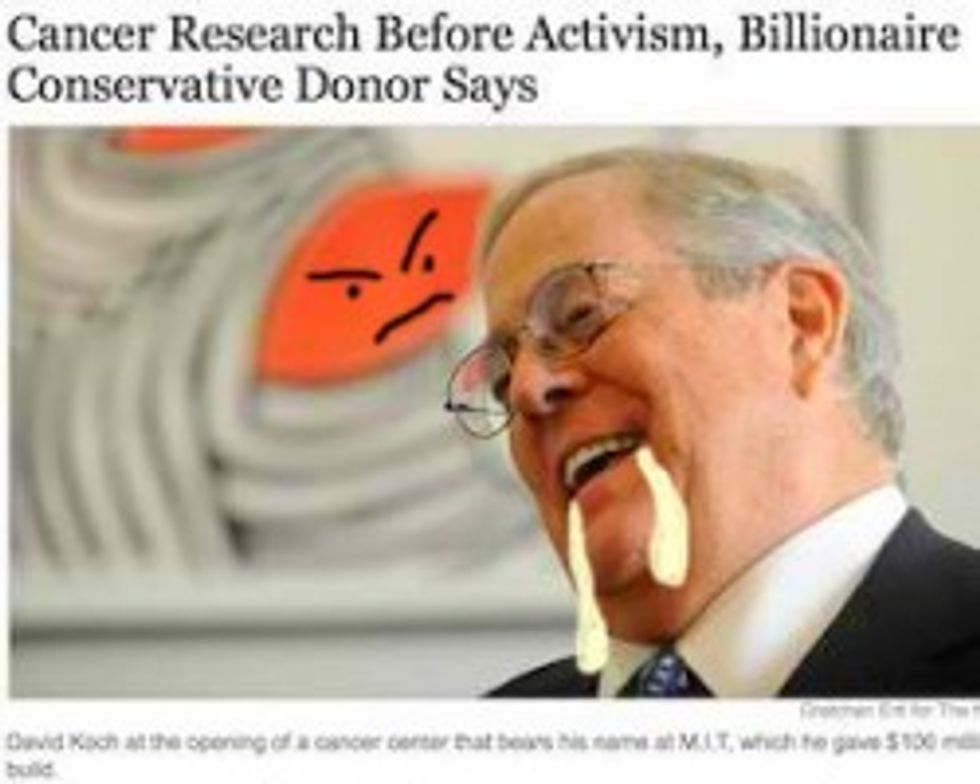 Hey, who's tired of reading actual "information" in the handful of remaining legitimate news outlets quietly dying out in America? Persecuted swamp monsters Charles and David Koch are growing tired of watching their feudalist political philosophies maligned in the media, so they have looked around and said to themselves, "oh shit, let's justbuy the media." Koch Industries is in talks to buy the Tribune Company's eight newspapers. We, for one, are excited to see Chuck Norris's work in the opinion pages of the Los Angeles Times. For information, however, we are pretty much going to rely on official press releases,  Reddit crowdsourcing, and blogs from here on out. USA! USA! USA!

From the NY Times:

Three years ago, Charles and David Koch, the billionaire industrialists and supporters of libertarian causes, held a seminar of like-minded, wealthy political donors at the St. Regis Resort in Aspen, Colo. They laid out a three-pronged, 10-year strategy to shift the country toward a smaller government with less regulation and taxes.

The first two pieces of the strategy — educating grass-roots activists and influencing politics — were not surprising, given the money they have given to policy institutes and political action groups. But the third one was: media.

That would be the LIBRUL media, duh, only don't worry! According to an attendee of the annual crotchety villain conclave in Aspen, the Koch brothers do not want to eradicate the competition; they just want to "make sure their voice is heard." Comforted? We are! Or then there is this blatant lie:

One person who has previously advised Koch Industries said the Tribune Company papers were considered an investment opportunity, and were viewed as entirely separate from Charles and David Kochs’ lifelong mission to shrink the size of government.

Ha ha, purchasing newspapers as an "investment opportunity." At least puke out a response that sounds believable, like you want to bring Cathy back to the comics section or something, jeez.