Kroger Execs Flee From Open Carry Nuts, Still Welcome Them In Their Stores 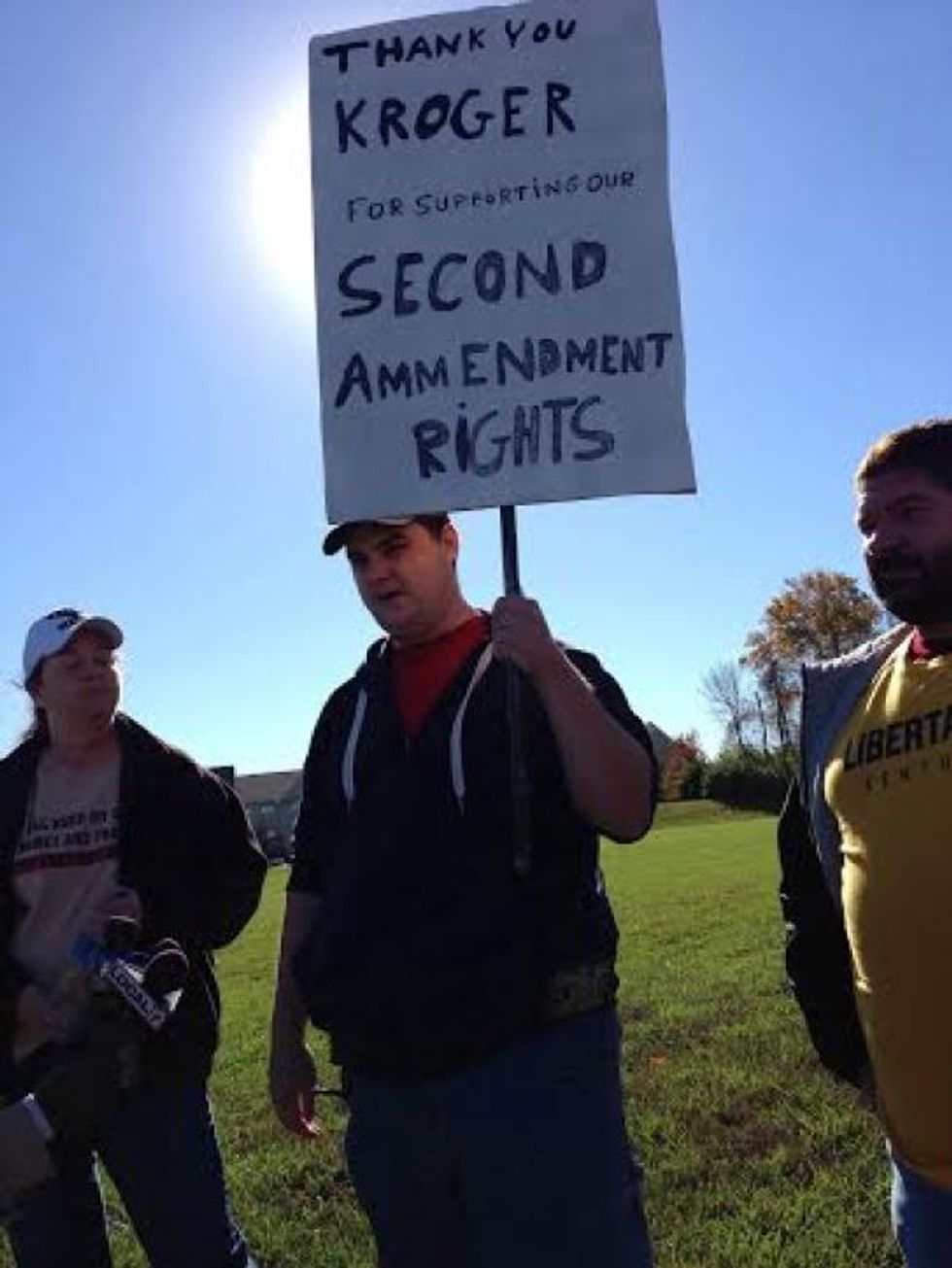 Now the confrontation is getting delightfully wacky: Counter-protesters are flashing misspelled signs along with their shooting irons, Clear Channel is allegedly pulling the Moms' hilarious radio ads, and executives are fleeing investor meetings in the dead of night for the safety of gun-free college campuses.

The lefty blog Liberaland has the dispatch from the front lines:

The [Kroger] Investor Relations Meeting was scheduled to take place at the Marriott in Cincinnati [...] The night before the meeting, while it was still dark out, all of the executives/investors appeared with their suitcases in the lobby and started loading onto buses.

With this move, the Kroger Executives [...] tried and failed to avoid the gun sense group but they did manage to escape to an area that doesn’t allow the open carry of guns.

My source made a quick call and found that the [Northern Kentucky University] campus forbids open or the concealed carry of firearms unless you’re a law enforcement official.

To be fair, maybe it's just dumb luck that the executives happened to flee to a place where open carry is prohibited, thereby forcing the counter-protesters to disarm if they wanted to continue their tantrum. While you mull that over, take a listen to some of these awesome ads that the Moms were running on Clear Channel radio stations before Kroger allegedly got them pulled. If you can't listen, here's the gist: The ads are simply recorded phone calls to Kroger asking questions like, "Can I bring my poodle who has separation anxiety to a Kroger store?" and being told "Not unless your dog is a loaded gun." (Paraphrased.)

Liberaland passes along a quote that seems to be from Clear Channel to the Moms explaining the decision to pull the ads:

The message received stated, “The only way we can run this in any market is if Kroger or any other business is not specifically mentioned. Can you do something more generic? We would still love to run something.”

This quote is unsourced and kind of awkwardly attributed on Liberaland's post, but it seems sufficiently spineless and unctuous to be authentic.

And of course it wouldn't be a pro-gun party without a misspelled scribblesign! Here's a heartwarming/rending/stopping photo of the Moms getting cozy with a bull-necked gunfellow:

This guy didn't see fit to take ten seconds to check the spelling on his very important protest sign, but he is pretty sure we should trust him to safely carry a loaded gun everywhere he goes.

“Millions of customers are present in our busy grocery stores every day, and we don’t want to put our associates in a position of having to confront a customer who is legally carrying a gun,” said Kroger spokesman Keith Dailey.

That's nice of them, to be so considerate of their associates! Random Kroger shoppers are probably better at confronting gun weirdos anyway, as this evergreen story demonstrates quite humorously. Money quote:

"What are you carrying?" asked Girard, a well-known local musician, who originally recounted the now widely reported incident in a Facebook post.

"An assault rifle," the guy said.

"Can I ask why you're carrying it around in Kroger?"

The guy told Girard it was his constitutional right to carry around a firearm.

Many pro-gun commenters on stories covering the Moms v. Kroger fight are defending Kroger's gun policy by pointing to a recent incident at a Memphis-area Kroger in which a group of youths attacked several people. 11 people -- "10 juveniles and one adult" -- were arrested within days, which would not have been necessary had there been an armed citizen there to shoot them all dead on the spot.