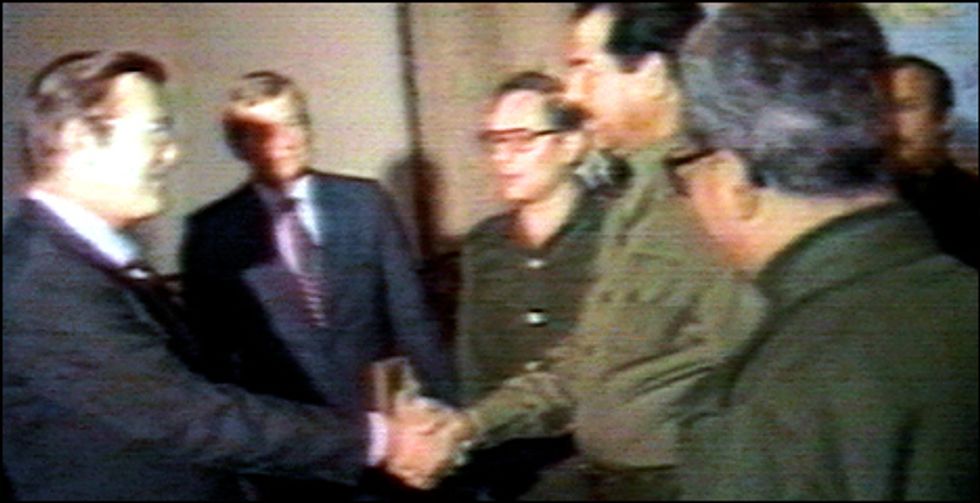 The "scandal" at the Los Angeles Times op-ed department about celebrity guest editors or whatever was only of interest to the 97,839 current and former reporters from the little-known California newspaper -- until shamed Pentagon criminal Donald Rumsfeld was brought into the mix this weekend.

Learn about the most boring whiny-assed people in the world (journalists) and their banal problems, after the jump.

The paper famously let the unindicted war criminal respond in print to an editorial calling for his resignation last year. It was already known that new LAT publisher David Hiller spent a lot of time "at the gym" with Rumsfeld. The paper's owner, Tribune Co., even shoveled piles of money at Rumsfeld for sitting on their board.

One of the last remaining LAT op-ed editors responded to the stunning new charges via "g-chat" this afternoon:

klayne: will you confirm that hiller offered saddam hussein a lucrative "guest editing" section despite the fact that saddam hussein spoke english poorly and, in fact, is dead?

Name Redacted: It is true.

There you have it. Also, outgoing ex-former LAT op-ed Al Qaeda No. 2 Michael Newman will be the new opinion editor at WashingtonPost.com.