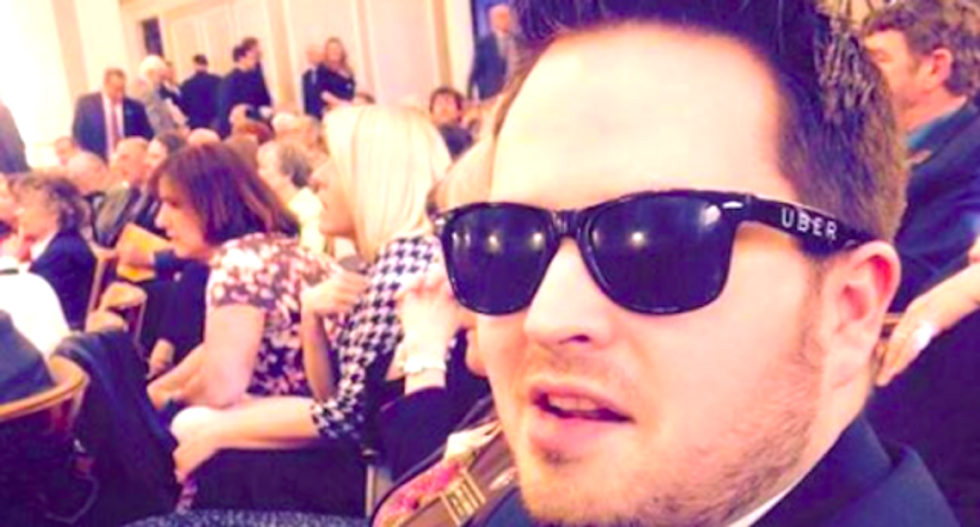 New Hampshire state Representative Robert Fisher has had a hell of a week! This past Tuesday, he was outed by The Daily Beast as very likely (totally definitely) having been the founder of The Red Pill forum on Reddit, under the screen name pk_atheist.

For the unhep, The Red Pill is a manosphere subreddit in which a bunch of dudes talk about the evils of feminism, how to manipulate women into having sex with them, and how women are all definitely lying about the existence of sexual assault and rape. The theme, basically is that "women are evil and THE WORST, but also we would like to have sex with them."

Under this alias, and others, Fisher opined that a 40-year old man asking to see the breasts of a 15-year-old girl was definitely not "creepy" but rather “evolutionarily advantageous and perfectly natural.” He argued against age of consent laws, insisted that women think that men they aren't attracted to are rapists, and pushed the idiotic concept of "regret-rape" -- the idea that women regularly later decide they regret sleeping with a man, and then decide to report him to the police for rape, because rape trials are such a fabulous time for victims.

Fisher initially denied that he was the founder of The Red Pill, despite the fact that the evidence proffered by the The Daily Beast shows that they are, indeed, one and the same.

A post by Pk_atheist in the early days of the forum advertises the author’s blog, Dating American, a blog that immediately precipitated the establishment of The Red Pill in 2012 and which was “dedicated to the woes of dating in the American culture.” On the “about the author” section of Dating American, the author, who calls himself “Desmond,” promotes two other blogs he’s “authored”: Existential Vortex and Explain God. Performing a search of the unique URL for Existential Vortex led to a comment on an ex-Christian message board again advertising the blog, existentialvortex.blogspot.com. This post, written under the alias “Interested,” provided the keystone that connected Pk_atheist and Robert Fisher. First, the post revealed the user was the author of Existential Vortex (and thus, Dating American). Second, in the user’s bio, he stated his band—The Five Nines—had a new album out. Robert Fisher is the sole member of his band, The Five Nines.

However, a statement given to New Hampshire reporters seems to indicate that he is perhaps no longer trying to cover that up. He took responsibility for at least one posting on another forum under a different handle -- which he claims was interpreted unfairly, and then affirmed his dedication to men's rights.

"I'm disappointed that this sort of attack has replaced real news, but it strengthens my position and resolve that fighting for equal rights is more important today than ever," Fisher said in a statement released Tuesday night. "Here's my message to the public: I am not disappearing. I will continue to stand strong for men's rights and the rights of all."

Fisher, in his statement, goes on to say that he faced "false rape accusations" in his early 20s that brought him to "a very low place."

Fisher admitted that he had said “some injudicious things about the opposite sex following a bad breakup.” So basically, a woman broke Robert Fisher's little heart, therefore he was forced to start an online He Man Woman Hater's club. And he's totally over that now, except that he is still totally all about men's rights. Other people's too, he guesses.

Shockingly enough, this did not go over too well with any of his colleagues! Even the Republican ones! They all kinda think he should step down and go away now, including Republican Gov. Chris Sununu and House Speaker Shawn Jasper (R-Hudson). Sununu stated on Wednesday that "Representative Fisher's comments are horrendous and repulsive and his resignation is certainly in order." Republican Party Chairwoman Jeanie Forrester agreed that he should resign, stating, "his comments are offensive, and the fact that he made them under the shadow of Internet anonymity tells you he knows they are offensive.”

I mean, really -- when you're saying things about women that even Republicans find offensive, you have certainly gone too far.

Given Fisher's history of lashing out upon being broken up with, one has to wonder whether he is going to start a subreddit in which he discusses his fears that his fellow Republicans will falsely accuse him of rape? Or will he create a whole new form of "game" that makes humans in real life find him less repulsive? Anything is possible.