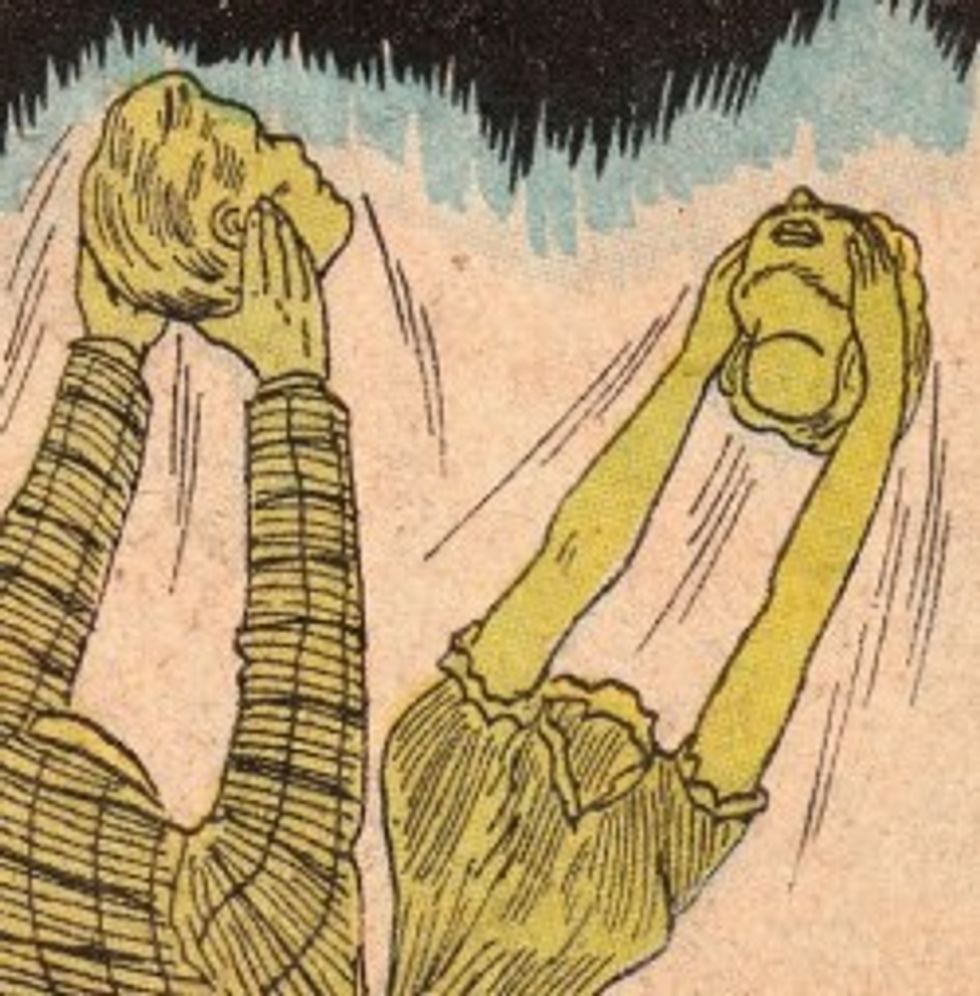 So there's this website, see, calledThought Catalog. It is a lovely place popular with the kiddos that promises to "probably make you more interesting," a promise that has been pointed out many times by many people, right before they insult the website, on account of its awfulness. This is one of those times.

You see, though their About page says they are "nobrow and nonpartisan... Culture is our politics," one of the Cataloggers of Thought, Karie Kardasheman, decided to take on feminism, which, she says, is "going out of style." Since we Wonket folk are so, so concerned with what is Stylish, we thought it best to pay attention.

We first learn, disturbingly, that "there is a very basic rhetorical problem with feminism — and it stems from terminology and semantics." Then, onto the first brilliant semantic argument:

...while it is unfair for misogynists to stereotype feminists as perpetually angry man-haters, there have certainly been some rather extreme ideas associated with popular strands of feminist thought.

Ok, so, first point: It's not cool that misogynists call feminists man-haters, but some feminists... hate men. So, you know, like, feminism is bad. That's really the whole first point. There is also something about vagina muscles. Gross.

Ohhh. Gooot it. One of the main reasons that "feminism is a lousy term that disservices its own foundational principles of gender equity" is that sometimes people are not so nice to men. Hear that, feminists? You've been standing up for the wrong gender this whole time.

Men can, for instance, be subject to false accusations of child molestation and rape.

Wait... THEY CAN?! This is a DISASTER. Well, we might as well stop accusing people of things. Also, feminists: You should probably stop fighting for sexual assault education and prevention; some people are sometimes wrongly accused of rape, and that is definitely a bigger problem that PEOPLE BEING RAPED.

Feminism does not really capture any of that side of the reality. In fact, it obscures this fact and diminishes the visibility of those out there who face real and serious consequences of gender discrimination but who don’t identify as women.

Never you mind the positive effects for everybody in the challenging of traditional gender roles and systemic inequalities -- feminism, obviously, only helps women. It's obvious, so long as you don't ask a dad who wants custody of his children because dudes can be caretakers just like dudettes, or a little boy who doesn't really like G.I. Joes and Tonka trucks, or the transgender man who's tired of people asking him what he is. Those people and their conflicts with an unfair gender binary don't count. Feminism has "fem" in the name. (Also, don't forget: It's out of style.)

Transgender individuals have faced a litany of harassment, discrimination and violence, from refusal of healthcare services, to denial of housing, to higher rates of violence...

Individuals who are transgender or non-gender conformist face some of the greatest obstacles to obtaining civil rights, social equity, and basic levels of respect.

Women are not the only group being discriminated against, sure. But nobody gives Habitat For Humanity any guff for not helping to cure prostate cancer -- and until women stop getting blamed for their own abuse, and until employers seeking to dictate female employees' health decisions are met with anything other than derision, and until congressmen like Rep. Todd Akin can demonstrate at least a basic understanding of the biology they are so wrathfully trying to legislate, there will always be a place for feminism.

Otherwise, who will oppress the men?