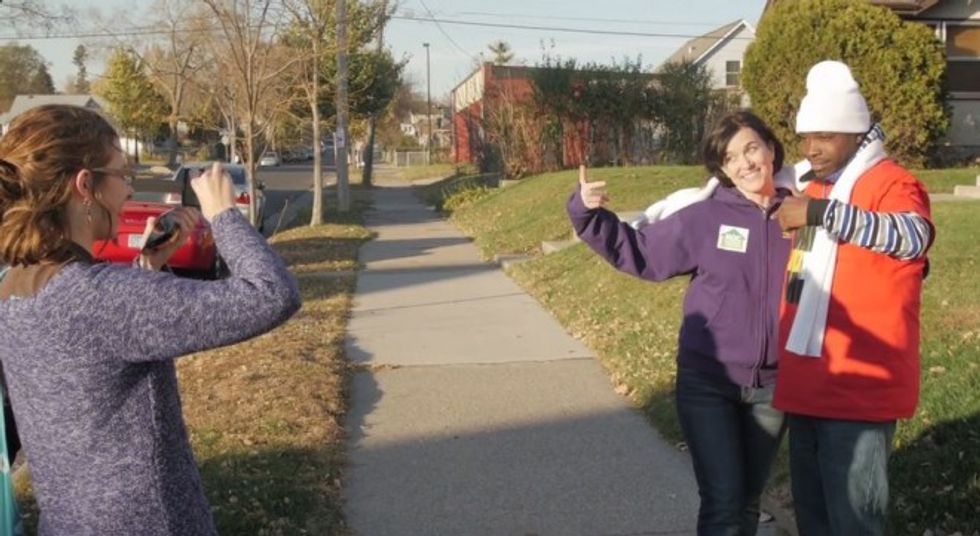 KSTP-TV, an ABC affiliate in Minneapolis, dropped a nuclear newsbomb on its Thursday EYEWITNESS NEWS broadcast: the city's Democratic mayor, Betsy Hodges, was consorting with gang members and had perhaps even been recruited herself.

Intrepid reporter Jay Kolls, sensing he'd found The Big One, took to Twitter in advance to pimp his report about a photo in which the mayor was "flash(ing) gang signs" with a "2x convicted felon."

5 EYEWITNESS NEWS has obtained a photo of Minneapolis Mayor Betsy Hodges posing with a convicted felon while flashing a known gang sign. The man in the photo is a twice-convicted felon for drug selling and possession and illegal possession of a firearm. He is currently sentenced to five years at the St. Cloud Correctional Facility, with the prison term stayed for three years while he is under supervised probation until 2016. If he violates terms of his probation during that time, he will serve the five years behind bars.

The mayor's press flak has a likely story to explain it all away.

The photo was taken a week before the November election while the mayor canvassed neighborhoods with a nonprofit group... (The mayor's spokesperson) told us the mayor enjoys meeting with many people who are organizing on the North side.

The spokesperson also says the man in the photo is well-regarded by the nonprofit that employs him and the mayor is simply "pointing at him" in the photo.

Oh, right! We're supposed to believe that? Reporter Jay Kolls knows his gang signs, and he says there is a gang with members that point like that. It's clear that Mayor Hodges is just as well versed in gang trivia as this reporter who is unquestionably A Expert, and she took this photographic opportunity to come out as proudly pro-gang!

The mayor's secret life as a bloodthirsty criminal is putting police officers in danger, according to one retired cop, because who will take them seriously when the lady in charge of their city is making nice with violent, thuggy thugs?

Retired Minneapolis police officer Michael Quinn, who also managed the department's Internal Affairs Unit, says the photo is "disappointing because it puts police officers at risk." When asked to respond to the mayor's statement that she is just "pointing at him," he said, "She can't be that naive. I cannot imagine. She is legitimizing these people. She is legitimizing gangs who are killing our children in Minneapolis and I just can't believe it. It hurts."

Quinn says law enforcement agencies are "going to be pissed about this. They're going to be angry, and they should be."

We're sure that any current cops who want to go on the record will be basing their criticism of Mayor Hodges purely on this damning photographic evidence and not on any animosity they might have over the mayor's recent willingness to believe that not all police officers are blameless in all situations. Her support for body cameras on police uniforms and actually firing officers who misbehave are certain to be unrelated!

After KSTP's megascoop, #pointergate swept across Twitter, revealing countless other public figures to be closet gang members. We would never have dreamed that we were surrounded by so many brazen criminals, but the evidence was undeniable.

This dangerous trend has already reached into a neighboring city's government.

The mayor's camp is sticking with their story that Betsy Hodges was just taking a picture with a young constituent while helping a local nonprofit organize in one of the city's most disadvantaged areas, rather than revealing her membership in a criminal enterprise, but we ask you: what kind of nonprofit would allow the mayor to mix with someone who once committed a crime and is trying to re-integrate into society?

The kind of sinister nonprofit that actually encourages people to vote.

Watch out, Minneapolis: Major Hodges has been initiated into a finger-pointing voter-recruitment gang. Their menacing thug of a leader could be coming for you next.

You can follow Beth on Twitter if you don't mind being led into a life of crime.