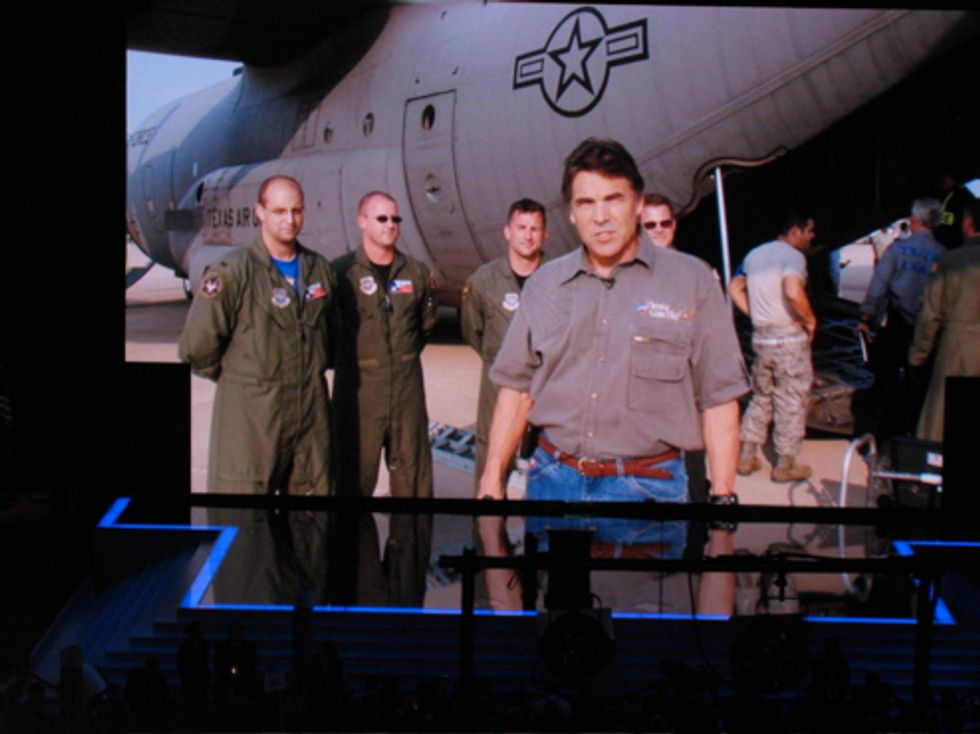 Live from the Xcel Energy Center! Uh, Laura Bush! She spoke, softly, and a giant video Rick Perry appeared, telling the very sparse crowd that he was going to save the poor people who maybe got flooded. He was standing by an airplane!

And that was it. A guy did a little prayer. And the North Dakota delegate, from the floor, JUST ADJOURNED THE CONVENTION.

This is outrageous. The sparse crowd is already headed down the escalators. Everybody looks ... sleepy. No music, no nothing. If you didn't know you were at a major national political convention, you'd just figure this was a silent auction for the animal shelter or whatever.

But ... despite the workaday old sports arena feel of this place, and the glum faces, and the crushing disappointment and boredom, this is already a much better convention in terms of your editors getting around, with ease. We left our hotel about an hour ago, and easily drove to St. Paul, found close-by parking, went through security (no lines anywhere), found the media hall where my buddies at AOL News are based, saw Laura Bush on one of the few-and-far-between video monitors within the convention center, and took a leisurely walk to our press section. Laura was still speaking -- and she only spoke for a few minutes.

Is this convention so easy because nobody's even here and nothing's going on? Perhaps! But everybody agrees that "the help" is just so much better here in St. Paul. They know things! Ask where, say, a section or row might be located, and they will not only tell you (accurately) where it is, but they'll helpfully point to the elevator or escalator you need to reach it. This may sound like the normal way things should work, WHICH IS WHY DENVER WAS SUCH HELL.

Oh, New Orleans ... jesus. Okay, let's write about that, in another post.