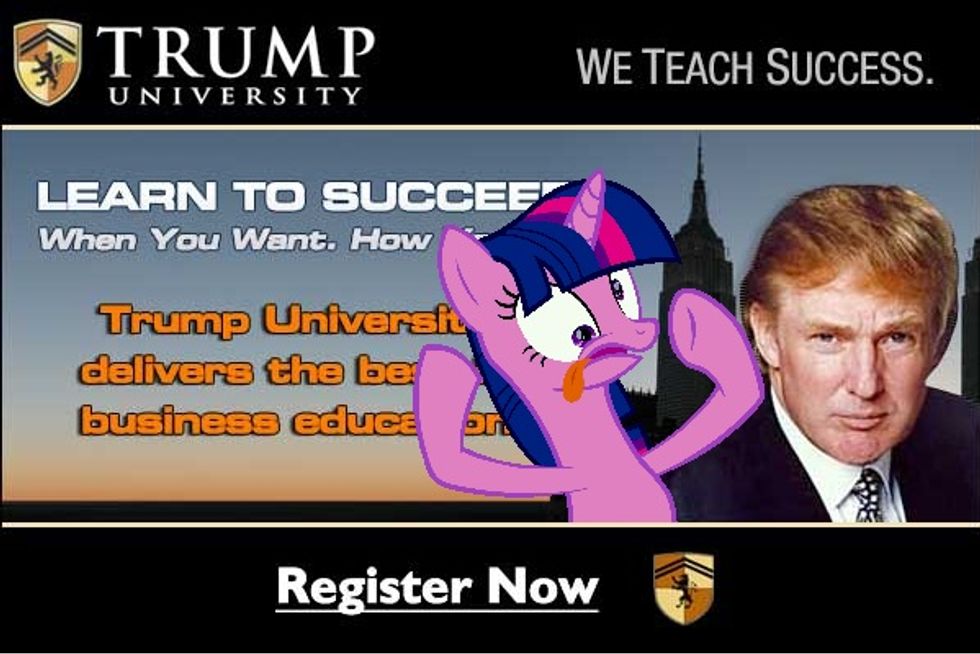 Here's a little bit of trivia that you might want to stash away in the same corner of your brain that remembers how Al Capone was finally busted not for being a mobster, but for tax evasion: It's starting to look like the best glimpse America may really get of Donald Trump's actual net worth will probably come from a discovery filing in a class-action lawsuit against his dumb fake "University," rather than from his federal election financial disclosure forms. We can't wait for Trump to condemn the people suing him as idiots and lightweights for falling for his distance-learning scam, just as he screamed at the New York AG who sued Trump "University" for fraud.

That fraud case is still pending, but as part of the lawsuit, New York Attorney General Eric Schneiderman won a court ruling that Trump was "personally liable for running Trump University without a license."

In this latest, separate case, U.S. District Judge Gonzalo Curiel ruled that Trump has to reveal his net worth and his contributions to Trump University; the "school" was sued in 2013 by Art Cohen, who "says he paid more than $36,000 for the program before realizing that Trump does not teach students his real estate investing secrets, contribute in any meaningful way to the curriculum, or handpick the instructors." Cohen's case against Trump was later expanded to a class action, including multiple students ripped off by Trump's real-estate "seminars."

The judge ruled that since Trump's finances are so opaque -- despite the pretty 1-page MS Word document he handed out at his announcement speech -- the plaintiffs are entitled to an accounting of the details of how he actually did his business to his "university":

Trump's payments to, and receipt of funds from, Trump University would be relevant to supporting plaintiffs' claims," Curiel ruled. He added that such information is not readily available to Cohen outside of discovery.

Vice notes that though federal campaign reporting rules require Trump to disclose his financial information as well, "those forms are difficult-as-fuck to read, and also fairly vague. With this suit, we'll at least be able to get a glimpse into how one specific arm of his empire was run (into the ground.)"

Not that it matters, of course, because Donald Trump is a classy, yoooge billionaire, and the people attempting to sully his good name are just jealous, a bunch of losers who were gullible enough to fall for a fancy sales pitch with Donald Trump's name on it, and he can't understand why they're so whiny. You never see Donald Trump whining, after all, just because a lot of very low-class people insist on being dumb and suing him.

[Vice and Courthouse News via Newswire]