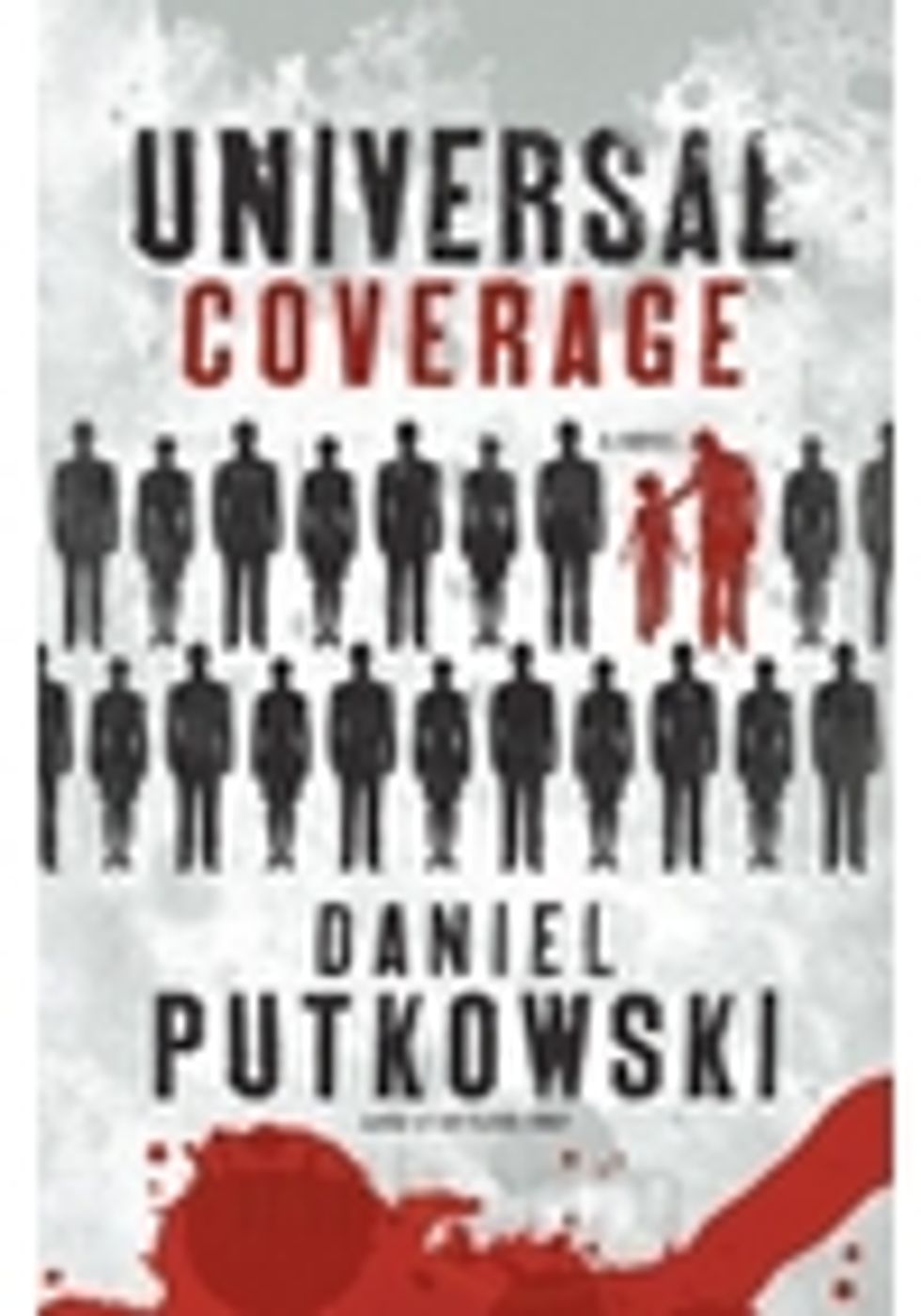 Looking for visions of a hellish future where every American has health insurance, gasoline costs ten dollars a gallon, and nature has largely reclaimed the exurbs from the strip malls and McMansions? If so, Universal Coverage by Daniel Putkowski is calling to you! A dystopian novel “in the tradition of 1984 and Animal Farm” (says elitist literary critic Newt Gingrich), Universal Coverage reveals the horrors of socialized medicine through the tale of one man’s quest to find a Boat-Hospital of Freedom to treat his unwell son. Fawning blurbs from Newt, Steve Forbes, and the president of NYU’s College Republicans are plastered on this book like gaudy lipstick on a common street pig, so it has to be good.

Our protagonist is named Bob Smith. Got that? BOB SMITH. Possibly a tribute to Winston Smith from 1984. We repeat, his name is actually Bob Smith.

Bob Smith and his wife Hannah (more on her later) have a son named Timmy (a tribute to Lassie? Or maybe A Christmas Carol?). They live in Media, Pennsylvania, and young Timmy is the best batter on his Little League team, the Moguls (get it?). Early in the novel, Timmy collapses on the school playground. It turns out he has some sort of heart-valve problem.

Timmy is rushed to the hospital, but the Universal Coverage system of the book’s title isn’t going to help him. The emergency room is crowded and dirty, the wait time is long, and the nurses are all Valley Girls from the 1980s and '90s, somehow transported into the future:

[H]e met an unofficial-looking woman wearing sweatpants and a t-shirt, as if she’d just come from an aerobics class.

“Universal Coverage Card?” she asked, holding out one hand without looking up from the frozen drink she stirred with the other.

Reaching for his wallet, Smith said, “My son was brought here. This is an emergency.”

“Like, duh, that’s why it’s called the emergency room,” came the reply.

Totalitarian ditziness isn’t the only problem with this future USA. In addition to the dismal health care, gas costs far too much:

Several houses on his street remained empty. His former neighbors moved out more than two years ago. Living in the suburbs wasn’t what it used to be. Expensive transportation was the problem. Gasoline cost more than ten dollars a gallon, if you had an approved voucher to buy it. Everyone carpooled or used mass transit to get to work. Leisure trips to the mall or the movies or a restaurant required serious planning.

Because everyone knows that in areas where people rely on public transportation more than cars, shopping and movie-going and eating out are virtually impossible ....

Another disturbing facet of this dying suburb: No one bothers to cut the grass around Media’s empty office parks, or in front of the abandoned strip malls, and tall weeds obscure the local Applebee’s.

Anyway, Timmy needs a pacemaker, but the bureaucratic government doctors won’t give him one. This makes them a death panel, more out of laziness than malice. Bob Smith sees a samizdat teevee advertisement for an offshore private medical clinic that can help Timmy. By “offshore” your reviewer means “it’s an actual boat in international waters doctoring people, for a fee.” Bob Smith busts his son out of the grubby Universal Coverage hospital and escapes to the medical freedom boat, which is called Salvare (the fancy Italian word for “to save”). Apparently, the Salvare boat inspired one reader enough to film an actual YouTube version of the book’s fictional advertisement.

But the real villain of this novel isn’t universal health care. Nor is it the unnamed President who instituted it (and who makes a few pointless appearances in the book). The true terror in Universal Coverage is supplied by Bob Smith’s ball-busting liberal nag of a wife, Hannah.

Her crimes include getting pissy when Bob buys Timmy a bike, going out and drinking with her girlfriends while Bob tends to their son by himself, and generally neglecting her marriage. As Potkowski writes, “Smith felt Hannah should have spent a little more time with him, but she was less a sports nut than a member of the more cultured class ....” Consequently, they sometimes argue “about whether the family budget should be spent on a trip to the Baseball Hall of Fame or a weekend of Broadway shows.”

Hannah is mean and unpleasant throughout the novel, and even worse, she actually BELIEVES in the Universal Coverage system that’s killing her son. But don’t worry. By the end, it seems Bob is planning on ditching her for a Polish babe who works on the Salvare private-care yacht.

IN CONCLUSION: This might be the least chilling dystopian novel ever written. But any book that advances your favorite political opinions has to be good, right? Not for Wonkette, of course, but for Newt Gingrich and Steve Forbes and other people who think Ayn Rand is the ultimate novelist.

What exactly is the political message here? Something like “Men of America! If universal health care doesn't get you, your shrewish wife will. THIS IS YOUR FUTURE. WEEP. WEEP."

Send a list of your favorite floating hospitals to greer.mansfield@gmail.com.