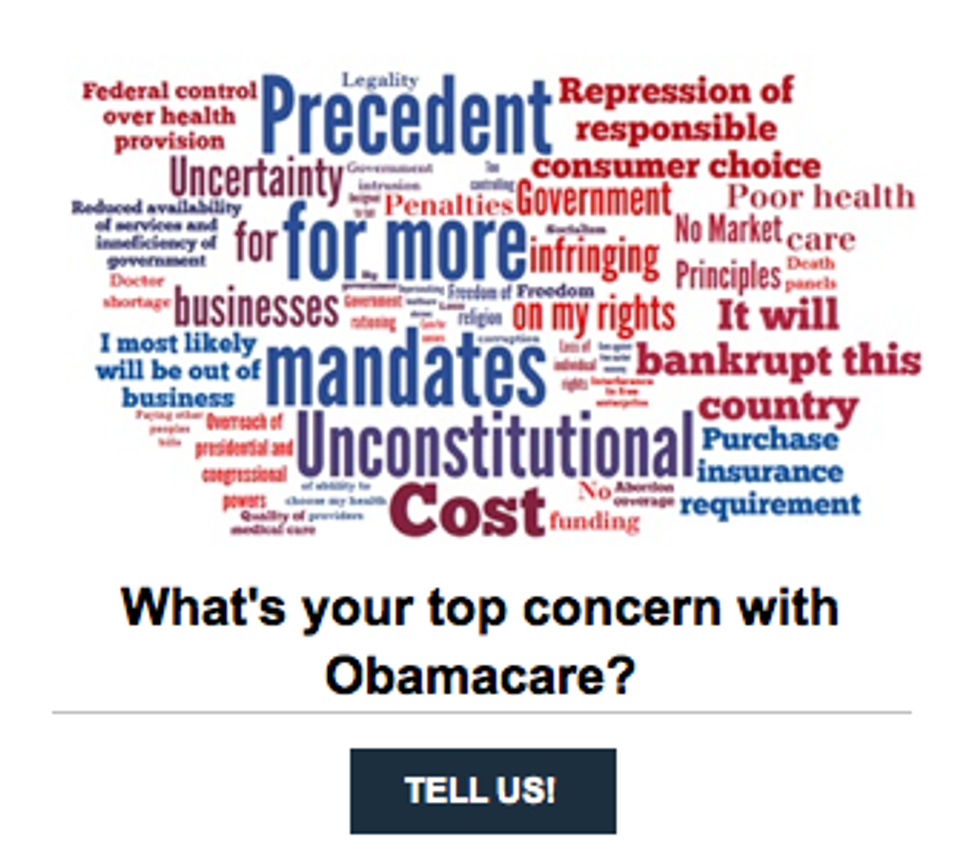 Meet Mary Brown, 56, of (where else?) Florida. She is the lead plaintiff in the National Federation of Independent Business's lawsuit to overturn Obamakkkare, which is expected to be heard later this month by the Nine Hepcats and Kittens of the Supreme Court, because she ain'twant insurance, Ain't NOoBama1 tellin' her what to do, Hitler, socialisms, and etc. But has Miz Brown perhaps brought complete and utter humiliation to the hacks of the NFIB, by having accidentally neglected to inform them she'd had a bankruptcy that was in part brought on by unpaid medical bills? And has she responded to the LA Times' inquiry into same with an elegant and spittle-flecked rage-on? Well duh.

Said a lawyer for the NFIB to the Los Angeles Times, Brown "doesn't have insurance. She doesn't want to pay for it. And she doesn't want the government to tell her she has to have it." Darned tootin'.

But court records reveal that Brown and her husband filed for bankruptcy last fall with $4,500 in unpaid medical bills. Those bills could change Brown from a symbol of proud independence into an example of exactly the problem the healthcare law was intended to address.

[...] Obama administration lawyers argue that the requirement is justified because everyone, sooner or later, needs healthcare. Those who fail to have insurance are at high risk of running up bills they cannot pay, sticking the rest of society with the cost, they argue. Brown's situation, they say, is a perfect example of exactly that kind of "uncompensated care that will ultimately be paid by others."

Brown, reached by telephone Thursday, said the medical bills were her husband's. "I always paid my bills, as well as my medical bills," she said angrily. [...] "Who says I don't have insurance right now?"

Brown intends to continue as plaintiff before the Supreme Court. Lawyers at the NFIB smiled tight corpsey smiles and agreed. Said one, doubtless before swallowing a fistful of Ludes, "[A]s long as she doesn't want healthcare, she qualifies as a plaintiff in our mind." [LA Times]