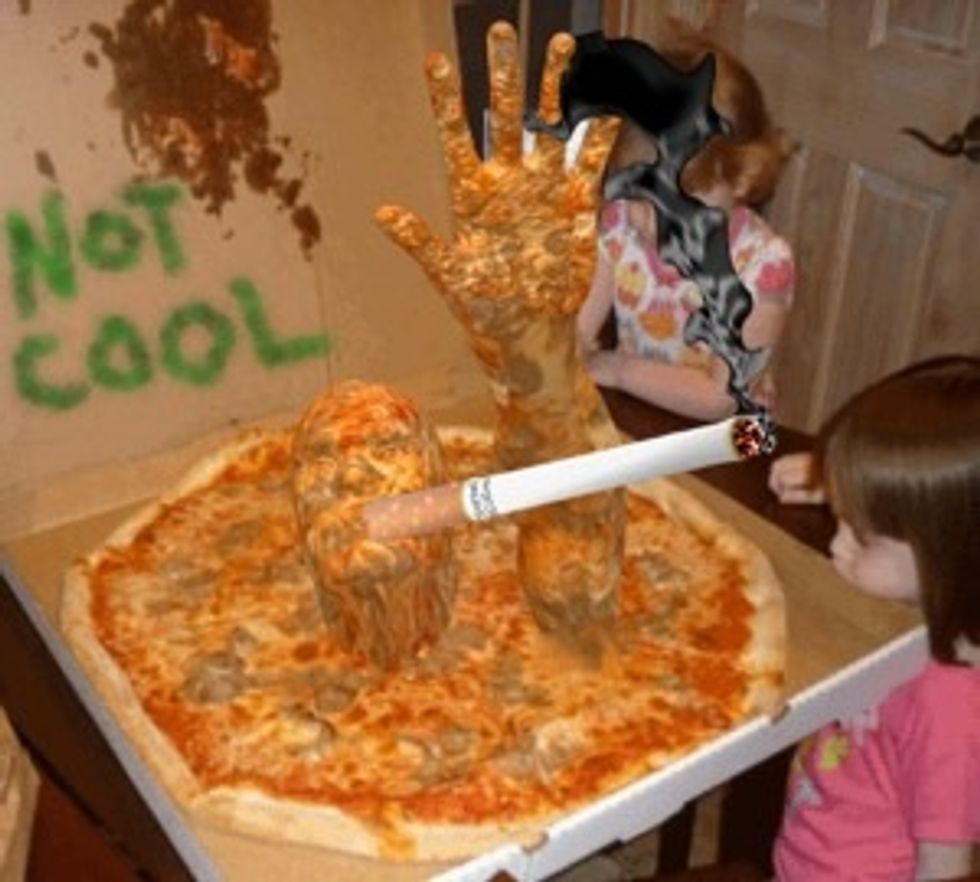 Herman Cain is a pumpkin-headed creepy narcissist businessman who likes to repeat single-digit numbers and say stupid things. For reasons he cannot begin to explain, this Washington lobbyist and shit-food merchant allowed the release of a "web commercial" that shows a dirty old man saying weird things about Herman Cain and then melodramatically smoking a cigarette while making masturbation faces. Is the whole thing a stunt meant to sow confusion and insanity because modern life is a meaningless series of spectacles meant to jarringly punctuate the many daily transitions of the helpless worker into a fraudulently empowered consumer? Perhaps. But in the America of 2011, the self-proclaimed political leaders like Cain (who has never even held political office) are as confused by their motives as those compelled to watch these audio-visual abortions on the nation's billions of computer screens. In other words, Herman Cain was asked if his idiotic web video was meant to promote death from smoking, and Herman Cain said no, of course not, because smoking cigarettes "is not a cool thing to do."

If Herman Cain says something "is not a cool thing to do," the weight of his inane proclamation immediately reverses the polarity on whatever he's talking about, so that the subject of this or future "web commercials" -- smoking, shitting in people's mouths, buying life insurance, collecting action figures, painting a child's toenails, taking vitamins, strangling a public school official with the cape from a child's Halloween costume, writing a blog post, etc. -- immediately becomes self-evidently the opposite of what Herman Cain claims. Therefore, smoking is cool again, perhaps the coolest thing since Elvis joined the Army or Charles Manson carved a swastika in his forehead. But Herman Cain and his porn-stached masturbation ogre who exhales into a Handicam, they are the evil opposite of cool, the anti-cool, a dual vortex of shame and degradation.

Confront Herman Cain with this terrifying equation, and he sputters impotently, spittle flying, the elderly host of the news talk program withdraws, cancer strikes at every cell:

When asked if he thought the ad was meant to be "funny," Cain said his campaign "didn't know whether it would be funny to some people or whether they were going to ignore it or whatever the case may be."

"It's not funny to me - I am a cancer survivor, like you," Bob Schieffer said. "I had cancer that was smoking related. I don't think it serves the country well - and this is an editorial opinion here - to be showing someone smoking a cigarette. You're the frontrunner now. It seems to me as frontrunner you would have a responsibility not to take that kind of a tone in this campaign. I would suggest that perhaps as the frontrunner, you'd want to raise the level of the campaign."

"We will do that, Bob," Cain responded. "I do respect your objection to the ad."

Pressed to say something anti-smoking, Herman Cain stalled. As a lobbyist for the chain-food industry, he lobbied against anti-smoking laws in restaurants. The Herman Cains of the world want you to slowly die of cancer in their industrial-murder chain restaurants so you will linger over another slice of rendered-pig pie, and perhaps something from our dessert menu, maybe a colostomy bag of food-colored corn syrup with a THOR-licensed crazy-straw?

But he must say something:

Herman Cain said Sunday that smoking cigarettes "is not a cool thing to do" and denied that a web ad recently released by his campaign was meant to glamorize or glorify cigarette smoking.

"One of the themes within this campaign is, let Herman be Herman," he told CBS' Bob Schieffer. "Mark Block is a smoker. We say, let Mark be Mark. That's all we're trying to say because we believe, let people be people. This wasn't intended to send any subliminal signal whatsoever."

Meanwhile, outside the television studio in Washington, the actual campaign manager stands outside, posing for photographers, smoking and grimacing, a camp performance. There is sunshine and cold outside, darkness and the ideology of the cancer cell inside. A pit opens miles beneath a nuclear power plant in Virginia. A child trips on untied shoelaces and rises with a bloodied lip. Herman Cain is silent in the back of the Town Car on the way to his hotel. [CBS News]