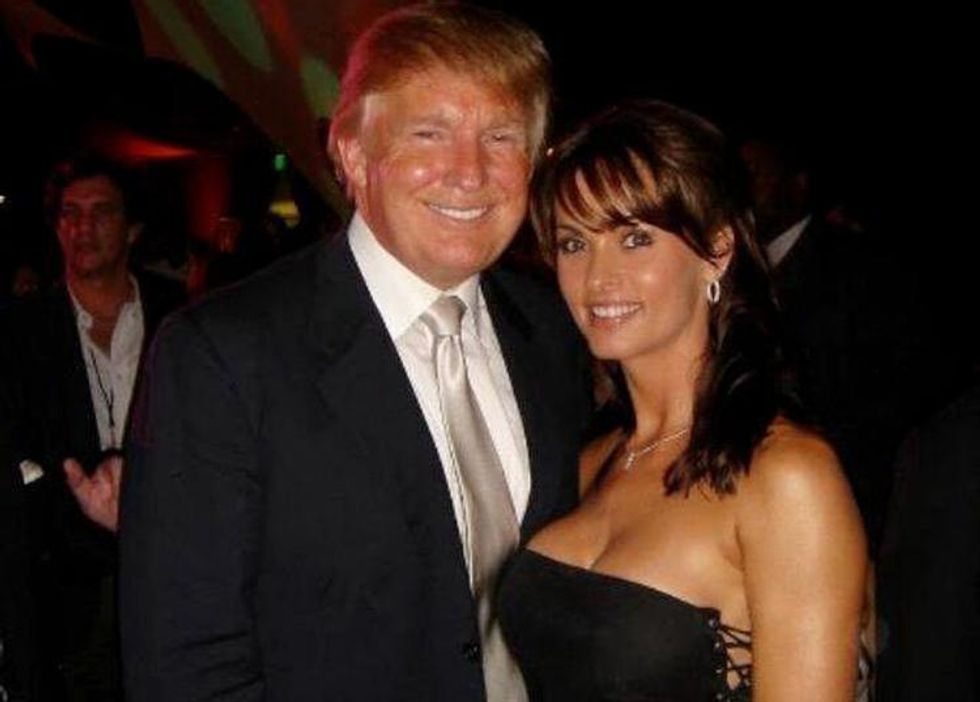 Who's ready for another episode of the long-running cartoon "Trump Junk Goes to Court"? Luckily, the member in question makes a very brief appearance today, just popping up for a quick "intimate relationship" with Playboy playmate Karen McDougal between 2006 and 2007. After that, the only dicks are the lawyers.

Oh, Mr. Mueller! WE FOUND IT right here in Karen McDougal's lawsuit to get out of her hush money agreement.

This case is about a powerful media company taking advantage of the plaintiff, Karen McDougal, with the collusion of her lawyer, to achieve its own political and financial ends.

WHOA IF TRUE! We only have McDougal's version of the story to go on right now, but this complaint makes her lawyer Keith Davidson look really bad. Remember how Davidson asked Michael Cohen for $130,000 for Stormy Daniels's story and he was like, "Yeah, let me just pull that out of petty cash?" Did that number seem suspiciously low to you?

Let's Get Drunk And Talk Some Business!

Davidson, who is based in Beverly Hills, specializes in exactly this kind of transaction. He was once investigated by the FBI for trying to get Hulk Hogan to pay $1 million for his own sex tape. So at first glance it makes sense that he would represent Daniels and McDougal.

On June 13 and 14, 2016, Mr. Davidson met with Ms. McDougal in Arizona. He told her that the rights to publish the story of her relationship were worth millions. Mr. Davidson’s fee agreement granted him 45% of whatever Ms. McDougal received. Over dinner, including multiple bottles of wine, Mr. Davidson falsely told her this was standard in the industry. She signed.

Are Lawyers, Like, Supposed To Lie To Their Clients?

Davidson told McDougal that American Media, Inc. (AMI), had already deposited $500,000 in an escrow account for her, and a seven-figure contract awaited her in California, so she hopped on a plane for LA where she spent several hours telling every little detail of her story to a rep from AMI:

What Mr. Davidson did not tell Ms. McDougal, however, was that (1) AMI is run by David Pecker, a close personal friend of Mr. Trump; (2) AMI has a practice of “catching and killing” unfavorable stories about Mr. Trump; (3) Mr. Davidson himself was involved in catching and killing stories for Mr. Trump; and (4) AMI had shared the details of Ms. McDougal’s story with the Trump campaign. In short, the meeting was a set-up for AMI to hear Ms. McDougal’s story, pass it on to Mr. Trump’s representatives, and prevent it from ever seeing the light of day.

Is it WRONG to pretend to be negotiating a settlement on your client's behalf when you're actually trying to get her story to a third party? IT IS. So Keith Davidson better hope this part of the complaint is not accurate!

It's A 'Business Deal' To Benefit My Friend, Who Just Happens To Be Running For President!

After the meeting, Davidson told McDougal that AMI was going to take a pass. But just as she was closing in on an agreement with ABC, AMI resurfaced with an offer of $150,000 and the promise of article placement in the brand's health and fitness magazines. What a coincidence!

But this time, Mr. Davidson told her, they would buy the story not to publish it, because Mr. Pecker (AMI’s CEO) was a close friend of Mr. Trump.

HUH. Well if AMI killed her story to influence the presidential campaign, then that's an illegal corporate campaign contribution. (Common Cause already filed an FEC complaint on that one.) And a contract to commit a crime is always unenforceable -- if you hire a hitman, and he fails to bump off your cheating husband, the courts won't help you. So McDougal wants the Court to declare this contract void for illegality.

But, hey lookie here! Last month, the New York Times reported that immediately after persuading McDougal to sign, Davidson called up Trump's personal lawyer Michael Cohen to tell him the deal was done.

O RLY? What the hell did Donald Trump's personal lawyer have to do with this case? Unless he was a silent party to the negotiations the whole time on behalf of Trump and the campaign. Oh, gosh what is the word for that?

Oh, right. COLLUSION. Or in boring lawtalk, conspiracy to violate campaign finance law. These lawsuits are going to be fuckbonkers insane!