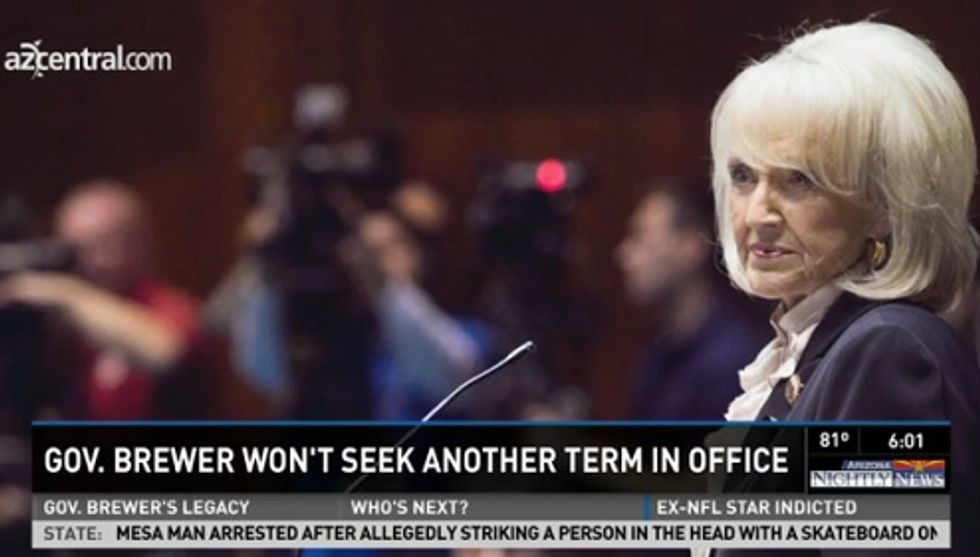 Jan Brewer announced Wednesday thatshe will not seek another term as Arizona governor, a move that seems to indicate she is no longer the insane harpy who was mostly known for shaking her finger in Barack Obama's face and worrying about illegal aliens leaving decapitated corpses all over the desert. Brewer said the usual blandly pleasant things, as one does, and said nothing definite about her future plans:

“I’m saddened to be leaving this post next year but I’m proud of the remarkable progress we’ve made for the state,” Brewer said, adding that being governor has been her “proudest role.”

“I will continue to champion and cheer Arizona from the sidelines,” she said.

Wonkette congratulates Gov. Brewer on her decision to get out while the getting is good, and to avoid the iffy court challenge she'd have to pursue, not to mention the near-certainty of a primary challenge from nutso teabaggers who think she betrayed them, America, and their yellow snake flags.

For all her talk of being ready to move on, Brewer's decision almost certainly hinged on the unlikelihood of getting past Arizona's term-limit law; the state constitution seems pretty definite on that:

“No member of the executive department after serving the maximum number of terms, which shall include any part of a term served, may serve in the same office until out of office for no less than one full term.”

Brewer aides had claimed that there's some wiggle room in that phrasing, since Brewer only served out the final year of Concrete Blonde lead singer Johnette Napolitano's term after Napolitano was appointed to head the Department of Homeland Security in 2008. Rather than trying to argue in court that an inherited partial term was constitutionally different from an elected partial term, Brewer will now be free to spend more time flagging down Mexicans to check their papers.

Also, too, there's a sense among the teabagging wing of the Arizona Republican party that Brewer has totally betrayed them, despite her glory days of signing the state's "papers please" law and shaking her finger in the president's face because he didn't give her dumb book 5 stars on Amazon. (Seriously, did anyone remember that the finger-shaking was about her book? God knows we'd forgotten.)

And while Brewer was a temporary hero for treating the Kenyan Usurper with all the dignity the office deserves, she later lost the love of teabaggers for being a socialist who went along with Medicaid expansion under Obamacare and then vetoed the religious freedom of all Christians in Arizona. Hell, she didn't even agree on something as obvious as the indisputable fact that Santa Claus has to be a white man.

Wonkette wishes Jan Brewer well in her future endeavors. And we genuinely can't wait to see what collection of teabaggers, doomsday preppers, and end-times loons fight it out for the nomination, not to mention the pretzels that the "establishment" GOP candidate gets tied into as they try to appeal to the both the "barking mad" and "merely rightwing" constituencies. Come sit on the couch with Yr Wonkette; we'll make popcorn.