Let John McCain Berate And Shame You, Especially If You Are A Republican 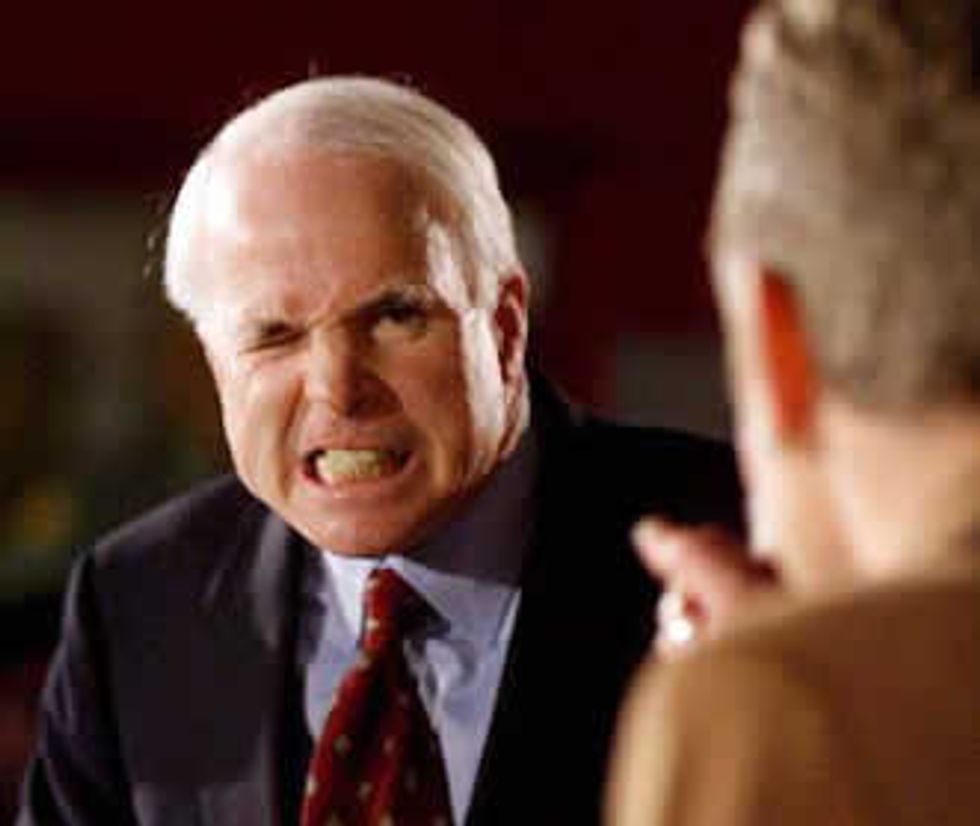 Remember back in 2008 when we were all briefly terrified that John McCain might win the presidency and then die and then Sarah Palin? As it turns out, WALNUTS! is winning his battle against actuarial science quite handily!Here he is on the floor of the Senate, looking more alive than Mitt Romney ever has, just cold yelling that everybody is A Idiot, especially Republicans.

First, he gets all hotted up about death benefits for the families of slain soldiers:

Well my friend, some of them think "Damn that Obama, using his Hitler Powers to personally queef on The Troops!" Others think "My stars, those ninnies in Warshington just can't get together!" And then there's the informed, intellectually honest reaction that goes something like "Fuckin Ted Cruz." McCain then commits the cardinal sin of acknowledging the results of the 2012 election:

"We started out with a false premise here on this side of the aisle. And that was that somehow we were going to repeal Obamacare [...] That's after a 2012 election... in which I traveled this country with passion, the first thing, saying the first thing we're going to do when Mitt Romney is president of the United States is repeal and replace Obamacare, and the American people spoke!

We actually made a face like "Say what?!" when we heard that last part. Free-associating now, he somehow works the Chinese into his act:

"Meanwhile, the Chinese -- great role models of democracy -- are now criticizing us because of a looming failure for the American government to pay its debts both domestic and abroad."

Ironically, we are in this mess because our awesome democracy gives very stupid people a role in shaping public policy, even if they have no goddamn clue how it works. But please proceed:

Wow, talk about Maverick City! McCain had a chance to pull off the Full Awesome here, but he blew it:

Who it is is "John Boehner," and how it's shaped is "John Boehner lets the House vote on a clean continuing resolution." See? No sitting down needed, even! So can we please stop pretending there needs to be a negotiation over doing what EVERYONE AGREES SHOULD BE DONE?! Forget all of Obama's boring analogies about buying a house or de-worming your horse or whatever, and let's just focus on YOU DO NOT GET A PRIZE FOR DOING A THING YOU SAY YOU WANT TO DO.

We are now one week away from a majority of Americans blaming Obama for the shutdown, because he won't negotiate.