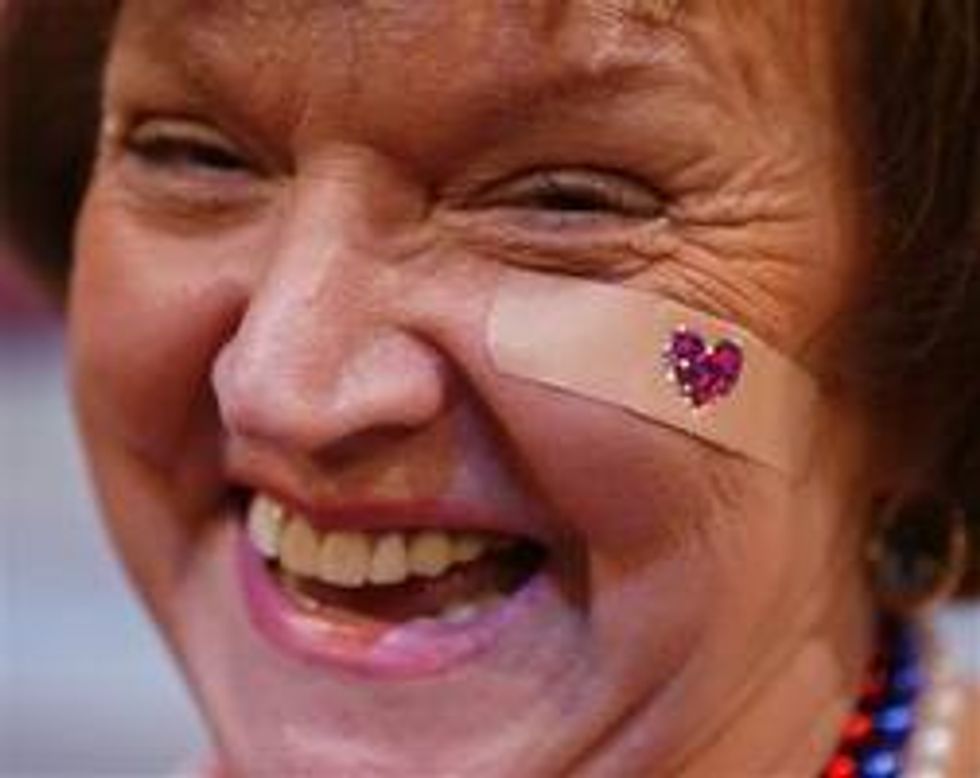 Are you sick of hearing about Chuck Hagel? We aresick of hearing about Chuck Hagel too, but there are so many pearls of wisdom and hidden insights in this New York Times article about him that we cannot resist sharing it with you. For example: did you know that being a war hero does not give you any credibility whatsoever, unless you happen to be speaking in favor of more war, in which case, please step up to the mike? Also, did you know that there is such a thing as “mainstream internationalism,” and that Bill Kristol is the perfect spokesperson for it?

For example, here is William Kristol, who never met a war he didn't like, explaining why Hagel is totally outside the mainstream in his reluctance to send other people's kids to fight and die for, say, oil:

William Kristol, the editor of The Weekly Standard, who championed the Iraq invasion and is leading the opposition to Mr. Hagel’s nomination…said he and other like-minded hawks were more concerned about Mr. Hagel’s occasional arguments against sanctions (he voted against some in the Senate), what they deem as his overcautious attitudes about military action against Iran and his tougher approach to Israel than they were about his views on Iraq — aside from his outspoken opposition to the American troop surge there that was ultimately deemed successful. […]

“I’d much prefer a secretary of defense who was a more mainstream internationalist — not a guy obsessed by how the United States uses its power and would always err on the side of not intervening,” [Kristol] added. Of Mr. Hagel and his allies, Mr. Kristol said, “They sort of think we should have just gone away.”

What is a “mainstream internationalist”? We do not know. We do not actually think that Kristol knows, given that we did a quick search of his columns and can’t find anything with those words. We CAN, however, find lots of examples wherein Bill Kristol is either totally ignorant about key issues that are pretty important to the international community, or totally derisive to the international community and its ability to exist independently of American authority.

So we guess this means that anyone who doesn’t think EXACTLY LIKE HE DOES is not “mainstream,” and as for “internationalism,” we think it is code for “a willingness to ignore the international community except for occasions wherein invading other countries directly serves American economic interests.” This is just a guess though, because we can't find any other uses of the term.

Another fun fact: a decorated war hero is a really credible spokesperson for military strategy and foreign policy, except for when he is not advocating for war, in which case, he just becomes annoying and will he SHUT UP already about his Purple Hearts because what does he know about Keeping America Safe?

Besides being a member of the Senate Foreign Relations Committee, Mr. Hagel had added cachet by way of two Purple Hearts from his service in Vietnam, which left shrapnel embedded in his chest and, he has said, a unique perspective on war.

“Here was a Republican with national security credentials saying that the Republican president was being irresponsible on national security — that’s potent,” said Kenneth L. Adelman, a member of the Defense Policy Review Board at the time and a frequent sparring partner with Mr. Hagel on television. “It drove me up the wall not so much that he was Republican, because I didn’t care that much from a political point of view — I thought the substance of his arguments were just wrong and unfounded.”

So many fascinating kernels of wisdom embedded in these few paragraphs. First, we have the assertion that actually going to battle and BEING in a war gives you a "unique perspective." We thought that chickenhawks had the "unique perspective" given that they were super into doing something that they themselves had never deemed important enough to participate in, but whatever. Also too there is the fact that someone with "national security credentials" is using those credentials in advocating for his position, which leads people "up the wall"  because his experience with war conflicts with their uninformed view of it.

Mr. Hagel’s earliest concerns arose before the Congressional vote authorizing the use of force. “You can take the country into a war pretty fast,” he said in an interview with The New York Times in 2002, “but you can’t get us out as quickly, and the public needs to know what the risks are.” In the interview, he took a swipe at Mr. Perle, then one of the most visible promoters of the war, saying, “Maybe Mr. Perle would like to be in the first wave of those who go into Baghdad.”

Mr. Perle had never served in the military. Along with Mr. Hagel’s comment in Newsweek that many of the war’s most steadfast proponents “don’t know anything about war,” his criticism prompted a national discussion about “chicken hawks,” a derisive term for those advocating war with no direct experience of it. And his comments drew a rebuke from The Weekly Standard that Mr. Hagel was part of an “axis of appeasement.”

Mr. Hagel’s words appear to sting to this day. “Normally you hope your cabinet officers don’t resort to ad hominem argument,” said Mr. Perle, who is now a fellow at the American Enterprise Institute. In an interview, he said his opposition to the nomination stemmed from his fear that Mr. Hagel was among those who “so abhor the use of force that they actually weaken the diplomacy that enables you to achieve results without using force.”

Ha! Ha! Ha! Someone from the AmericanEnterpriseInstitute is SHOCKED, just SHOCKED, that Mr. Hagel resorted to "ad hominem" arguments, which is really beyond the pale. (Also, spoiler alert: Mr. Perle declined to join up and go to Baghdad.) Anyway, here is the piece de resistance, which tells us more about the state of our media than Chuck Hagel or Bill Kristol:

If Mr. Hagel’s call for caution seems prescient, several opponents have argued that his prediction that the 2006 troop surge would fail was not — a position sure to come up frequently as confirmation hearings get closer.

First of all, we are pretty sure that this is not a complete sentence, but we are not experts in grammar so we are open to opinions to the contrary. Also, the surge DIDfail by most measures, but do not count on the New York Times to tell you so, because this would be "bias."