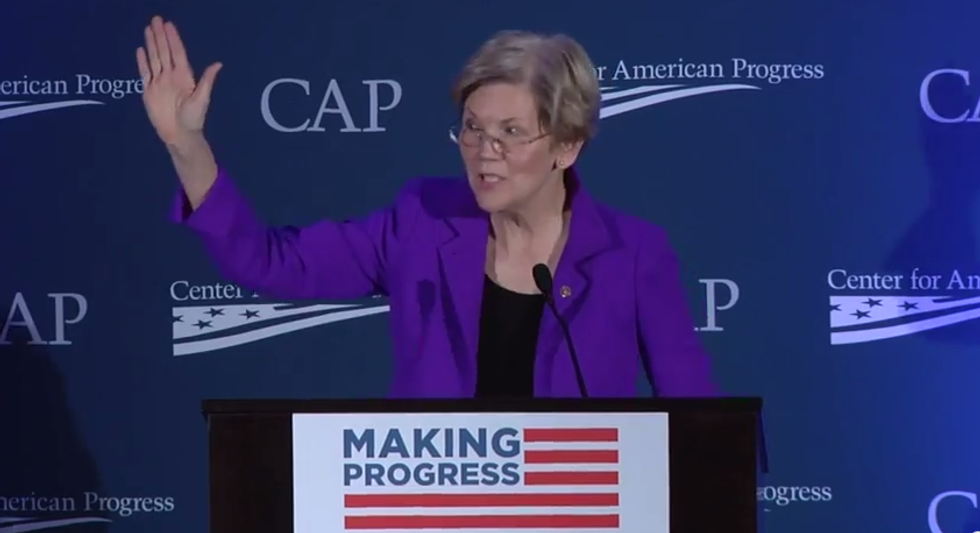 On Wednesday, Sen. Elizabeth Warren spoke at the Center for American Progress where, as we've come to expect from her, she used her big ol' professorial brain to little-wordsplain at us how America used to be, how it should be, how Republicans effed it all the heck up, and how we can make it better.

The whole speech is fantastic, and you should watch it because you will want to stand up and cheer and say "AWWWW YEAH, Elizabeth Warren for all the things!" (And then get your very own Elizabeth Warren mug, comrades.)

But here's an appetizer to whet you:

And then, starting in the 1980s, the story changed. The Republicans argued for a new way to build the economy. First proposal? Fire the cops. Not the cops on Main Street. The cops on Wall Street.

Now, they called it deregulation. But the impact was exactly the same. Cut the regulations, cut the oversight, and turn the biggest financial institutions loose. Let ‘em make money any way they want.

And then second, cut taxes for those at the top. And when you’ve cut ‘em all you can, cut ‘em again. So how do you pay for that? Well, pay for it by cutting funding for just about everything the federal government does to invest in opportunity for the next generation.

The Republicans have a pretty simple philosophy. They say that if those at the top have more — more power for Wall Street players to do whatever they want, and more money from tax cuts — then somehow they can be counted on to build an economy for everyone else.

See? It's all that good. Watch it. Learn it. Live it. Love it. You're welcome.