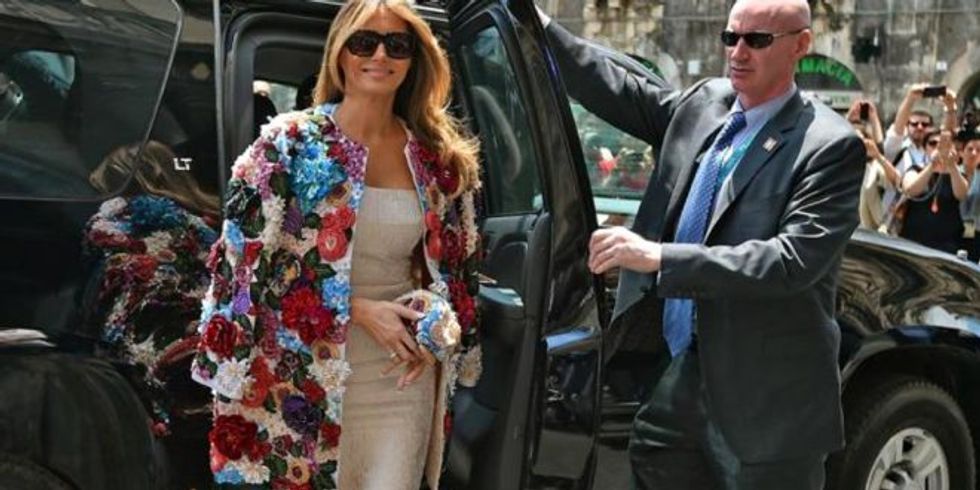 During her big trip abroad with her terrible husband, Melania Trump wore a bunch of outfits. Which makes total sense because WHAT? Is she gonna walk around naked? Obviously not, unless it is for art or an ad campaign of some kind. Many of these outfits were very expensive -- in particular, a Dolce & Gabbana jacket she wore in Sicily that cost $51,000, pictured above!

Noted fashion site Breitbart, where all the insiders go for the best sartorial advice, did a whole fawning article about the clothes she wore on her trip.

It is actually really kind of adorable the way Breitbart scribe John Binder really tries so hard to do the fashion writing:

When Melania arrived in Saudi Arabia, she opted for a flowing black jumpsuit by Stella McCartney coupled with a striking, over-sized gold Saint Laurent belt made of python to cinch her thin frame. The belt could be viewed as a nod to the Trump family’s famous sky-high, opulent gold apartment in Trump Tower in New York City.

I mean, come on. You know this dude has no idea who Stella McCartney even is.

Naturally, the always-charming denizens of the Breitbart comment section joined on in the fawning... but not without saying a number of unbelievably tacky, racist and transphobic things about Michelle Obama, because they are vile human beings.

SPEAKING OF WHICH! As The Airborne Toxic Event frontman Mikel Jollett pointed out in a viral tweet yesterday, let us note that Breitbart had a VERY DIFFERENT TAKE on the $2,300 Carolina Herrera dress Michelle Obama wore to see the Pope.

Slightly hypocritical, no? Apparently, Michelle Obama is a terrible person for wearing a $2,300 dress, but it is totally fine for Melania to wear a jacket that costs only slightly less than the average American's yearly income so that she may properly, uh, radiate or whatever.

There is one thing that everyone is ignoring here, however, and that is that Melania is a total sucker who paid $51,000 American dollars for a jacket that literally looks like it is made up of the the weird tissue flowers we used to make in art class in elementary school. Remember those? Like, they'd give you colored gift-wrap tissue and you would scrunch it up and dunk it in Elmer's Glue and BOOM, flowers? And then you'd probably fuck it up with too much glue and end up with a flower that mostly looked like you had sneezed all over it? Well, if you made a giant one of those, in the style of your grandmother's couch, and then turned it into a jacket, that would be the jacket she is wearing.

I mean, it's not hideous. It definitely belongs in the "HMMM...Is it hideous or is it fabulous" category of clothing that I tend to prefer myself. If it were at a thrift store or at Marshall's for like, 20 bucks, I would almost definitely buy it. But like, $51,000? Pssht, they saw her coming a mile away. A MILE AWAY.

You spend $51,000 on a jacket, especially a jacket you are probably only going to wear like one time ever, I don't care how much money you have -- you are a sucker. Seriously? How stupid do you have to be to even purchase something like that?

So, duh, of course Stefano Gabbana is kissing her ass on Instagram.

Suckers with lots of money are great for the fashion industry, which is probably why Dolce and Gabbana love her so. It's not like they're gonna find anyone else to sell these incredibly racist earrings to!

Do you have any thoughts about Melania's dumb fashion choices? LET US KNOW, IN THIS, YOUR OPEN THREAD!

Click below to give us money with which to purchase stupid flower jackets! Or pay rent! One of the two!