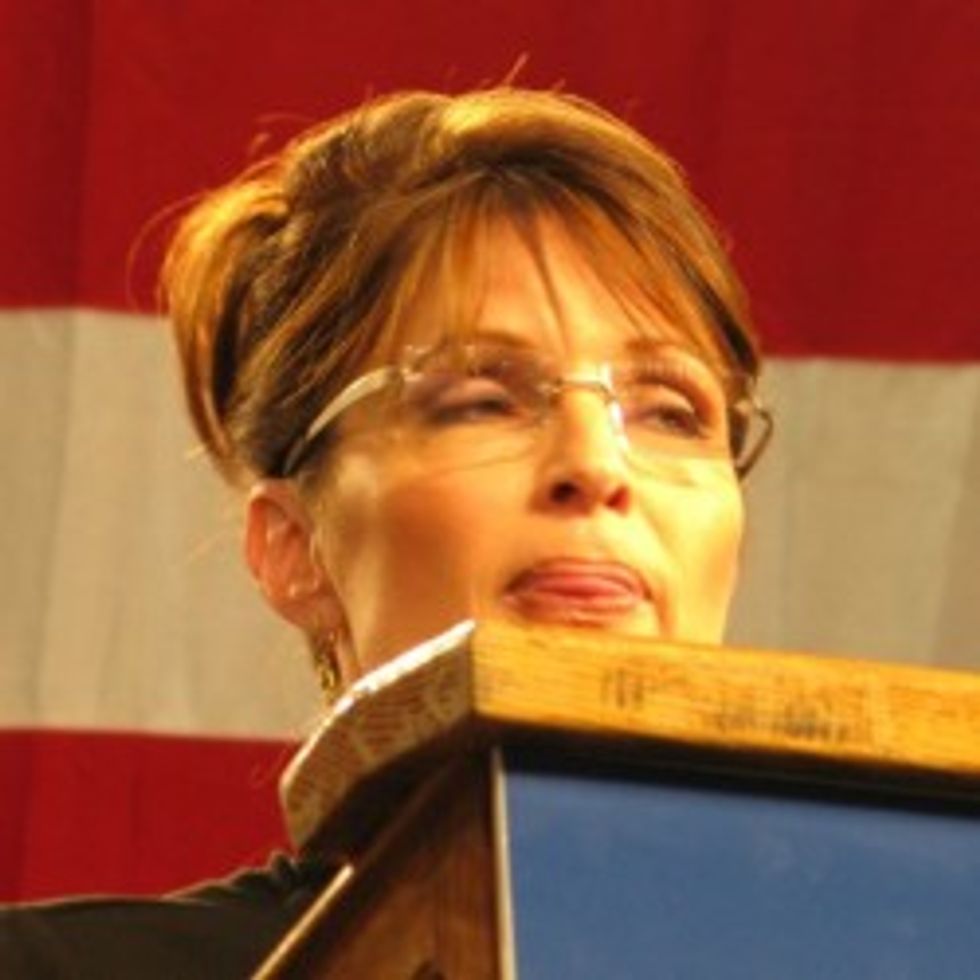 Here comes Sarah Palin, to stand for God, Country, Freedom, and Taco Bell. She breaks the mold. Turn on your span, let's watch this shit!

12:08: UH OH! It is that asshole Ted Cruz, the one with the Jerk Baby, instead! Is Sarah Palin lost somewhere? Are they filling time while she has a fucking snit about the color of the backdrop or the brown M&Ms? We are going to go with "gigantic temper tantrum backstage."

12:10: Sarah Palin can pick winners, says Ted Cruz, who is the very definition of a "winner."

12:11: Oh man, Sarah Palin has her own theme song now, "She Is A Mama Grizzly." That is ... perfect, really. That way she won't get any cease and desists when she uses music by anyone else on the planet.

12:13: It's not about the bad guys. It's all about the lead. "Background checks? Yeah I guess to learn more about a person's thinking and associations?" And then there's the Trumpian birther stuff we guess? That we should have learned more about Obama's background? Birther stuff is a little odd coming from Sarah Palin, of course (BECAUSE SHE DID NOT HAVE HER OWN BABY).

12:14: Sarah Palin promises an adult conversation. How much does she charge for that? DAMMIT WE MADE A SEX WORKER JOKE GAH.

12:17: No government giveaways from the GOP, according to Palin. And that is true! Unless you are someone whose taxes Paul Ryan wants to starve some grannies in order to slash.

12:18: Eight percent unemployment rate! pooh-poohs Sarah Palin, which does the double duty of being wrong and being ... erm ... let us call it "historically forgetful."

12:19: La Palin is now on the rightwing talking point about how the Senate has not passed a budget in four years. You will forgive us (we pay Kris Benson to know stuff about the budget for us), and please do correct us if we are wrong, honestly, but: isn't the continuing resolution the Senate keeps passing ... a budget? It just says "everything will be the same pretty much as last year"? Let us know

12:22: Mr. President, you won. Accept it. Now stop acting like that means that your ideas can become policy and also too stop manufacturing crises by ... what, murdering the House leadership so there are no more crises or opposition? Also teleprompter zzzzzzzz.

12:24: Sarah Palin wishes Barack Obama would respect We the People, but only the ones who did not vote for him, obvs.

12:25: Here is the portion of the speech where Sarah Palin fellates machine guns like Ted Nugent is always begging Nancy Pelosi and Old As The Hills to do.

12:26: Also, Sarah Palin made a joke about her boobz. We are okay with that. We talk about our boobz a lot too.

12:28: Sarah Palin says CPAC should share its message of freedom and liberty for all. Well, maybe not all.

12:29: We'll never win the contest of Identity Politics, and we shouldn't even try. (SHE IS TALKING ABOUT BLACK PEOPLE AND WHATNOT.)

12:30: Free Obamaphones AND "prophylaxis"? Mamas of preggers teens shouldn't knock the condoms off other people's dicks.

12:33: Sarah Palin calls for some Socialism, in the form of the people owning the natural resources, which is the same Socialism she did in Alaska when she taxed the shit out of the oil companies and sent Alaskans their share of The Syndicate.

12:34: Sarah Palin just subtweeted the hell out of Karl Rove.

12:35: I've been so blessed to get to know Americans through book tours rather than through actually doing anything.

12:36: Sarah Palin tells other people to get over themselves, as they are not Sarah Palin. Then she slags on the cost of college tuition. We wonder which party has tried to do something about college tuition? Oh well, we can probably never know.

12:37: Why does Barack Obama give money to terrorists instead of the White House tours? (Drink yourself to death like in Leaving Las Vegas.)

12:37: Sarah Palin wants CPAC to save their movements.

OK THE END. We are off to go die now.

12:39: Goddamnit, now Steven Crowder is on our TV, and we cannot stay, we got Saturday shit to do. Here, go here instead.