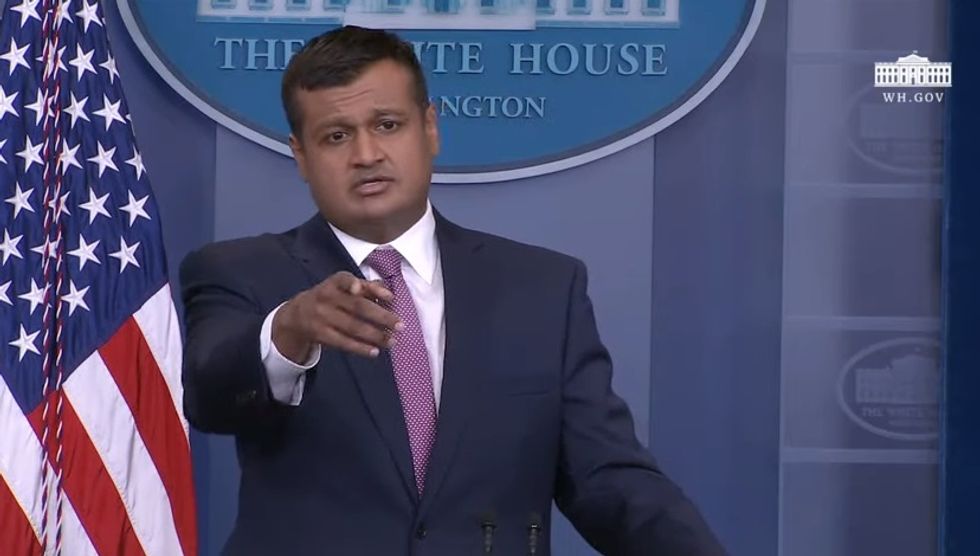 Deputy White House press secretary Raj Shah took over the daily press briefing duties for Sarah Huckabee Sanders Thursday, and it was something of a milestone: It was the first White House press briefing delivered by an Indian-American, so welcome to the record books, Mr. Shah. It was also the most embarrassing press briefing by an Indian-American, but we bet he'll get plenty of chances to top himself. How badly did it go? Badly enough that even top media equivocator Chris Cillizza called it "disastrous." Still, there were some good things about it: For starters, in a rare departure for a White House where no one ever admits to errors, Shah at least said, "I think it's fair to say we all could have done better dealing with this over the last few days." Unclear yet how many times he'll have to write on the chalkboard "WE NEVER MAKE MISTAKES. YOU ARE FAKE NEWS."

For another thing, he made a nice snack for the assembled reporters. Once he finally showed up, at least. The press briefing was delayed, and delayed, and... CNN's chyron started getting pissy about it:

Once Shah finally came out, things went weird right from his opening statement, with the bizarre claim that the White House had no choice but to keep serial wife-beater Rob Porter on as staff secretary (a higher position than it sounds, because, you see, he's a man secretary, not the lady kind), even though the background check for his security clearance turned up the allegations of spousal abuse. You see, it was a long time ago, and also he denied it, so how could they step in before the FBI background check process was completed and a determination made?

Huh. For a hiring decision involving a high-level White House staffer, we're pretty sure they really could have let him go if that was holding up his security clearance, even if the accusations didn't meet the same standard as a jury trial. This is the same White House that told us a few million times Donald Trump was entitled to fire James Comey for any reason -- or no reason at all. Fairly sure the staff secretary doesn't have more protection from firing than the FBI director. Once Shah got through that bit of nonsense (during which he also misused "fulsome" twice, as if it meant "complete," and no it does not mean that, everyone stop it!), it was time for the press corps feeding frenzy.

You see, John Kelly was only defending the honorable guy that he knew (and who couldn't get a security clearance because of the whole wife-beating thing). Then, only yesterday, Kelly became "fully aware" of just how actually bad wife-beating is (Translation: at least once people started making a stink about the photos).

Q: "Did he know any of this back in November?"

Shah: "I'm not going to get into the specifics." pic.twitter.com/RsQOoZHxDs

Of course, that's now been undercut by a report late Thursday at HuffPo that says Porter just flat out failed to qualify for a security clearance and Kelly decided to keep him on anyway:

a Republican close to the White House [...] said Kelly received word last fall that Porter had failed his security clearance investigation because of the domestic abuse reports. Porter at that time told Kelly he would leave the White House in December but agreed to stay at Kelly’s urging, the Republican said on condition of anonymity.

Another weird moment came when Shah said Porter had been "terminated," then immediately turned around and said, without any indication that he'd misspoken, that Porter had resigned:

We're not sure this is worth getting too excited about, because really, fired, quit -- in this administration, no one ever really seems to be clear on that. Why does anything happen in this mixed up crazy world, and how can we know what is even real?

Then there was this WTF moment:

Again, we won't claim to be experts on investigative procedure, but we'll go out on a limb and say we doubt a denial always has the same level of credibility as, say, police reports and a judge granting a protection order. Or did Porter have a photograph of his denial, perhaps?

Along the way, Shah didn't exactly deny reports that Hope Hicks, who's said to be dating Rob Porter, had helped draft Kelly's statement praising Porter as "a man of true integrity and honor," saying only that all of the White House statements supporting Porter were drafted by multiple officials -- but that Hicks "did recuse herself from some matters" involving Porter. Because now Hope Hicks is the Attorney General or something. (But was it a fulsome recusal?)

One of the best -- but alas, completely unanswered -- questions came from Noah Bierman of the LA Times, following up on John Kelly being "shocked" only when he became "fully aware" of what domestic abuse looks like:

What about women who don't have photographs? Do you trust their stories? Because a lot of times [...] Sarah's said that allegations weren't credible from other people. Do you need a photograph, and how should women feel if they don't have a photograph?

Damn good question! Unfortunately, Shah sidestepped completely: "I don't think any standard applies -- I just think that -- we do take allegations of misconduct, of domestic violence, other issues like that, very seriously." Then he repeated that the White House was relying on the investigative process to be completed, which in this case it wasn't before Porter was forced out. Which is of course complete deflection, but it does at least confirm one thing: This White House has no standards.

Also, Shah gave a dumb scripted answer -- "witty" doesn't work when everyone sees you opening a page in your briefing book -- to a question about Omarosa, which you can read about elsewhere because come on, really, with everything happening at the moment, someone asked about Omarosa? Forget it.

Welcome to the podium, Mr. Shah; you definitely have the potential to worm out of answering questions as well as your boss does. Nicely weaseled, and how on earth do you live with yourself anyway?