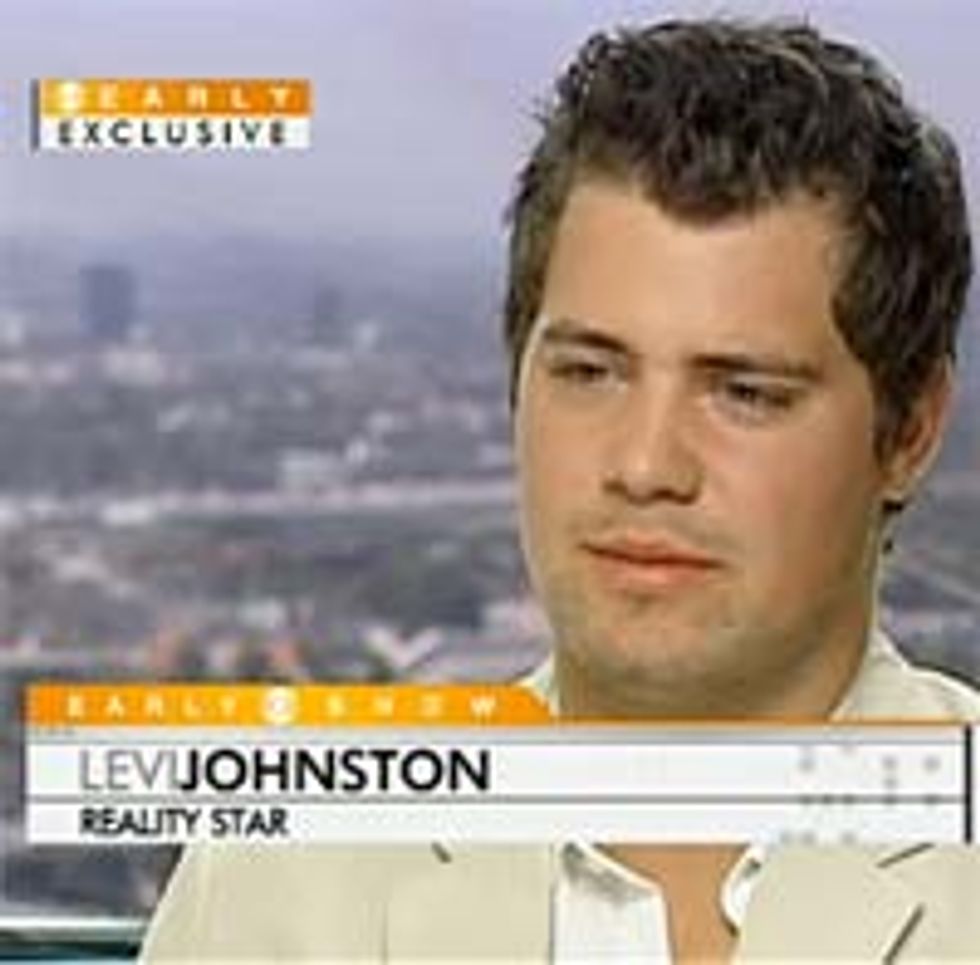 Oh, hey, did Levi Johnston do something to get his handsome but incipiently doughy face on TV again? Apparently! Or, at least, he said something noteworthy once he conned his way onto the CBS Early Show (though how hard could that have been, those people are desperate for stuff to put on the air and you can't have a bear with its head stuck in a jar every day of the week, can you?). We suppose he got on CBS by being, as the chyron in the picture indicates, a "reality star," which is better than being a movie star because movies are only movies whereas reality is real life, man. Anyway, Levi does not have a jar stuck on his head, but does have some less-than-complimentary things to say about his ex-future-mother-in-law, again.

Does Levi even know what the word "regret" means? Can he even form the word with his mouth? Thanks to years of speech therapy, he can, but he doesn't like it.

I don't really regret anything. But the only thing I wish I wouldn't have done is put out that apology, 'cause it kind of makes me sound like a liar. And I've never lied about anything. So that's probably the only thing.

What apology is this? Oh, it's the one that Levi came out with right around the time he and Bristol briefly got re-engaged, where he took back all the mean stuff he ever said about Sarah Palin (i.e., literally every word he said or wrote in 2009 and the first seven months of 2010). Levi says that the apology was written by Bristol and sent out to the magazines, which he signed off on because "trust me, it's easier to make [the Palins] happy ... If you gotta live with them, you gotta make them happy." Ha ha, it sounds so terrifying! You can see the fear in his eyes!

If you've never actually heard Levi speak, you really ought to watch the clip on the CBS site, as he comes off as even dumber than you probably already think he is. Still, the lad has a certain native profundity to him. At one point, when asked about his lust for fame, he says this of his former betrothed, now a star of reality in her own right: "I don't think I'm any more obsessed with making a career out of this than she is." One is left to contemplate the entire nexus of banal horror and empire-in-decline encompassed within that single deictic pronoun, "this." [CBS]