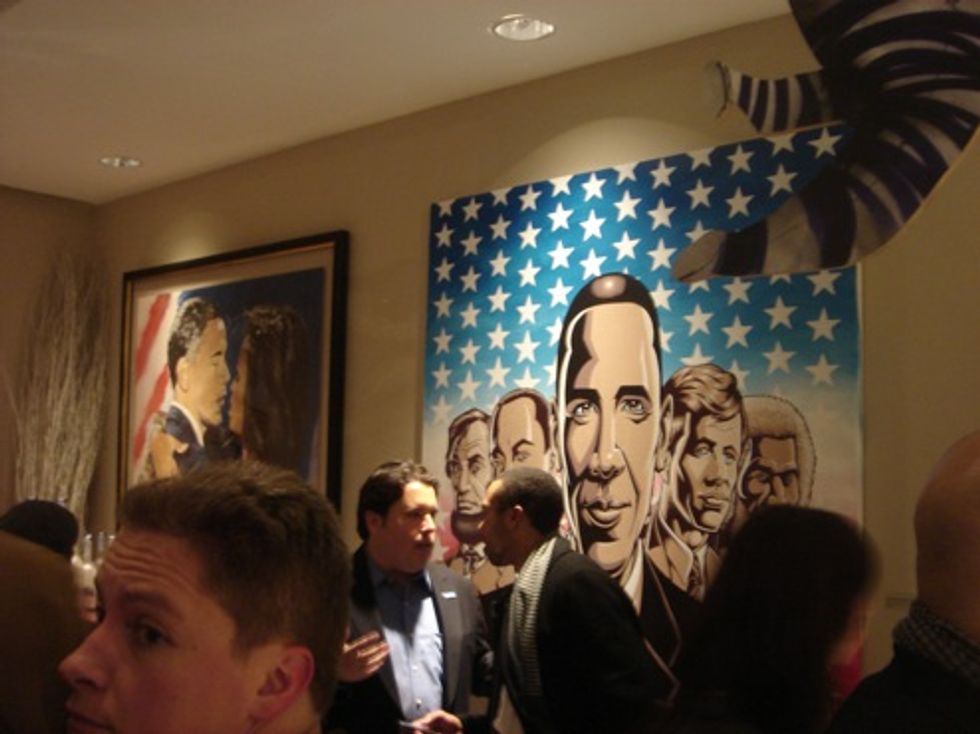 So the absolute most worthless people on this rotten planet are liberals, filthy rat-sucking liberals, particularly limousine liberals from liberal Hollywood and their east coast enablers, the Non-Profit Outreach Directors. They get together for these Red Bull-fueled art parties on either coast a couple of times a year to literally masturbate to themselves. They have NO FOOD at their parties because they are all gay, and anorexic. We went to one of these parties last night, and just you wait for this blush of libtardation: "The MoveOn.org, SEIU, Obey Giant Manifest Hope DC Party." It was actually pretty cool and we don't mean any of the nasty things we just wrote. (But seriously, no food.) Sexy picture time!

The room of this place in Georgetown was very very white, to honor Barack Obama!

Hey look it's Barry with Bobby Kennedy and some other superhero dudes who cared about black people! Oh and on the left that is Barry having sexytime with his wife. Disgusting.

Here's an armless black gal (Malia) hiding in the tulips as Obama levels a Christian settlement in "Real America." Less than two hours!!

Fuck whoever made this. Buy some shiny gold construction paper, mesh Obama's face with guess-who, throw some Elmer's glue on that shit and douse it with fucking sparkles. "Wow."

It's Obama the hobbit, preparing to dine on a fresh winged beast at his weekly pagan bonfire with ogres and goats and "Allah."

(Now's as good a time as ever to run through the celebrity list, btw: Moby was there and he was kind of a dick, right? Rosario Dawson was there and looked pretty but eluded us. Michael Stipe was standing in the crowd in a blue hat, and Wonkette's roommate touched him on the back, only to be scolded by his mean bodyguard. Tim Robbins was there and he's 18 feet tall and silvery-colored. We tried to somehow marry Heather Graham while we had her in the room, but she escaped.)

Sara K. Smith says, "Is that Paul Rudd in the picture?" Sara's so unbelievably retarded, right? That's obviously Shepard Fairey talking about, uh, Obama. God, we would kill to be Shepard Fairey right now. That Hope poster has (deservedly!) become an iconic piece of American art. $$$?

Whoa hey it's De La Soul performing! They were old and fun.

After walking to the Huffington Post party only to find that Arianna was physically kicking everyone out, and then asking the several doormen if we could just go in for a few seconds to take a piss (refused), we walked back near the "rear end" of the Capitol. We met a psychopath who tried to convince us that the CIA -- "which is basically just George Bush Sr." -- controls John Roberts, Michael Mukasey, and Rick Warren, and they're going to force Obama to restart Iran-Contra with special radiation treatments... truly, a new flavor of insanity that we were pleased to hear.