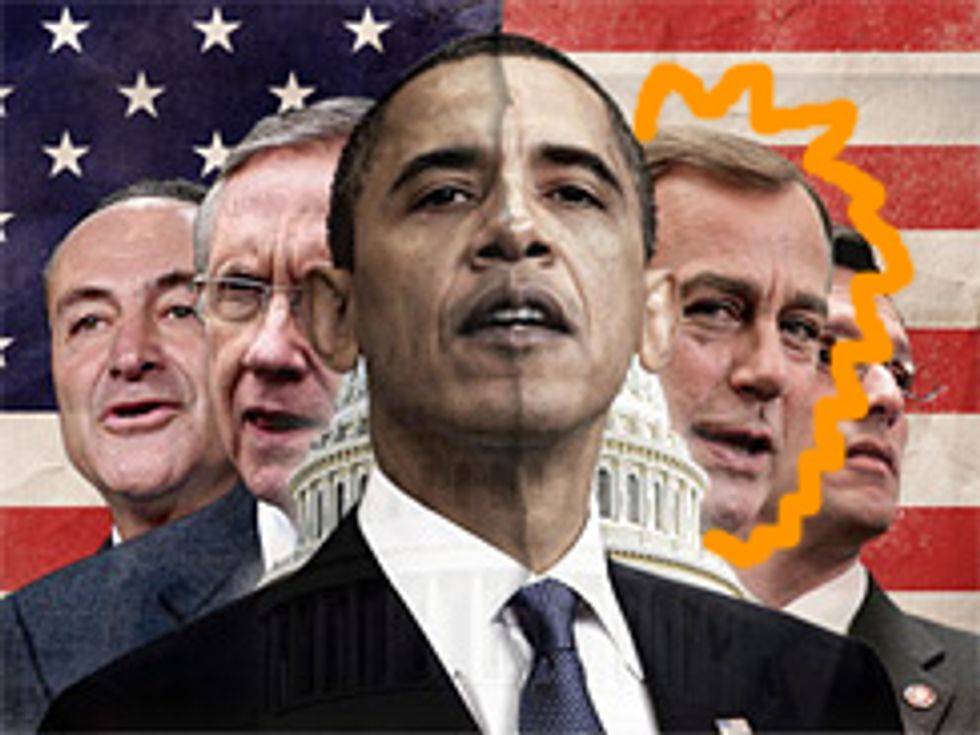 One graphics intern or another at CBS' news website decided it would be a good idea to create an image, for a story about upcoming law-making gridlock, of Obama's face split in two, featuring a weird scar and a new, whiter half-face. This white face, however, happens to be on the "Republican" half of the image. (Though they did forget to give John Boehner's face an orange shine. We had to add that.) CBSmust have been making some kind of "Star Trek" reference, of course, which is what the KKK always used to say. Newsbusters and other conservative sites picked this up and said it was VERY RACIST. Not against black people, for lightening Obama's skin, mind you. It was racist because CBS had the gall to imply that Republicans are more white than Democrats.

The obvious explanation for this photo, other than that it’s a tribute to Frank Gorshin and Star Trek, is that it is meant to illustrate the shift in the balance of power in Congress (with Democratic Senators to the President’s left, GOP House members to his right), and that the racial subtext was inadvertent. If so, the photo’s creators and subsequent editors suffer from a tone-deafness to rival Jon Stewart.

Apparently on one episode of the original teevee show, Gorshin played an alien who looked like one of those black-and-white cookies they have at the delis in New York. And that, somehow, relates to Congress? This is all very confusing. STOP TRYING TO MAKE JOKES, MEDIAITE.

We reached out to CBS, and a CBS.com spokesman told us, “Our intention with the “ripped paper” overlay effect down the middle was to convey a divided Congress and nothing more.”

So they are saying Obama's face is nothing more than a kindergarten construction-paper project? Pure libel.

While it is fair to point out the photo’s underpinnings, as many conservative blogs did, it is telling that, in their zeal to paint CBS in an unfavorable light, none of them bothered to contact the network for their side of the story.

Shut the fuck up, Mediaite. That would go against the whole concept of what it means to be a conservative blog. [Mediaite]