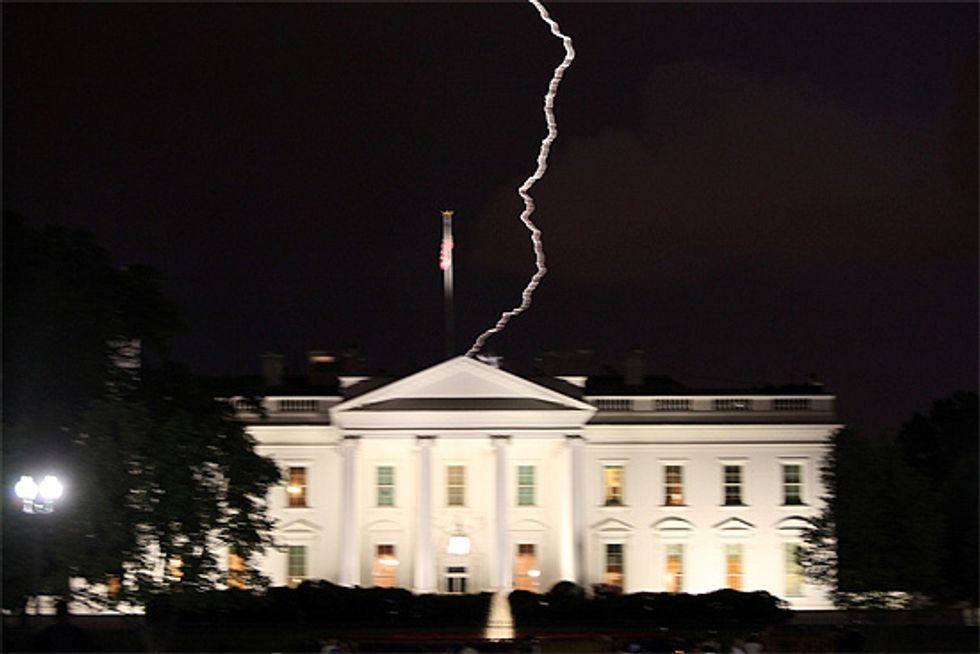 Conservatives are postively livid this week that their messiah rose from the dead once again Sunday to see his shadow and declare there would be six more weeks of hunks of chocolate shaped like rabbits and chicken eggs and Obama didn't put out a statement about it. Obama was too busy running his three wars to acknowledge the day Americans gather to put fake neon grass into baskets and drop unfertilized baby chicken capsules into vinegar and food coloring? OF COURSE. TYPICAL. But according to the-wolrd is-ending blog Now the End Begins,lightning struck the White House and now the world is ending because God is mad at him or something.

Barack Hussein Obama ignored Easter yesterday. He issued no statements of any kind, no “Happy Easter”, no nothing. By comparison he has issued glowing, effusive statements of praise for each and every Muslim holiday since he took office. Hasn’t missed one of them. So it is quite interesting that yesterday as believers celebrated the Risen Lord Jesus around the the globe, that the God of Heaven who controls the wind and the weather chose to strike the White House with lightning. And something tells me that there’s more coming…stay tuned.

“A storm rapidly materialized in the Southern sky, and swept from the National Mall toward the White House. Instantly, there seemed to be lightning bolts dropping out of the heavens all around 1600 Pennsylvania Avenue–and the wind kicked up dramatically.

Something tells us more is coming too. Zeus is back with a vengeance, upset heathen America abandoned Greek mythology, and is ready to going to pelt the U.S. with his signature bolts of lightning until it gets back in line with that ol'-time religion.

Or, you know, some weather could have happened. [Now the End Begins]