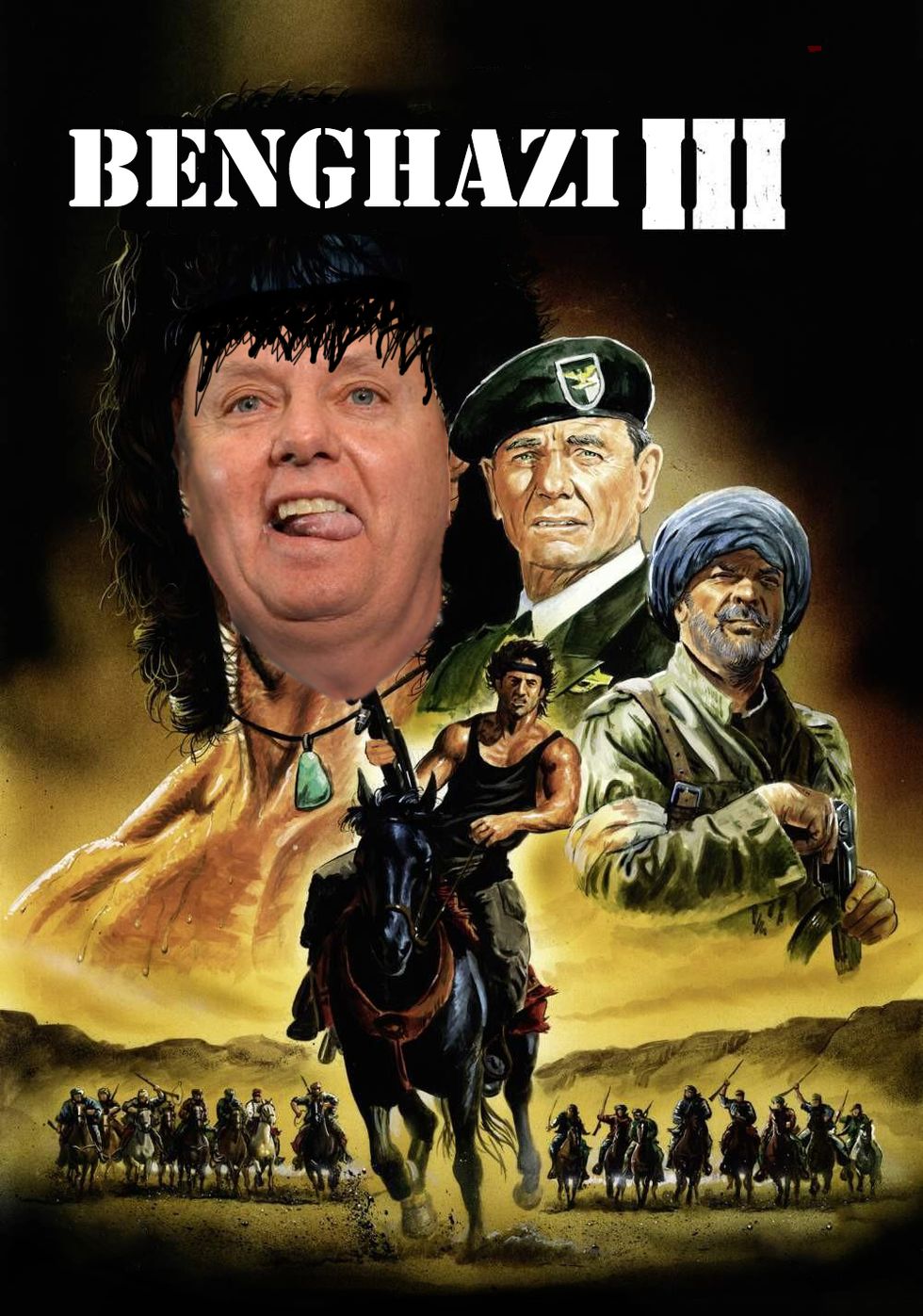 Lindsey Graham is worried, ya'll. He's worried Trump's budget might create the ultimate political clusterfuck. A sin so egregious, so diabolical, and so dangerous that he might actually have to once again borrow Marco Rubio's folding pocket spine and stand up to Donald Trump. Lindsey Graham is afraid Trump might accidentally do a Benghazi.

Among the ten million things in Trump's budget that he wants to do austerity to are the State Department and USAID. If Trump has his way, State will be scrounging couch cushions for loose change just to haul a sleepy Rex Tillerson back and forth to peace summits. This, of course, has Lindsey Graham mildly perturbed, seeing as how he's spent so much time chiding Hillary Clinton over her inability to astral project into Libya and stop a US embassy from being over-run by militant extremists back in 2012. Yesterday, Graham warned that drastic cuts to the State Department could ignite Benghazis all over the world!

“If we implemented this budget, we’d have to retreat from the world and put a lot of people at risk. You have a lot of Benghazis in the making if we actually implemented the State Department cuts.”

A LOT OF BENGHAZIS! As in more than one Benghazi. Nobody liked the first Benghazi, so why green light a trilogy? We could end up knee deep in so many Benghazis that we can't even walk through Not America without stepping in a Benghazi. It's not like Lindsey Graham can team up with Trey Gowdy to take down KKKillary this time, she's still wandering in the woods without her murderous private email server. God only knows what might be in the next couple of Benghazis. Zombies? Aliens? Robo-Gadaffi?

Have we mentioned this budget is terrible? It's actually terrible. No, worse than that.

The proposed budget calls for cutting State Department funding by a third to $37.6 billion. That's money that goes towards protecting embassies with security personnel, as well as providing the logistical support staff necessary to process visas and help Americans overseas. It also means slashing humanitarian aid programs like the Peace Corps that use starry-eyed youths to build schools, bridges, and hospitals for all the godless heathens who don't have access to burnt steaks and ketchup. Without that money there will be fewer doctors to combat HIV/AIDS, infectious disease outbreaks, famine, or other humanitarian crises.

President Barack Obama had to learn the hard way back in the prequels that slashing the State Department budget is bad. He lopped off 11% of funding like an infected hand during the Great Recession because he didn't have a choice. Of course, he brought most the money back later, but lost it again during his war with the Tea Party after The Great Shellacking.

Rex Tillerson Needed A Nap, So We Guess It's War With North Korea!

Trump's projected outlook gets even worse over the next decade as it is expected to cut State Department operations in half. While that might make REXXON's life easier, it's not likely to win any hearts and minds in Foggy Bottom where the slowly churning gears of international diplomacy try to (at the very least) maintain the status quo of balancing the post-Cold War world order. Trump might be worried about leaks now, but things will only get more interesting when career Foreign Service Officers and diplomats start writing public dissents against US policy, or a lack thereof.

Even Defense Secretary "MadDog" "Warrior Monk" Mattis thinks that the use of so-called soft power is far more "cost-effective." Back in 2013, Mattis told the Senate Armed Services Committee that funding the State Department is a better idea than financing another overseas adventure in some hellish sandbox.

“If you don’t fund the State Department fully, then I need to buy more ammunition, ultimately. I think the — it’s a cost-benefit ratio. The more that we put into the State Department’s diplomacy, hopefully, the less we have to put into a military budget as we deal with the outcome of an apparent American withdrawal from the international scene.”

Of course, one way of looking at this budget is that Trump is trying to screw sick and poor people all over the world in the same way he's screwing Americans. At least he won't be accused of favoritism.