Little Marco Rubio Finally Ready To Put Out For Trump 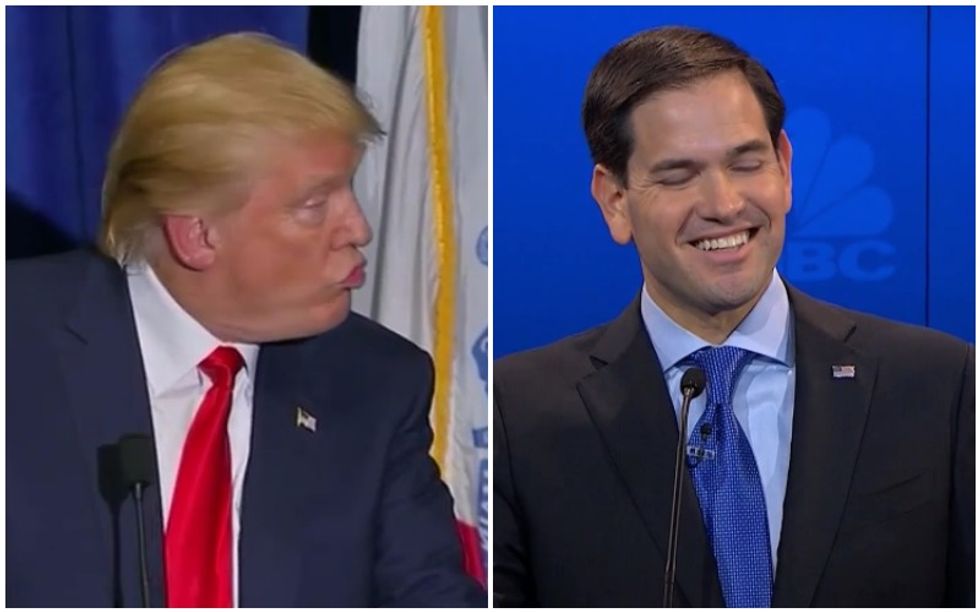 Okay, he doesn't ACTUALLY look happy about it.

That was back in the day, when Rubio was just saying Trump has a small penis, if you get what he is saying.

So ... Trump! And YAY, Little Marco says he's going to the Republican convention, to be there for Donald Trump, his new real dad.

During Thursday’s debate, Rubio said that Trump needed extra makeup to cover up sweat and said Trump wanted a full-length mirror backstage “to make sure his pants weren’t wet.”

"Look, my policy differences with Donald Trump -- I spent 11 months talking about them. So I think they're well understood. ... That said ... I don't want Hillary Clinton to be president."

So he's endorsing Trump then? Somebody sure went from #NeverTrump to #OhMyGodTrumpI'mCumming real fast!

Marco Rubio when he was a little boy:

"[Donald Trump] should be worrying about the lines around his eyes from the horrible spray tan."

Marco Rubio now that he is a big boy:

"If there's something I can do to help [keep Hillary from getting elected] from happening, and it's helpful to the cause, I'd most certainly be honored to be considered for that."

Hooray, Trump! Guess the old expression is true, about how it's not the size of the hands that matter, but how gently they caress Little Marco.

Marco Rubio once upon a time:

"It is my desire at this time that the delegates allocated to me by your rules remain bound to vote for me on at least the first nominating ballot at the national convention."

Marco Rubio happily ever after:

[Rubio] said he'll release the 167 delegates he won during the primary, with victories in Minnesota and Puerto Rico and the District of Columbia.

And even better, Little Marco says that if Donald Trump asks him really nicely, or if Trump puts his foot on Rubio's neck and demands it, he will totally speak at the convention, in support of Trump!

Marco Rubio once was lost ...

And he wore these pants with his gay-ass shoes:

But now he's found, was blind and now he sees, amaaaazing Trump, how sweet the sound, yes, Lord! And now he's like this: