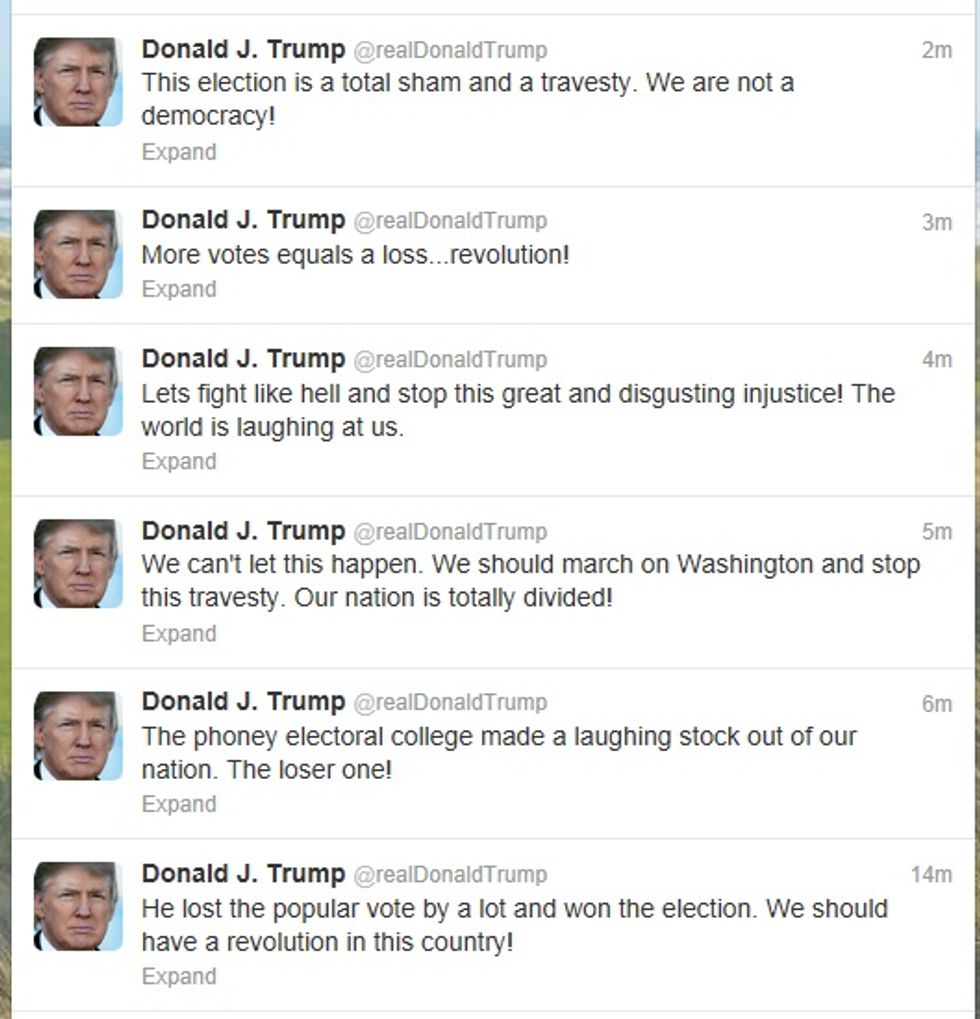 Say, did we mention that we really, REALLY like saying "Senator-Elect Elizabeth Warren"? It's an awfully good phrase, don't you think?

Here we are at the fourth installment of this marathon, and Virginia, Ohio, and Florida are all still in "godknowswhat" status. See our earlier rundowns: Part 1, Part 2, and Part 3. And for godssakes, if you're in Los Angeles, get your butt to the Wonkette Party!

11:15 MSNBC CALLS OHIO AND THE ELECTION FOR OBAMA

Kris. he won HE WON WE CAN ALL GO BACK TO NORMAL !

Kris. OUR LIVES, THEY WILL GO BACK TO WHAT PASSES FOR NORMAL NOW!

Kaia M. bile choking all over the place.

Josh F. FUCK YOU FLORIDA YOU CAN SUCK A DICK

Kaia M. wish i could tell if brit hume had a sad face. :(

Kris. is romney scribblng his concession speech on a napkin right no?

Kaia M. with the graphics and the everything.

Rich A. CNN called it for Barry too

Rich A. John King is humping is superscreen

Josh F. BTW nate silver has not missed a state yet BTW

Rich A. Twitter will be pretty much useless for about 12 hours

Josh F. i just got a one-word text from my dad that said "yes"

11:36: Donald Trump is being statesmanlike, as usual:

And Rachel Maddow on MSNBC notes that Karl Rove is now on Fox, asking the network to rescind its projection of Ohio for Obama...in favor of the candidate that Karl Rove bankrolled.

11:57 Josh F. Brian Williams just referred to "the five ohios inside the one ohio" #zen

Josh F. Barack Obama just emailed my wife to tell her that he's about to speak to the crowd in chicago but wanted to thank her first

Dok Z. Well of course not. Man dates could lead to gay marriages

12:15 In other races! Same-sex marriage looks like a done deal in MD, leading in ME and WA Wingnut heads to commence essplodin' shortly. HOW COULD THEY LOSE WHEN THEY ARE SO SINCERE? Also, say goodbye to the American Patriarchy Association's talking point that "every time it's gone before the voter's dhey marriage been defeated."

12:20: Josh F. Brian Williams just said Donald Trump has "driven well past the last exit to relevance" ... then he read all of Trump's tweets extremely sarcastically and said "So there you have that. That happened."

12:30 Kaia and Kristina are calling it a night and departing the ChatCave! Kaia's final note: "Fingers crossed i don't wake up to hear john kerry actually did win."

Rich A. i'm sorry all my hopes and dreams are on this race. I hate Allen West to the point that I would rather not get to write about him anymore than have him in charge of shit

Rich A. I think I peed a little