Liveblogging Cindy McCain And The Talking Motion Picture About John S. McCain's FIVE AND A HALF YEARS In Vietnamese Maverick Cauldron 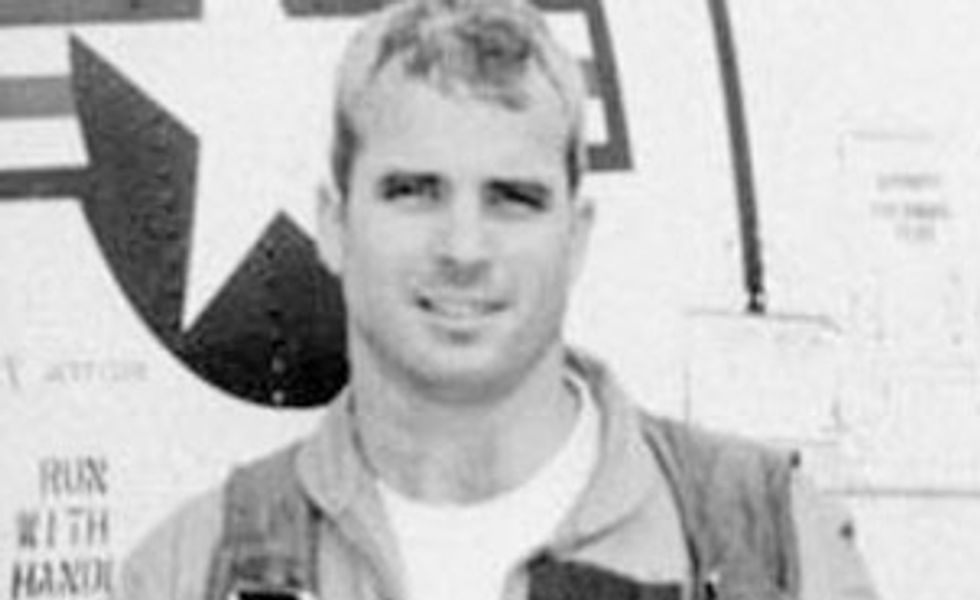 John McCain was a prisoner of war once, which automatically qualified him for every job ever invented, including haberdasher, whale scientist, and sex toy engineer. Let's see how many people in this biographical film say, "That's offensive!" when they are asked an actual question about John McCain.

8:39 PM -- Let's see...the government needs to get out of people's way when hurricanes strike, and Republicans are haunted by the dead ghost-hands of Abraham Lincoln.

8:41 PM -- Why no podium for poor Cindy tonight? Also the obligatory "Jesus Christ she sounds like she is stoned/high." She is trying to put us all to sleep, and it's working. A double espresso is really no match for this soothing Sally Struthers monotone.

8:43 PM -- It's a little bizarre to hear all this talk about perils and the awfulness of the world when it sounds like a Nyquil commercial. "How about that Governor Sarah Palin?" she asks, and the audience finally perks up. She sounds momentarily excited as she lists Palin's many qualifications for Veep, including the bit about the moose.

8:47 PM -- Cindy is going to fall asleep on the stage. Can you see those brown boxes in front of her, on the teevee? There are two brown boxes there, and she is going to curl up between them and put her head on a pile of diamonds and go to sleep.

8:48 PM -- "My father was a true Western gentleman, and that's why I married a short creep from Virginia who likes to tell rape jokes." God, this is boring. It must be very strange for her to read this speech, all about her life, which she doesn't remember at all. It's a journey of discovery for everyone! Layne points out that Cindy brought home two orphans but only adopted one. What happened to the other one? Killed and eaten, for sustenance?

8:52 PM -- "She was made to suffer unimaginable horrors." Loudest applause of the speech. God, these people are monsters. Ghouls and monsters.

8:53 PM -- Oh hey what is all that crap on her left shoulder? Faux army medals? This woman is amazing. You could put up anything on that teleprompter -- Mein Kampf, dirty limericks, the phone book, the Kama Sutra, instructions for a spleenectomy -- and it would all be read in that kind of dazed, heroin-fog tone. GOD BLESS YOU CINDY McCAIN, you wonderful mass of hair extensions and sedatives.

9:04 PM -- Lights down. Did you know John McCain was a POW? He was also a husband, twice! Oh they are making this funny, calling him a mama's boy and a vile, crass son of a bitch.

9:06 PM -- Remember when John Kerry did the whole I WAS IN VIETNAM DAMMIT thing and he was just mocked and ridiculed and humiliated? Yeah, weird. Footage of John McCain smoking in bed like a badass. Now an old pal reads from one of those books Mark Salter wrote in that faux Hemingway voice.

9:08 PM -- Yay John's mom! It is impossible to think or write anything bad about Roberta McCain. She is just great.

9:09 PM -- "John McCain has seen too much to think petty." A ha ha ha ha ha. Tell it to all the journalists he's so mad at now that he can't give them dry rubs at his Sedona ranch in exchange for them not mentioning all his affairs and Keating Five problems. Oh hey who is narrating this thing? Charlie Rangel? "What a life. What a family."

9:11 PM -- More black people are present in this video than in this entire convention hall.