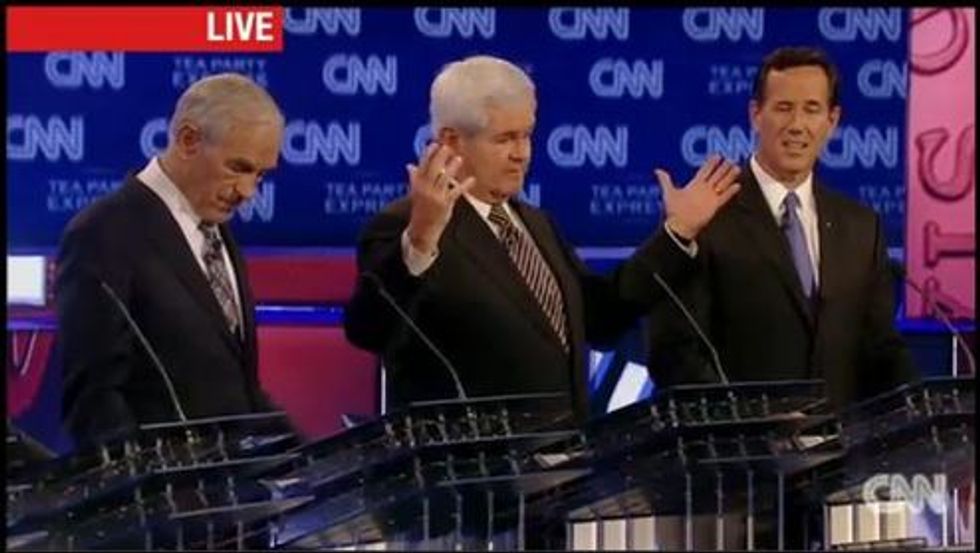 CNN's spambots have been trolling our inbox since approximately forever with their creepy propaganda for this ludicrously billed "First Ever Tea Party Republican Debate" war film starring rusty news studio camera tripod Wolf Blitzer, an event which is neither the first "Tea Party debate" nor even the first Republican debate in the last week. We VERY NEARLY just plagiarized your Wonkette's feverish GOP debate liveblogging from last week, more or less in the name of human dignity, instead of watching Rick Perry and his squad of forgettable goons eat each other to death in, where, this time? Oh, right, Florida. But, eh, here we are, for freedom, instead of "reading a book" like all the other Monday night socialists are doing. (Hahahahaha, or not, books are illegal.) Here is the criminally dysfunctional CNN livestream for those of you following at home!

7:56 - Oh look, we have accidentally tuned into the 34th season of American Idol. Some guy with a weird head mic is trying to tell the audience they are not a pit full of slobbery, ugly fools. Good joke!

7:59 - Wolf Blitzer has taken the stage. "I have been moderating presidential debates since before FDR got polio. Literally, just thousands of them."

8:02 - CNN airs a nice aerial "context shot" of the Tampa Bay strip mall wasteland where the debate is taking place. The packs of unemployed hobos teeming around the entrance have been Photoshopped out.

8:05 - The candidates are all out on stage! Who will win tonight's round of "special ed Jeopardy," Alex? We vote for the machines. And now some lady will sing the "Star Spangled Banner" to scare away the demons of communism. White people across the auditorium swoon with patriotic orgasms.

8:10 - Wolf Blitzer lays out his drinking game rules: "responses to substantive policy questions will be limited to a single incoherent sentence riddled with mindless talking points, and anyone who uses 'TEE PARDY' in their sentence gets a free spanking."

8:15 - WOLF BLITZER out of the gate with the number one question for this entire debate: "Rick Perry, do you still believe that Social Security is a syphilis-ridden vampire invented by Stalin?"  RICK PERRY: WHIFF. Why are there still old people in America? That is un-American. GREAT. THIS DEBATE IS NOW OVER. GO BACK TO BED.

8:18 - This debate is copy-pasting itself. Mitt Romney is fighting with Rick Perry about scaring seniors, exactly, verbatim, from the last "first five minutes of a GOP debate."

8:22 - Jon Huntsman will choose the corpse of Kurt Cobain as his running mate if nominated.

8:24 - Based on CNN's audience cutaway shots thus far, we report that the audience is white and old and wearing a lot of flag t-shirts. THAT IS ALL.

8:28 - Rick Santorum bizarrely declares that Bush's Medicare Part D prescription drug program is "40% under budget," which is on the order of saying, "the Iraq War cost negative one hundred dollars." Aaaaand Ron Paul has fallen asleep.

8:32 - Michele Bachmann is tired of taking everyone's money and then complaining about it.

8:37 - Rick Perry has done the math on jobs, and half of zero is zero. This is what he learned, in college!

8:40 - Newt Gingrich is putting everyone in his immediate vicinity to sleep:

8:44 - RICK PERRY JUST MANHANDLED MITTENS. Wolf Blitzer made Rick Perry do this to Mittens, which means that he is Rick Perry's pimp.

8:47 - Ron Paul with the fact-check smackdown! "Rick Perry is a pretty terrible fraud if you look at the evidence, a tenth of his job creation were government jobs." And then something about how the Pope is jealous of America's War Vatican in Baghdad. The Internet applauds.

8:50 - Herman Cain's experiences eating at restaurants are his main qualification for understanding "the worker." He has seen them there, working! He is also related to some people who have been "workers." Herman Cain, he is so relatable!

8:55 - Rick Santorum worked on his one-liners during the commercial break! "I just wanted to add, many people say Obama's economy is a disaster. My feeling is that it would have to show a dramatic improvement to be called a disaster." ZING!

9:02 - Newt Gingrich dodges a question about tax loopholes for oil companies by reminding America that General Electric does not pay any taxes. We like your math, Newt!

9:08 - Michele Bachmann is against government-mandated vaccinations for children. Measles and Rubella should still be part of the American childhood experience of freedom.

9:11 - OH LOOK IT IS THE 9/11 time of night. RICK PERRY IS NOT A CHEAP WHORE WHO CAN BE BOUGHT FOR ONLY FIVE THOUSAND DOLLARS, MICHELE BACHMANN. Drug companies pay at least a million dollars to Rick Perry for each anti-cervical cancer vaccine in Texas. God, Michele Bachmann is such a cheap floozy.

9:17 - Rick Perry and Mitt Romney are having a full-on makeout, and they refuse to insult each other. This is how running mates flirt, YOU HEARD IT HERE FIRST.

9:19 - Wolf Blitzer: "But Doctor Ron Paul, are you saying we should let people without health insurance die?" AUDIENCE WHOOPING. Seriously, they applauded.

9:21 - Michele Bachmann is mostly being ignored, so she is trying to get the rest of her debate appearance into one long-winded speech about the importance of repealing health care reforms to provide help for millions of sick people without jobs. Michele Bachmann/ Death 2012! The Tea Party zombies applaud, because they love death camps.

9:28 - Rick Santorum says that Rick Perry has been trying to attract the "illegal vote, er, the Latino vote with in-state tuition." Because Latinos = illegal, see?

9:31 - The audience boos Rick Perry for suggesting that immigrant children should not be flogged with Ben Franklin's diapers for the crime of being minor children when they were brought to the United States. Yeah, BOO.

9:33 - Jon Huntsman is still here, and he just called Rick Perry "treasonous" for implying that the border cannot be secured. Jon Huntsman's friends from China know about "building walls," and they will build a real wall to keep those Mexicans trapped in their own country.

9:42 - Rick Santorum is ranting about the gay jihad again. Ron Paul gets a huge BOOOOO from the audience for trying to explain to the audience of dimwitted human amoeba that Muslims perhaps do not care for America's constant bombing.

9:46 - Wolf Blitzer: "What would these candidates add to the White House if they were to move in?" Ooooh, that is a fun one! Goblets made from the skulls of welfare recipients? Lampshades made from the skins of unionized teachers? Rick Santorum: a giant wall of jars full of aborted fetuses.

9:50 - Michele Bachmann's first act as President will be to steal the Constitution from the National Archives to replace the missing toilet paper rolls in all the White House bedrooms.

9:55 - POOF! And the clock has struck "almost ten," which means it is witching hour, i.e. "we are passing out from trying to absorb this nonsense," which is coincidentally also the end of the debate. GOOD NIGHT FOREVER, LEPERS.