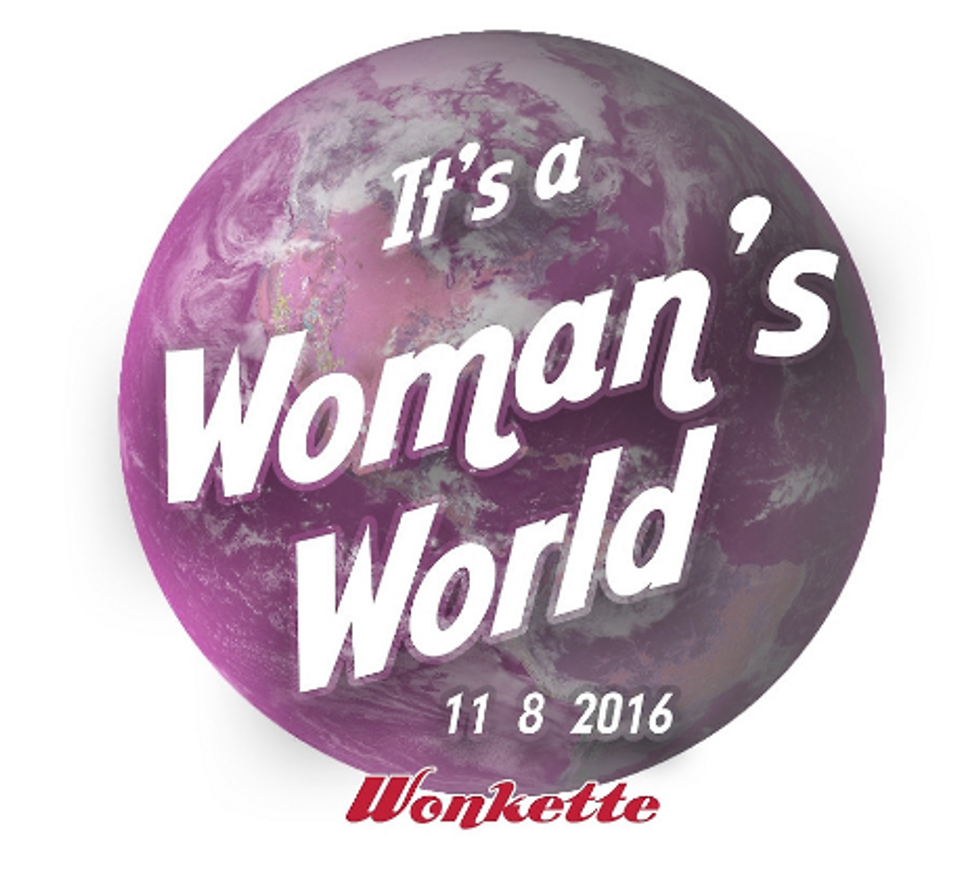 Here we go, ya WANKETTE WANKERS! It's the night we have all been waiting for! The polls are about to start closing and we will find out whether Hillary Clinton has broken the glass ceiling with her vagina, or whether America has decided that our little 240-year experiment as a free country was LOL, and would rather surrender to Mother Russia. Not that the stakes are high or anything!

So here is your livebloogity thing, which will last about an hour, and then you fuckers are on your own. HAHA WE KID, we are going to be on internets with you until shit is over. WE PROMISE. So!

ALSO TOO! Bernie's Vermont for Hillz!

We can also too report that, via MSNBC, Rand Paul (R) and Pat Leahy (D) are keeping their Senate seats. So ... news!

Oh, and just now according to MSNBC, 40 PERCENT of Georgia's voters are nonwhite. Yowza!

7:15: Wanna read a funny while we wait for #news? Turns out a buncha folks hacked Donald Trump's website today to make it say he's conceding and stuff. READ IT!

7:30: Polls just closed in Ohio, North Carolina and West Virginia, and Hillz WINNED THEM ALL! Just fooling, Trump won West Virginia and everything else is too close or too early to call.

7:32: Oh, and Rob Portman The Republican kept his Senate seat in Ohio.

7:48: Hey, you guys, Doktor Zoom has made the wild and crazy prediction that Trump will win his home state of Idaho. #WonketteProjections

7:58: MSNBC has called South Carolina for Trump. Not a big surprise? More polls closing in RIGHT NOW ALSO TOO.

8:00: Hillz takes Illinois and New Jersey and Massachusetts and Maryland and Connecticut and Rhode Island and Delaware and DC, according to MSNBC!

Tennessee and Alabama and Oklahoma have been called for Jill Stein, HAHAHAHAHAHA WE JOKE YOU! They are Trump states.

None of this is unexpected.

8:05: TAMMY DUCKWORTH WILL BE A NEW SENATOR FROM ILLINOIS! YAY! WE ARE FOR EXCITED! She is a badass and Mark Kirk effing sucks.

8:08: Little Marco Rubio #winned his Senate seat back, but Dems kind of abandoned that Florida race for nobody knows why, so.

8:15: Bernie Sanders replies to The Onion:

8:26: Everybody is reporting that lame, fake Democrat Evan Bayh -- who made Obama's life a living hell because the "public option" was "socialist," has officially shit the bed in Indiana, so ... 'k.

8:31: Arkansas polls have closed, and surprise, they did not vote for that dastardly lady who wouldn't take her husband's last name "Hillary Rodham."

8:33: MSNBC projecting that GOP holds on to the House, so yayayayayay, Jason Chaffetz gets to keep investigating Email-Ghazi!

Also too, if you are looking at Virginia and getting scared, note that WAY LOTS of Fairfax County is still out.

8:40: Aw, y'all are freaking out because Virginia and Florida, do not worry! All will be well! Here, have Little Girl Hillary, back in her BUNNY-AVENGIN' days!

8:45: Florida is handily passing its medical marijuana ballot initiative. That's one way to deal with six more years of Rubio. Plus those bath salts get so spendy!

8:50: Ooooh, Donald Trump is ahead by six points nationally at the moment, per MSNBC. I bet you like that, you are all such masochists. OH WAAAH THE WORLD IS GOING TO END SPANK ME SPANK ME CRY CRY SNURF.

No. We will not spank you. You don't deserve it, you little worms!

You know what you DO deserve? This mariachi band playing outside Trump Tower!

9:12: OK, Wonkette can safely forecast that this is going to be a long goddamn night. Goddammit. GRRRRRRRR.

We know we promised you no more Jill Stein stories, but we think tomorrow is going to call for an extra-special Two-Minute Hate.

9:40: And the New York Times says the race is now 50-50. HAHAHAHAHAHAHAHA oh life and your rich tapestry!

9:50: Here, look at this beautiful Somali-American woman, Ilhan Omar, LOOK AT HER! She is about to be a new Congresswoman or something, I don't even know, I am just grasping at straws right now to keep you from killing yourself and your family.

Oh, she'll be a "state representative." BETTER THAN NOTHING, LOOK AT HER.

10:00: OK, Virginia non-shitball counties starting to come in. We may still get to sell you the beyootiful Hillary 45 t-shirts we made for you after all! (WE ARE NOT PUTTING THEM UP YET, BECAUSE HUBRIS AND ICHARUS AND ALL OF THE FABLES. But they are soooooo pretty, you want to buy them real bad.) And THAT IS WHAT MATTERS!

Also, the continuing existence of life on the planet.

10:01: OK, things are still very stressful, but some more polls closed and some more places are too close to call, so go ahead and still be stressed.

10:07: New York Times election tracker, we love you with the passion of one thousand flaming truck nutz, but also you are making us hallucinate and lose our lunch also too:

10:21: OK fine, you can hit your OH SHIT button, because NBC just called Ohio for Trump. Let's do our breathing exercises, OK? Race you to the Canadian border?

10:27: NBC calls Virginia for Hillz! Fox called it a little bit earlier, but they are being weird tonight and fuck them.

OK, so let's #thinker this. We know now that Hillz has Virginia and New Mexico. It's looking good in Colorado. And we already know the Mexican Spanishes did good things for us in the sovereign state of Las Vegas.

Now, notice that in this the scenario above, she loses Florida and wins North Carolina. But you can take away North Carolina and she still wins. It would be a squeaker! But Donald Trump still would not be president. So ...

Thanks, "BMW" in the comments!

10:48: Dear Washington Post: Is this Jennifer Rubin, Jennifer Granholm, or Fat Ann Coulter? It is not Hillary Clinton.

11:00: AND HERE COMES THE WEST COAST! Hillary Clinton wins CALIFORNIA, WASHINGTON, OREGON, AND HAWAII. This is all expected, but we need #nicenews right now.

11:29: Paul Ryan is on our TV being excited about winning re-election and how it could be a "really good night for America" with Republicans having all three branches of government and OW OW OW we just broke our hand punching the television in the face. Also, global markets are still going apeshit.

11:30: MSNBC calls Florida for Trump. *DRINK ALL THE REST OF YOUR BOOZE." Oh and Trump got Utah. Sorry, Mormonpants McSpoiler dude, and also sorry, America!

So it's looking bad! Did Evan mention to you that it is looking bad? (Evan was doing the livebloog the last long while. I have been doing ... other things.) Now Rudy Giuliani is being charming and happy on the television. Nothing worse than a delighted death-eater.

NBC calls Georgia for Trump. Remember when we thought Hillary might win it? Oh, we were so young then.

12:08: Nothing has been called, but we want to say we love you very much. Somehow, we will be OK.

12:20: Not good news! Trump is officially ahead in Pennsylvania. We told you we hated most of that state when we traveled across it on our way to the Democratic Convention. Now we know why it repelled us so.

12:25: Associated Press calls Nevada for Hillary! That is a thing!

12:40: Remember Obamacare? That was awesome.

12:45: So we imagine the Hillary campaign is thinking about recounts right now. We are for them! They should do that! Nods sagely!

12:55: We've all been rendered speechless. Oh, there are words on a wordpress draft that is plenty spitty, but we're waiting to push the button until all hope is lost.

Mind if we just sit here silently with you a while?

1:20Oh yay these guys are feeling their oats tonight, BE CAREFUL IF YOU'RE NEAR TRUMP TOWER, DON'T GET RAPED!

Trump party has been exactly like legacy night at a fraternity. pic.twitter.com/XxhOGJGS4z

1:40: AP calls Pennsylvania for Trump! Are there even any states left? No idea! Maybe Guam!

2:00 Hillary wins three out of four of Maine's electoral votes!

Podesta sends people home from the Hillary party under Javits Hall's great glass ceiling. He's cheery! Hillary appreciates us all! They are proud of us!

He is good at giving this speech right now. Hillary is probably a gibbering mess. We should send her a nice love note tomorrow.

2:45 And we're waiting for Trump to speak at Trump Tower -- Hillary has called him, though no one knows what she said -- and Chris Matthews says what gives him at least a little bit of calm is our Constitution. UM. MAYBE YOU SHOULDN'T HAVE ACTED LIKE SHE WAS THE DEVIL FOR THE PAST 40 YEARS.

HERE, I HAVE SOME THOUGHTS. I don't know what that music was besides "emperor music," but it was fucking gross, and fuck being sad I AM MAD ABOUT EVERY FUCKING THING.

Oh whew, now that Trump is President Universe, it is time to come together! OKAY!

Aw, you guys, he is reaching out to us, maybe he will not LOCK US UP now as enemies of the State! Just Hillary, but she'll be fine, white lady gulags are awesome.

Donald Trump is promising to "get along with all other nations" and double the economy's growth, and everybody gets a pony, but just no Obamacare, because LOL come on, BLACK GUY!

Donald Trump gives a shout-out to his late brother, whose grandbaby had cerebral palsy when Trump cut off his medical care because he didn't like how the baby's parents had challenged getting cut out of old Fred Trump's will.

FUCK YOU YOU AMORAL AND IMMORAL PIECE OF FILTH.

And now they're playing "You Can't Always Get What You Want."

We will see you in the morning, with a needle in our arm and a drink in our gullet, and we will get through this UTTER FUCKERY THE UNIVERSE HAS SEEN FIT TO HURL AT US.