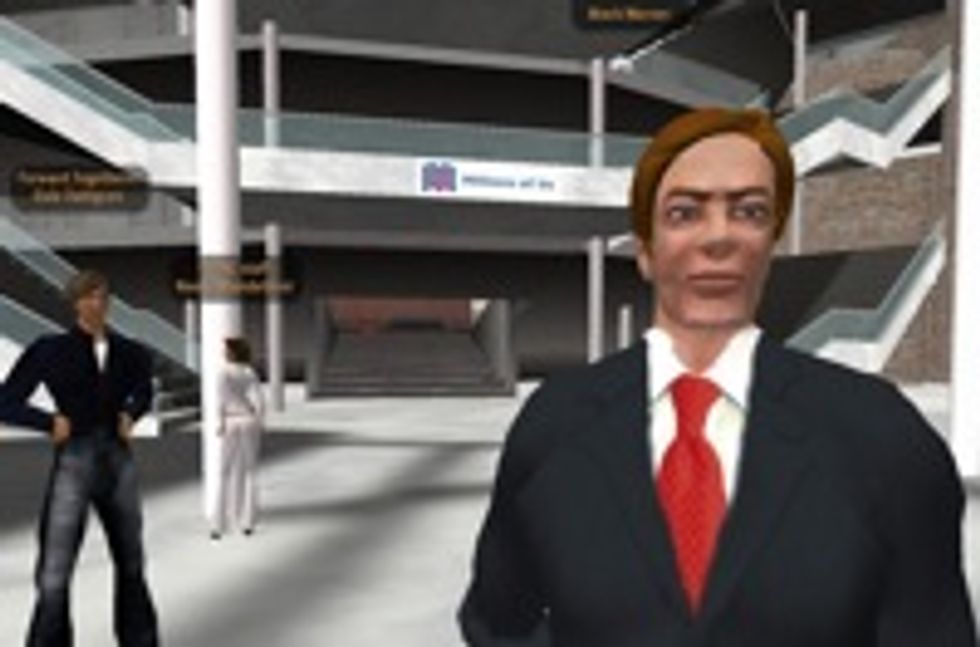 Here is a picture of handsome Mark Warner in the alternate reality computer game for dorks, Second Life. What amazing things will Mark Warner have to say tonight? Perhaps, "Please do not confuse me with the fellow who was married to Liz Taylor." Or, "I am a human who has no lower jaw, only teeth." But first, some other people... like Lilly Ledbetter from Alabama.

9:27 PM -- "Ten percent of the people in this audience are lobbyists," chortles somebody sitting behind us. We are seated next to a delightful union president who keeps passing us signs to hold up. NEW ENERGY FOR AMERICA! He is a garrulous gentleman who is unnerving Newell with personal questions such as, "Do you enjoy living in D.C.?"

9:29 PM -- RENEW AMERICA'S PROMISE! A pile of signs is wedged between our feet and the railing.

9:32 PM -- Lilly Ledbetter is fantastic. Do you remember this appalling Supreme Court case, where the gal made much less money than her male coworkers for a million years, and the Supreme Court was like, "Meh, we can't do much about that." When this came on the NPR and they were talking about this miserable injustice, it was very sad. That is the story of Lilly Ledbetter.

9:42 PM -- Thus far the only original phrases that we have heard escape the lips of any speaker have come from Dennis Kucinich and our new girlfriend, Lilly Ledbetter. This guy is just more, "change we need," blah blah blah.

9:43 PM -- "I have a unique perspective on this race." Yes, because Mark Warner was one of a half-dozen Americans to be very publically passed over for the vice presidential nomination.

9:44 PM -- This is why technocrats must not be elected to public office: they think that telling old stories about car phones is really fun and interesting. If God were just, He would send down a meteor to the gentleman sitting behind us shouting into his cell phone about where "Drew" went. DREW ISN'T HERE ANYMORE.

9:46 PM -- Ha ha, we are not going to be able to write about any of this crap because of these fucking douchewads behind us. Question: why go to all the bother of attending these events if you're just going to sit and yap about where your pals went? Back to Warner: "the character and the resolve of the American people." Everybody claps.

9:48 PM -- This is such a wonderfully useless lie that people love to whip out in speeches: that Americans, after September 11, would have gladly made tremendous sacrifices for their country, but they were never asked. Americans may be patriotic, but they are also dreadfully lazy.