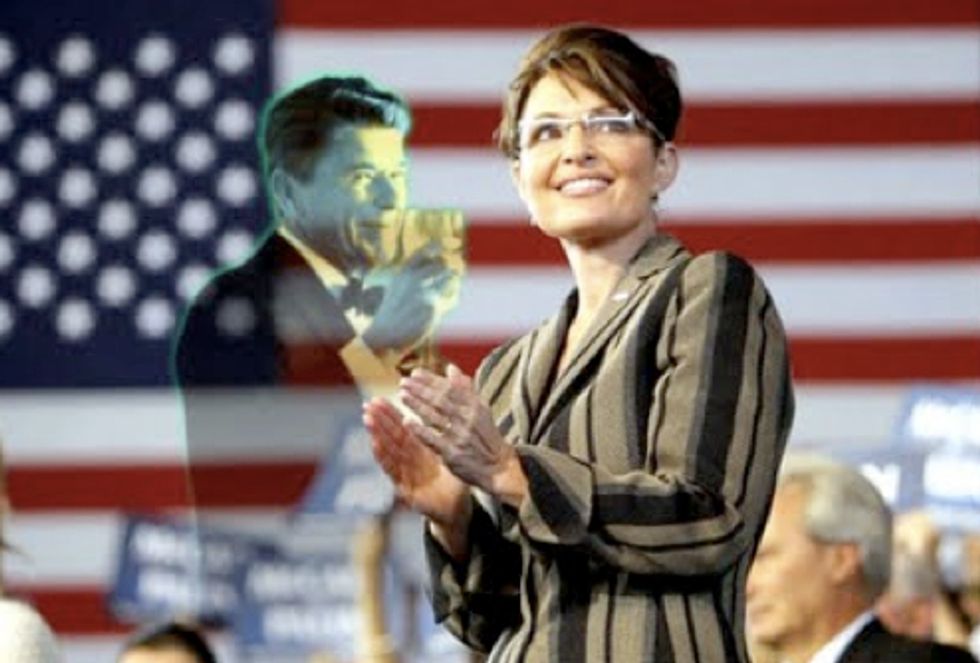 Anyone else feel sick to your stomach? We're going to get this over with, and then blow up the blog. [UPDATE: It's over! The liveblog is completely incoherent, as usual. Pareene also liveblogged it atGawker. We both quoted Andrew Sullivan at 4:39!]

3:56 -- Oh wait that is just a nice lady on a soap opera doing the talking. Or is that Sarah Palin on Oprah? No one knows.

3:59 -- Hmm. It appears as though a black lady is introducing Sarah Palin. This must be the Oprah show! Oh god it is happening so fast!

4:00 -- Oprah immediately says, when I didn't invite you on my terrible show before the election, because I hated you, really hated you, it was not a snub.

4:01 -- Sarah Palin pretends to not give a shit. Oh whaddever, Oprah, it's a free market! Free market teevee show! (She probably shits all over Oprah in her book.)

4:02 -- MOVING ON: WHAT WAS IT LIKE SARAH WHEN YOU GOT THE PHONE CALL, to hold John McCain's catheter on the road for a few months? What did it mean? Does John McCain smell, because he looks like he smells.

4:03 -- Oh well, thank you for asking, Lisa Leslie or whoever you are. It was nuts! They started looking at all of my tax returns! It was so intrusive! But I thought that was the end of it. Then: Bristol!

4:05 -- Bristol and I were not happy that she was having a baby, since she was like four years old. We were not happy to be grandparents, in that sense, but we were, because God had blessed her womb? You know? But anyway the press release screwed all of this up! It did not say what I, Sarah, really meant!

4:06 -- Bristol was surprised and embarrassed and in tears when her pregnancy went public. We had assumed the media would just ignore this. Don't even get me started about the media! (Please, get me started.)

4:07 -- She underestimated how interesting this would be to the "haters." "Haters" = "all humans," we are expected to infer.

4:08 -- BARACK OBAMA'S CHILDREN GOT LEFT ALONE! WHY WEREN'T MINE. WHY WEREN'T MY MALIAS AND SASHA'S LEFT ALONE. Probably because he didn't wear them as a cape every time he appeared in public? Or maybe because he said other things besides "MY KIDS MY KIDS MY KIDS" when explaining his qualifications for president? Meh, let's just blame Andrew Sullivan.

4:13 -- Oprah: I was just chillin' with my best friend Barack Obama the morning after his convention, which was awesome, and then I saw McCain announcing you as the pick on television and was like, Who the dickens is this lady? Sarah, do you have anything to say about this awkward thing?

4:14 -- Oh now Oprah is calling out page numbers. Page 231! Sarah what was it like when you wore those fancy clothes that cost billions and everyone hated you for that?

4:15 -- Sarah: NO ONE ASKED ANY MEN ABOUT THEIR CLOTHES. (Except they did, shortly after the story broke.) I sympathize with Hillary Clinton, for having to go through these sexist motions! Hillary Clinton is great! All ladies should vote for me in 2012! Wait, what was the topic... Hi Oprah!

4:18 -- HOORAY COMMERCIAL! This will end in seven seconds, get as much porn-browsing in as you can!!

4:21 -- There is a preview of some movie with blue people flying around on pterodactyls and firing laser guns. It is James Cameron's adaptation of Going Rogue, insiders tell us.

4:22 -- Oprah: remember that Katie Couric interview, when you shat out of your mouth every night for two weeks? That was hilarious, right?

4:23 -- Half a second of candor! Sarah says yeah, I understand why people thought I was retarded, then. STILL, Katie Couric is a liberal sleazebag whore with a partisan elitist agenda and she lies and is depressed and is filthy acid-washed trash who no one likes, BUT YEAH, OH WELL.

4:24 -- Oprah: Obviously you've read newspapers and magazines, why didn't you name any? Sarah: I love all of those things, yes, and I could have named every newspaper and magazine for the last 300 years, but I felt condescended to, so fuck her question right? I don't like to play the victim card, but I was totally the victim here, and the entire concept of "news media" is flawed because I flubbed this question.

4:26 -- Some women "consider" having abortions. Sarah Palin "understands" them.

4:29 -- When we first heard about the baby (having Down Syndrome, we think she means), Todd was super excited, but I just yelled at God for a while. And then Todd said "stop it, it's cool," and I Obeyed him. Hooray!

4:31 -- COMMERCIAL. We are not learning much during this interview, since all of the hilarious book excerpts (ERRONEOUS LIES) have already been leaked. Oh shit are they seriously making a SEQUEL to Alvin and the Chipmunks? IT'S CALLED "THE SQUEAKUEL"!? Daytime television is *terrifying.*

4:32 -- LEVI! Oh there, she said it, that she read about "Ricky Hollywood" on a contrarian New York news-aggregating British mogul's vanity project.

4:36 -- Bristol's in college! She also has this side gig where she tells every American teenager not to fuck.

LEVI IS THE KING OF PENISES, DO NOT CONTRADICTETH HIM!

4:41 -- Oh god, we're now "on remote" with Sarah in Alaska, as she drives around. There she is at the gym, doing crunches! "Sweat is my sanity," she says. Wonder what's in that sweat?

4:42 -- Halloween costumes! This is the difficult portion of the interview, for Sarah. Piper is a motorcyclist! Sarah is driving her from house to house to trick-or-treat! IS THERE ANY REASON THIS WOMAN SHOULD NOT BE PRESIDENT?

4:45 -- Commercial! After the break, Willow hits the stage and performs the ol' flapping dickie routine. Piper lights an elephant on fire!

4:46 -- Oprah: Were you disappointed John McCain didn't let you speak on election night when it wasn't your place at all to speak because of historical precedent and basic etiquette?

4:48 -- Oprah: How would you be able to manage being vice president when you have five kids? OPRAH IS SEXIST.

4:49 -- Ha ha, we think she says that... some things need to be put on the "back burner" sometimes -- these things being her five children. Burn, kiddies! Why don't both of these ladies cut the shit and just admit that the vice president has a full 24 hours of free time per day? (Or if you're Joe Biden, 25 hours -- hubba hubba!)

4:51 -- It's much easier for me to "fight for what is right" when I'm unemployed and don't have to adhere to the basic ethical standards of any organization.

4:53 -- Sarah: Oh, 2012. Trig will be in kindergarten then! What even is "the presidency"? I've never thought of that, Oprah. I am concentrating on fueling up some racism in 2010. And then Trig will go to kindergarten!

4:55 -- You guys have to see this fucking Alvin and the Chipmunks "SQUEAKQUEL" commercial... it's nuts.

4:56 -- Oh, Barbara Walters is interviewing her tomorrow morning on ABC. Have fun, Juli!

4:57 -- Sarah: HAHAHAHAHA THAT IS THE FUNNIEST COMMENT I HAVE EVER HEARD OPRAH AHAHHAHA, but maybe. I love what you do for women, Oprah!