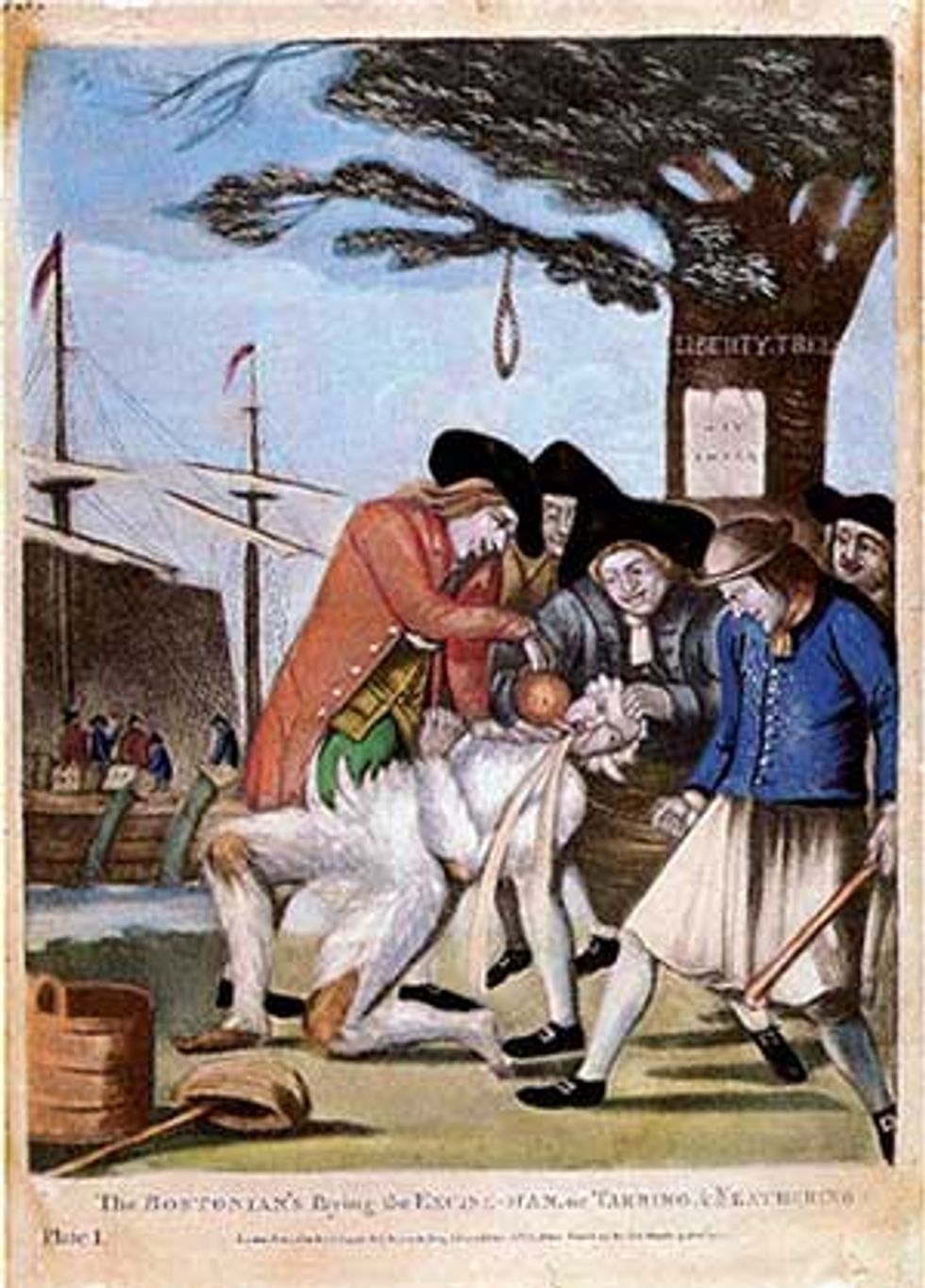 Anybody else feeling some rage fatigue here? Some congressional grilling fatigue? Anyone else just want to rent out the world's biggest Dumpster and put in it every financial goon whose name has made the front page of theNew York Times in the past 24 months? Well, that's what the 'Tussin is for. A few squirts and you will be back riding the old Horse of Indignation once again. Join us on a journey through the dark heart of a London division of an American company that made all the money in the world disappear.

1:51 PM -- Well, here we are, at some point in this dude's testimony, who knows. Maybe he has been on for hours. But he looks okay for a guy who is getting anally invaded, with words, by "members" of Congress.

1:53 PM -- The Pink Ladies are relinquishing their signs that say ... something about the war, right? NOT RELEVANT.

1:54 PM -- Now we will go back in time, and collect some remarks from our editor Ken Layne who caught the beginning of this public flogging.

1:40 PM -- Here is Liddy's long, contrite statement. Basically, he had to pay these scumbags $165 million in "bonuses," otherwise they would not stay at the company and oversee the peaceful destruction of this particular AIG unit.

1:42 PM -- You know, the advanced-financial-fuckery division that basically caused the Great Recession.

1:42 PM -- Because with the entire financial sector in ruins and hundreds of thousands of former high-finance workers unemployed, it is very important to pay huge "retention bonuses" to these AIG coke addicts, to prevent them from moving to other, off-world finance companies.

1:45 PM -- The honorable chairman would like Libby to know that this decision, to pay these bonuses "in the dark of night" on March 15, will sort of hurt future efforts to get a majority in Congress to approve any more TARP-esque bailout money, so the world is going to end.

1:55 PM -- Back to our regularly scheduled programming, which is Barney Frank suggesting lawsuits and things.

1:58 PM -- Liddy will give up the names of the people who didn't give back bonuses if he can be assured they'll remain confidential. Frank says "Sorry bro can't guarantee that," which is basically saying to the people who got the bonuses, "Give the money back or your names will be publicized, and you probably don't want that."

2:00 PM -- Threats of piano wire etc. Ha, these people would not last a day as a common blogger.

2:01 PM -- Barney Frank is unpersuaded by the safety argument, is the point.

2:02 PM -- Well, to his credit, this dude does not appear completely rattled. Guess that's why he makes the big bucks!

2:09 PM -- "Parachuted in on a ship that hit the rocks," says Gary Ackerman, from the mixed metaphors area of New York State. Who is this weasel talking to Ed Liddy about what a nice man he is? WE WANT BLOOD.

2:11 PM -- Ackerman seems to be wanting the money back from AIG's general fund. No, the munnies must be extracted from the rectums of the very motherfuckers who ran AIGFP. Why does this Ackerman not seem to get that?

2:14 PM -- Hmm, good question! How involved has the Fed been involved in all this biz since the fall? Liddy cites a "cadre" of people from Morgan Stanley and Ernst & Young. Basically, he says that the Federal Reserve has been very involved, so this is all their fault as well. Ha ha ha, AIG has been in constant communication with the NY Federal Reserve and Treasury and even members of Congress, sharing information and consulting on big decisions and all sorts of stuff! EVERYONE IS GUILTY OF EVERYTHING.

2:19 PM -- Dude wants a list of who was at those meetings and what was discussed.

2:23 PM -- If the Federal Reserve Board knew about these bonuses, says this tax guy, "then they should be called to account." This current questioner guy sounds like a radio show host. He has that kind of voice. Brad Sherman, of California. Remember earlier in the day, when the camera panned to Michele Bachmann and her attractive assistant, and it just lingered there for a while? There's nobody pretty to look at anymore, in this hearing.

2:27 PM -- AIG will get stuck with first-year public defenders instead of $1000-an-hour criminal laywers, or something, if they get accused of criminal wrongdoing.

2:28 PM -- In the absence of attractive faces or scintillating expressions of outrage, this liveblog is officially adjourned, good night.