Liveblogging the Dismal State of Our Union, Part I 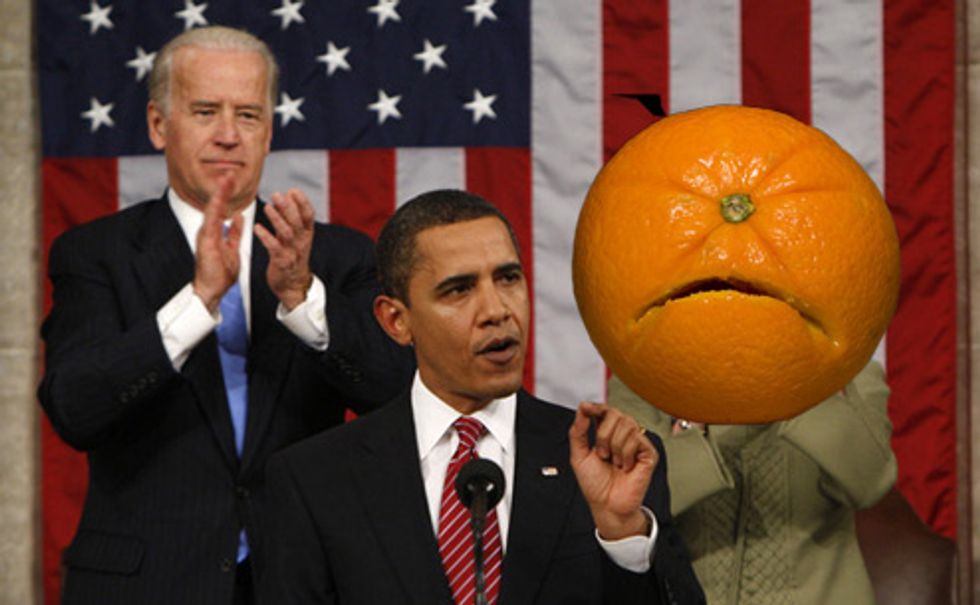 8:30 PM -- We flip on the DirecTeeVee News Mix and there's the shrunken head of Wolf Blitzer, jabbering dumbly about Michele Bachmann, who has replaced "Parker Spitzer" as America's Favorite Weirdo To Respond To the State of the Union. What a delightful evening we all have in store!

8:31 PM -- Oh, how will we make it tonight without Keith Olbermann to make smug references to things, which only serves to annoy the living hell out of Chris Matthews? Let's switch over and see Keith's replacement! Haha but just before leaving Dingus Blitzer we hear him again speaking with pride about how CNN is the only teevee channel that will broadcast Nut-bar Bachmann's speech live! (Does CNN even know that she's not doing the "opposition response," and is just another crazy person on YouTube? No .... how would they even know that?)

8:36 PM -- Everybody's showing up! We were kind of unsure, until right now. You never know, when you throw a party. Will people have something better to do? Decide to all "show up late to be cool," maybe, and then the pizza and everything is all cold and no good? But they're here! They are members of Congress! Where else would they be tonight? This is like a wedding of a loved one, if any of these people were loved.

8:41 PM -- Hooray, Daniel Hernandez is showing up with Lady Michelle. Our Lady Michelle, whatever her title is. Fatty Hater Michelle.

8:45 PM -- All the senators and representatives are showing up with their "dates," to show ... eh, we don't remember what this shows. Love? Let's say love. Love for all things. Transcendental Love for all Living and Non-Living Things.

8:47 PM -- Speaking of non-living things, John McCain and Joe Lieberman showed up as each other's date! You know, like every fucking day of their lives.

8:48 PM -- Chris Matthews notes that when the Republicans or Democrats do their cheering of whatever they believe ("tax cuts," "gays fucking your children on the devil's altar," etc.), it is "like a Slinky." Is that what's it like?

8:49 PM -- But some dour English person on another channel (Bloomberg?) said something about how as soon as Republicans figure out that the whole mixed-up crowd thing is going to make it look like everybody is standing up and applauding whatever Obama says, then the Republicans are going to freak the hell out. Maybe they will start screaming "You lie, you fucking bitch!" to their "date partner," just like on Alaska Date Night (welfare day).

8:53 PM -- The Obamas actually showed up! Nobody knew if they would, because when they got in the limo outside the White House a few blocks from here, Barry reached down and found (as he had prayed for) a case of Loko! Then he threw one to the driver and said, "Let it loose," but then the limo driver just drove to the Capitol.

8:55 PM -- Rachel Maddow mentions that nobody mentioned Iraq or Afghanistan in the entire midterm election campaign, which we are pretty sure is completely true. So, will the massive, nation-bankrupting failed occupations we continue to "fight" even get a mention tonight? From Obama? And is it something that, as a Republican, you applaud (killing Muslims) or yell "You Lie!" about (because it is something Barack Obama, the centrist, just said)?

8:57 PM -- And the Supreme Court clowns show up in their funeral dresses, except for the Evil Swine Trio of Alito, Scalia and Clarence Thomas. Because they aren't showing up, because they hate America that much. This country, Jesus Christ!

9:00 PM -- Ha ha, and here's Wolf Blitzer saying, "It's not every day that the president gives a speech like this." Well said, Wolf, well said indeed! In fact, it is on just one day of the year, for some reason. Not every day, on the one hand, but only on this one day, on the other hand. Stay tuned for a crazy dingbat after the other people do whatever!

9:07 PM -- Oh yahh, Barry is here, talking to people, shaking hands, patting them, Eric Cantor got his back, some lady has hella crochet fringe on her wrists.

9:08 PM -- We have watched a lot of these, over the years/decades, and we would just like to state for the record that we really, really dislike this whole scene.

9:11 PM -- And Boner gives a nice introduction, I guess, in that he didn't growl like Cheney used to, and he didn't cry booze tears everywhere.

9:14 PM -- Oh good lord Biden and Boehner should do a Broadway play together, a Neil Simon thing maybe, "The Two Crying Old Goofs."

9:15 PM -- "At stake is whether new jobs and new opportunity take place in this country, or somewhere else."

9:16 PM -- Woo-hoo the stock market "has come roaring back," and corporate profits are up! But, according to Obama/Socialism, "we measure progress by people," or something. People, eh?

9:18 PM -- Gah, Barry, so you've seen the same country we live in? The worn-out used-up no-jobs empty-storefront country? The bummer country? Yeah, it's not so good.

9:19 PM -- And how China has the world's biggest solar research facility, and the world's fastest computer, and all the money.

9:20 PM -- But America still has the largest, most prosperous economy in the world! FINALLY, something to applaud ... for the next year or three, anyway, ha?

9:22 PM -- Many stood! Some fat people did not, we don't know who they are. Maybe they cannot stand, medically? Anyway, now Obama is going to talk about how we, America, is going to WIN THE MORNING.

9:23 PM -- Uh oh, Obama is talking about how the government "helped" researchers and scientists. How GPS and the Internet and the Space Program were government programs. THAT IS FUCKING SOCIALIST YOU COMMUNIST FUCK.

9:24 PM -- Going to invest in things, eh? Boehner claps without enthusiasm with the crowd, "clean energy technology," eh? How is THAT in the Constitution? The Constitution says the negro is 3/5 of a person, not that "renewable energy will create jobs."

9:26 PM -- Oh god John Boehner is going to have a STROKE, Obama just said America will cut subsidies to Oil Corporations. Boehner is having a stroke. CALL 911 SOMEBODY JESUS CHRIST HE IS HAVING A HEART ATTACK + STROKE!!!

9:27 PM -- "Clean coal." Oh shut the fuck up, Obama. "Clean coal." There is no such thing as "clean coal," you cannot change the amount of carbon released by burning coal. God, come on.

9:30 PM -- It's time for your violent drunken college boyfriend, Jack Stuef! Go read his post. GET OUT OF HERE I AM SERIOUS.