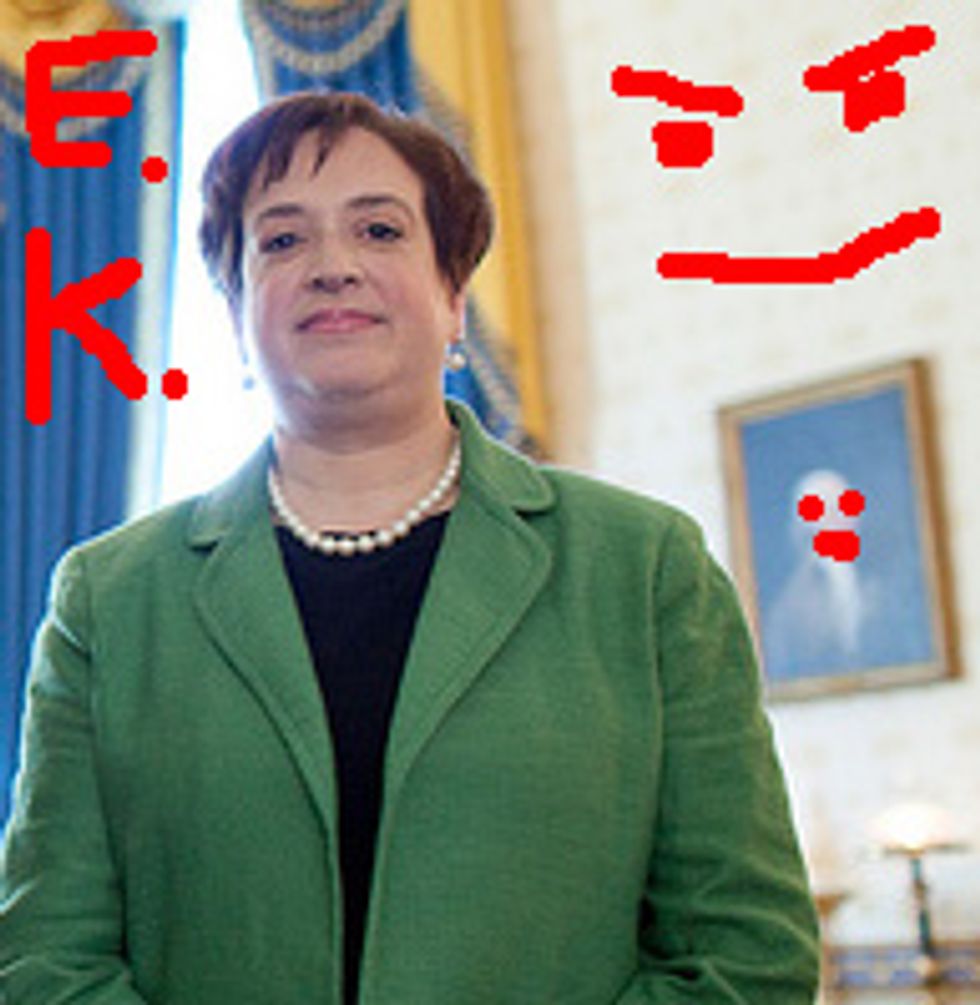 Are we really going to do this? Elena Kagan just walked in, hugged and kissed some ladies (?!) and some men (?!) and now Patrick Leahy is introducing everybody and explaining what's happening. What is happening? Well, Senator Byrd died! Everybody's so sad. Everybody's so sad that it's going to beimpossible to really pay attention to this bullshit confirmation process.

12:32 PM -- Did you know Robert Byrd could recite the Constitution? He could look at it, put it back in his pocket or wherever it goes (the Smithsonian?), and then just cold read it back to you, from his mind. All except the Thirteenth Amendment. Never could remember that one.

12:35 PM -- Kagan clerked for Thurgood Marshall. Is that really so great, Pat? Didn't Thurgood Marshall say something bad about the Original Constitution, just because it allowed blacks to be kept as property?

12:37 PM -- Leahy sure likes to talk about the histories and the civil rights. Did he learn nothing from The Joker?

12:45 PM -- Oh my goodness, this lady worked with Justice Ginsburg, too? Well that is Soviet.

12:48 PM -- Why is Elena Kagan against the American Revolution and its political pamphlet in the voting booth of Independence, Glenn Beck's Common Sense.

12:49 PM -- The real question is this: Can Kagan's eyebrows rise, Belushi-like, until they literally climb right off her head?

"oh, i just rolled out of bed and into a pile of makeup, hi guys"

yeah i gotta get me one of those purple spacesuits

she needs the buzz lightyear helmet to finish off that outfit.

12:53 PM -- Jeff Sessions is finished now, and can go back to his vanilla sperm shake.

12:59 PM -- What we need now is for Code Pink to burst in, pushing Robert Byrd's corpse in a flag-draped wheelchair.

1:12 PM -- Will the Republicans filibuster? If so, says Dick Durbin, this proves forever that the Senate is a dead thing, as is America -- a nation so crippled by stupidity and failure that it can't even fill vacancies on its high court. (We paraphrase.)

1:18 PM -- A filibuster would be a first for a Supreme Court confirmation. Come on, America, let's do it!

1:25 PM -- Fourth hearing in five years! It's like the World Series of boredom.

1:26 PM -- Feingold just wants everyone to know women are the only people actually making it through high school now, so every lawyer/judge/professor/doctor/smarty jones will be a woman by about 2013. Have you seen boys lately? Fat dumb sacks of shit can't spell their own name, which is why their tattoos are all characters from Wii games or Oakland Raiders logos.

1:38 PM -- And .... cut off again. Also, CSPAN? Why isn't this on CSPAN? We've got CSPAN 1 and CSPAN 2 here in the Wonkette Offices. We've got the entire DirecTV news package, even Fox Business, and there's no continuous live feed of the goddamned Supreme Court confirmation hearings? There's a June 17 meeting from Longworth on the CSPAN Senate channel. What the hell, people?

1:44 PM -- It's Snarlin' Arlen, "D-Pennsylvania." Can you imagine sitting in this room all day? At least it's air conditioned.

1:53 PM -- Whoa who is this COMMUNIST who says "it's okay to be liberal, it's okay to be conservative. This is America." OH IS IT? IS IT REALLY, Lindsey?

2:22 PM -- Yeah and so much for that. Fox News is the only cable channel currently showing this snore party. Now Durbin's trying to make jokes about her comment about the Federalist Society, and she just sits there as stone-faced as when Sessions was calling her Mao-Hitler-Stalin.

2:31 PM -- Somebody want to sneak in a question about lesbianism? Here's your in: "Supreme Court rules against Christian group that bars gays." That just happened!