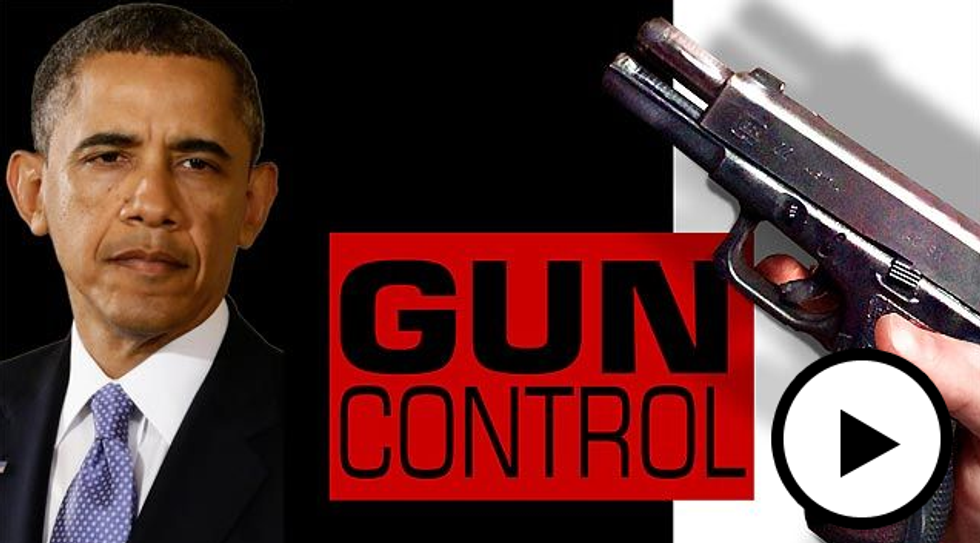 Oh, hey, Wonkers, Welcome to the end of America! The Kenyan Muslim Usurper is going to announce his plan to take ALL THE GUNS! Let's listen in!

12:00 President Obama starts by Politicizing Childhood, reading from letters sent to him by children worried about getting shot in school, with the children who wrote the letters here in the audience. Why doesn't he have any armed children here, to give their side of the story?

12:02 The President reveals his liberal bias by citing facts about the 900+ people killed by guns in the month since Sandy Hook.

We have never been all that fond of the "if it saves even one life" trope, but, OK, sure.

12:05 We are getting the executive order stuff. In general: stronger background checks, helping to make resource officers available to schools if they want them (Obama only wants SOME school choice, eh?), and thank God, allowing the CDC to actually do research on guns.

12:10 Catching up: Congress needs to do some stuff, too, because that's its damn job: Universal background check, ban on removable magazines carrying over 10 rounds, restrictions on assault weapons, and maybe consider actually confirming a head for the BATF for the first time in six friggin years.

12:12 Reiteration that Barack Obama actually thinks the 2nd Amendment is part of the Constitution. None of the gun-fondlers will believe it, of course, because the only reason any government restricts any kind of weapon is to institute fascism.

12:15 Obama promises to Julia, one of the kids who sent him letters, that he will "try very hard" to get Congress to get its shit together and try to maybe cut down on the slaughter. "What matters more, getting an A+ from the gun lobby, or making sure parents will feel safe dropping off their first-grader at school?"

12:17 Wait, you mean that some rights can conflict with other rights? Could we get a ruling on that? We're pretty certain that, as Chairman Mao and the NRA insist, all rights flow from the barrel of a gun.

12:20 And to applause, Barack Obama steps away, promising to sign executive orders that in reality may make massacres slightly more difficult, and in the minds of gun-fondlers mean that it is time to rise up and use the 2nd Amendment, or at least post a lot of stuff on blogs about wanting to do that.

Thing we didn't have time to comment on when Obama said it: Hurrah for pointing out that people with mental illnesses are far more likely to be victims of violence than perpetrators of it. That needed saying.

We now turn the reasoned discussion over to the Newtown Truthers, who will no doubt explain that the grieving family attenting the speech was in fact a group of hired actors.