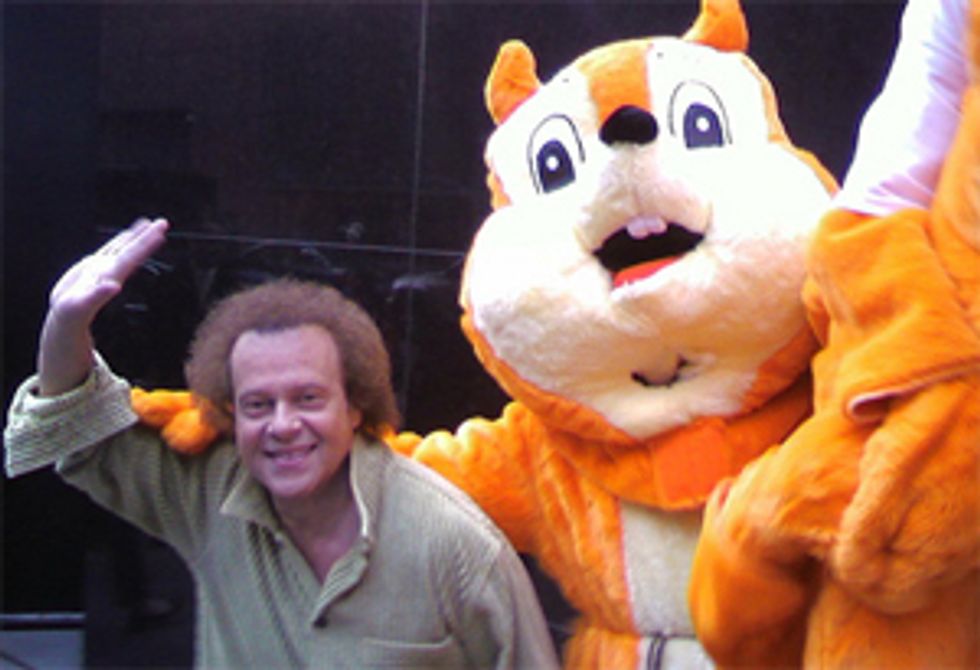 Check out that ACORN squirrel illegally registering black Richard Simmons to vote in the swing state of New York. These liberal tracheotomy squirrels, can you even believe them. They should all be thrown in a bathtub of battery acid and Truck Nutz. Such things will be topics at this evening's debate. Let's see what the lamers on CNN are saying before the debate. BRING YR PANTS.

8:38 -- My oh my there are a lot of people at this CNN roundtable -- a veritable baker's dozen! Paul Begala is talking about Democrats being more popular than the Republicans, because he is sitting at the "Partisan's Panel," which is, uh, extremely different from the unthinking robot table, somehow.

8:39 -- No sign of that anchor who called someone a "cunt," twice. Maybe she got fired? Y'know John McCain calls his wife a cunt all the time, but he doesn't get fired from CNN -- he gets to run for preznint. Which would be worse?

8:41 -- Oh sweet, commercial. That means it's our favorite time of the night: let's see what K-Lo is saying at the Corner.

Well, someone has to be semi-sober liveblogging.

What is this about being SOBER while liveblogging? National Review is like 800 million pounds of no fun.

8:44 -- Ha ha, Dana Bash keeps asking about what McCain's "AIDS" are telling her. Why is she insulting Andrew Sullivan? Oh.

8:46 -- Bill Bennett is worried that Bill Ayers will be named Secretary of Education. Everyone laughs at him, but we think that's not a bad idea. Ha ha, he'd teach all the kids in schools to bomb CNN. In any event, he couldn't be worse than Bill Bennett was.

8:48 -- There are seriously 19 thousand humans at this debate panel. Among the new additions this week: Amy Holmes and the dead Heath Ledger. WTF how'd they do that.

8:50 -- Alex Castellanos was asked to describe McCain's message in one word. Castellanos' answer the entire text of War & Peace.

8:52 -- Oh here's America's Ohio panel of the undecided fat voters. They can't pick candidates and it makes them sad so they just eat all night long.

8:54 -- There are their little tables, for the candidates. Who's the moderator, Schieffer? Well Bob Schieffer will be getting footjobs all night long. "Heh heh heh," Walnuts will say as his foot gropes Bob Schieffer's hoo-hoo.

8:56 -- Here they are talking about old Bill and Hillary Clinton, and whether people care what they say. "Yes," says Toobin. "No," says Gergen. "GOT ME POCKETFULS OF GOLD," shouts the 19th century mining prospector, who's been invited to the panel this evening somehow.

8:59 -- Oh well that's it. Your editor and "top desert furry" Ken Layne will be typing his stuff for the next half-hour. Enjoy, ACORNs! GO HERE.