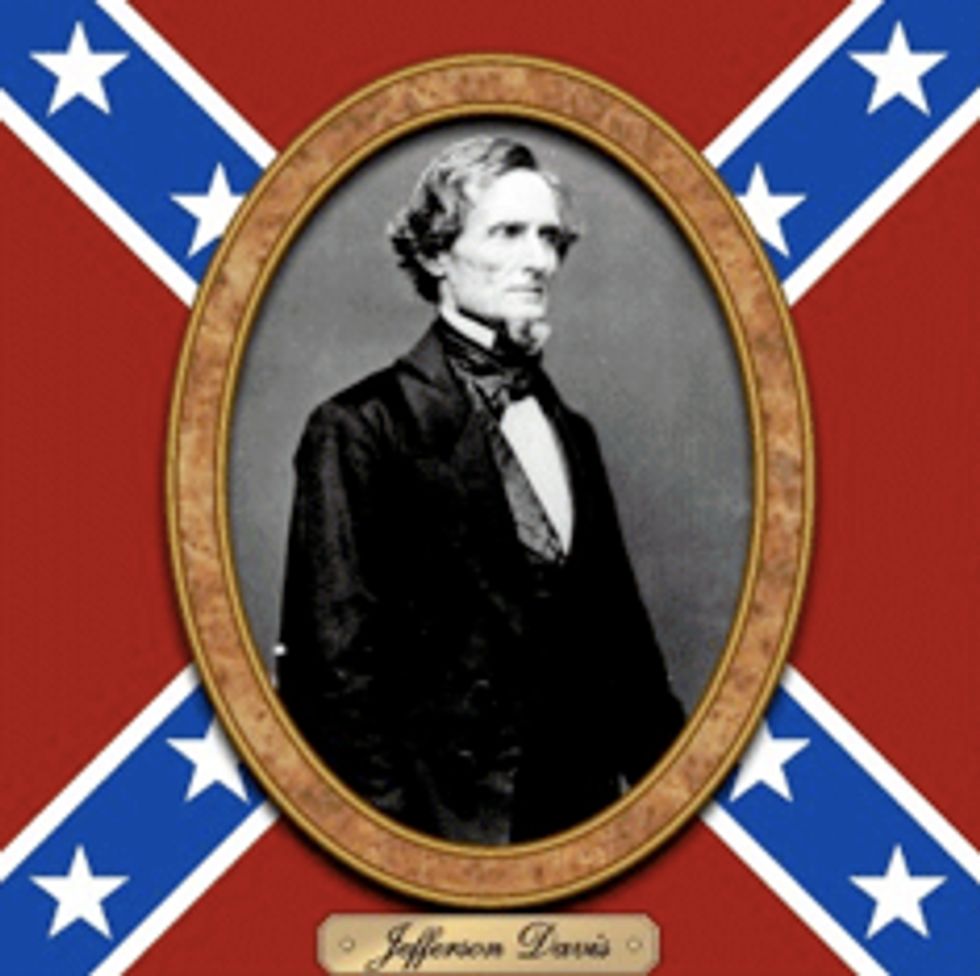 That's Jefferson Davis, in the picture! Nearly 150 years ago, Jefferson Davis moved to Richmond, Virginia to become the first president of a new country where slaves could still pick the cotton, and indigo. Davis' run came to an end eight years ago, when Democrat Mark Warner stole Davis' Richmond mansion and all of its slaves. Democrat Tim Kaine did the same to Mark Warner four years later. But now it is Republican Bob McDonnell's turn to take the mansion and slaves back from the liberals, the end. Polls close in a few minutes! Wolf Blitzer says he is "so excited," oh ho ho...

HEY, is there a local election in your home town or state? Mayor or alderman or sheriff or whatever? Send us the results and we will post them. We heard rumors about some hot mayoral race in Tulsa, hmmhmm!

6:58 -- Jeannie Moos is talking about a website with cartoon Barack Obamas and you can dress him in different outfits, depending on the weather. And then Barack Obama will give you the weather report? This is so in-depth, from Jeannie Moos. The website is Politico.com.

6:59 -- Oh god if the Lou Dobbs show is actually going to run tonight, we may have to turn on terrible MSNBC. Lou Dobbs hints that there could be a repudiation of the Obama Agenda in "40 states." There aren't even that many states in Mexico, Lou Dobbs!

7:01 -- Wolf Blitzer just said, we have zero votes in from Virginia polls, and Bob McDonnell is leading! But they will not call it yet because they are journalists.

7:02 -- Jessica "Hologram" Yellin is reporting from on the ground, in Virginia, and she brings with her a scoop! "How are people voting? It depends on who you talk to." NO! It is either out of love or hate for Barack Obama, in Washington.

7:05 -- Oh now here is a nice lady on the ground in New Jersey. What do they care about there? It depends on who you talk to! Actually it doesn't, it's PROPERTY TAXES, COSMIC PROPERTY TAXES, PERIOD.

7:10 -- It's Chuck Todd in his role as "NBC Political Director," just like old times, before he became another bad White House reporter.

7:11 -- Chris Matthews! WHY DON'T PEOPLE LIKE OBAMA THEY HATE BUSH THEY'RE DIFFERENT WHAT IS THIS.

7:12 -- Chris Matthews argues that Obama tried to rush too many massive reforms through at once, because the Netroots made him, and then he ran into the slow pace of Congress, and this pissed off the Netroots, who ergo refused to help Democrats this year, and so the Netroots are yet again to blame for everything wrong with America today.

7:14 -- He adds (to paraphrase), "you can't just ask Rahm Emanuel for pancakes and expect, what was it, pancakes, you can't expect those pancakes the goddamn pancakes from Rahm." Chuck Todd is chastised for laughing.

7:19 -- Hey it's Pat Buchanan? What party are you in nowadays Pat, Matthews asks. Buchanan responds that he votes for any ticket with a "Goebbels." (Libertarian.)

7:21 -- Pat Buchanan doesn't blame this likely loss in Virginia on Obama! He will be fired from the media.

7:22 -- Eliot Spitzer is guest-punditing! Remember that time he had sex? He's so smart however.

7:23 -- One very special candidate's talking shit on Twitter, in our general direction:

"Jonah said he would eat me if I lose!" Good luck Joshua! WONKETTE ENDORSEMENT: JOSHUA J. GOLDBERG FOR NYC COUNCIL.

7:25 -- Eliot Spitzer and Pat Buchanan were just fighting about whatever the script told them to fight about.

7:31 -- Hardball Sideshow Segment, showing the wackiest political stories of the day, as though it were an afternoon at the circus! Topic: Sarah Palin is insane in this new way. Commercial break.

7:33 -- We have not been analyzing why Creigh Deeds is getting his ass kicked so badly, because there are too many reasons. Bob McDonnell didn't act like a lunatic and Creigh Deeds tried to paint him as a lunatic. Plus demographics and money and anti-incumbent atmosphere and lack of a strategy and the fact that one is named "Bob" and one is named "Creigh."

7:41 -- Be still, our beating heart, for there is an Eric Cantor on the television. He looks so chiseled when he lies.

7:45 -- Matthews to Cantor: "Is Virginia a Palin state? Sarah Palin is the worst person alive." Eric Cantor doesn't need to bring up partisan bickering and divisiveness on television, Eric Cantor declares, for tonight is a victorious night for Virginia!

7:58 -- Look what happened while the editor was eating pizza and dirt from the floor: Bob McDonnell wins Virginia! Congratulations, Bob McDonnell! We hope that platform of cutting every tax and preserving every job and raising $7 trillion by selling off state liquor stores works.

8:01 -- Keith Olbermann is now on television! "I hate this political entertainment host on a rival network who gets better ratings than I do," Olbermann reports.

8:02 -- NEW JERSEY POLLS HAVE CLOSED. It is too close to call between the fat man and the Goldman Sachs executive. Meanwhile PROPERTY TAXES ARE STILL THROUGH THE ROOF, JESUS.