Liveblogging The Last Debate In The History Of Mankind, Part III 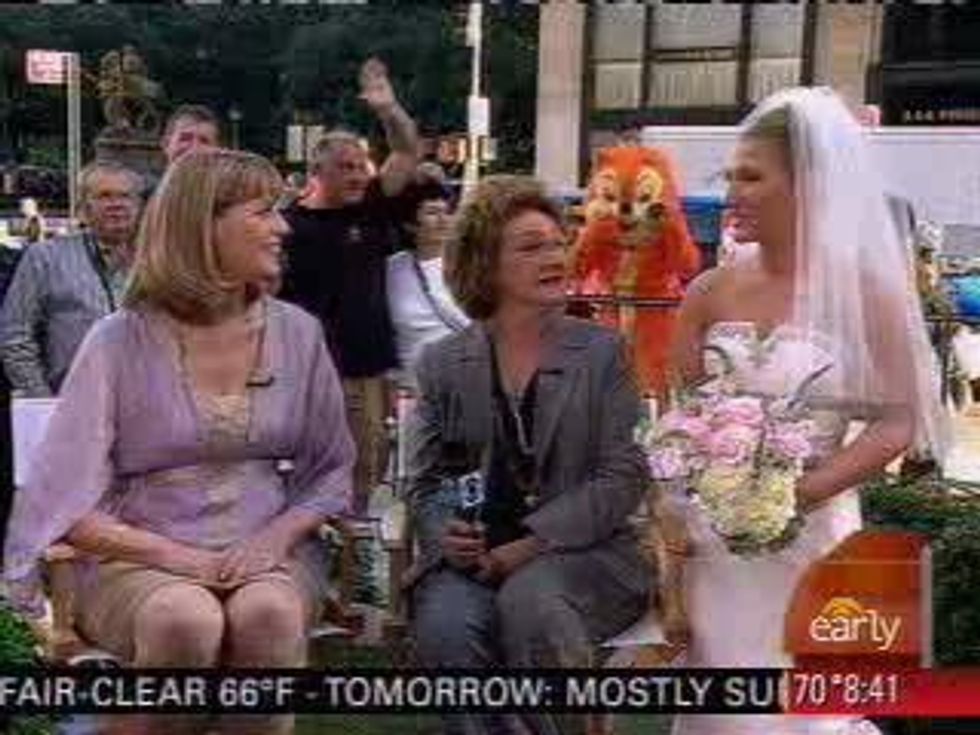 Howdrunk are you people yet? Joe the Plumber is going to be elected President of America, because he has suffered so greatly for all of us, and gotten all of us drunk by being mentioned fourteen billion times by each presidential candidate so far. Bob Schieffer is being a hardass, oh boy! He even asked about Barack Obama's terrorist pals, and John McCain said he wouldn't have had to be so mean to Obama if he'd gone to McCain's abandoned Bingo halls in Metairie.

9:31 PM -- Obama says, Hey man I cannot be responsible for the comments of John Lewis, an American hero whom we both admire! Oh and now he is pointing out what a sorry sack of poo Sarah Palin is. People are cynical, tit for tat... now he is bringing it back to the boring boilerplate.

9:33 PM -- "Let me just say categorically, I'm proud of the people that come to our rallies." Oh good Lord. "The most dedicated, patriotic men and women..." Yes, too bad they're being videotaped.

9:36 PM -- "He engaged in despicable acts." Mmm, sounds sexy! Tell us more about these despicable acts. Now, on to Acorn, the terrorist organization that registers people to vote sometimes. Subverting democracy!

9:39 PM -- Hey speaking of associations, what about that Charles Keating guy that Grampy used to "pal around with"?

9:40 PM -- Obama, tell us why Joe Biden is better than Sarah Palin. Without being sexist. Man, the uncommitted voters of Ohio do not seem to be liking Barack Obama so much tonight. Where's the love, Ohio?

9:42 PM -- The voters of Ohio REALLY do not care for Sarah Palin. Not the women, anyhow. Broads hate this Palin character, good LORD. Are all the lady voters in Ohio suddenly dead or asleep or something? John McCain cannot even pronounce "breath of fresh air" correctly. "She understands that autism is on the rise." Yes, that is a very important quality for a vice president to possess.

9:44 PM -- Barack Obama offers comically faint, vague praise for Sarah Palin. "She has two eyes...and the full complement of other sensory organs, which is great..." And Obama clumsily pivots to economic garbage.

9:48 PM -- Gaack, that same dumb list of different technologies. McCain loves that list, because he has memorized it, and it takes up time. Otherwise none of that response made sense, or was even in English.

9:49 PM -- Obama: Treat our oil fields like vacation days: use 'em or lose 'em. We can't drill our way out of the problem...Now here comes his list of technologies, which includes geothermal, whee! P.S. NAFTA SUX.

9:51 PM -- McCain does a close reading of Obama's response with a canned bit about how he's eloquent but he lies with his words. Barack Obama has never traveled south of our border, whereas John McCain is secretly Panamanian and had sex with some hot Brazilian model back in the 1930s!

9:54 PM -- Yes Barack, we need a president who will enforce unfair trade agreements. Amazingly, John McCain does not snicker and correct him on this.

9:55 PM -- Barack Obama wants to sit down without preconditions and meet with the terrorist Hugo Chavez!

9:56 PM -- Here we go, the healthcare question that they have all been so eager to answer. Obama doesn't really answer the "cut costs or expand coverage?" question, but offers up some anecdote about ladies in Toledo who appeared to be in their 50s. Actually, they were in their late 20s, but they have spent their lives in Toledo. (Cue angry emails from Toledo readers.)

9:58 PM -- McCain widens his eyes when he says "working families," like it either pains or disgusts him to say these words. He hates obese people, too!

10:00 PM -- Go read Jim's continuation of this endless debate night. Ha ha, John McCain is OUTRAGED that Joe the Plumber will not be fined any dollars.