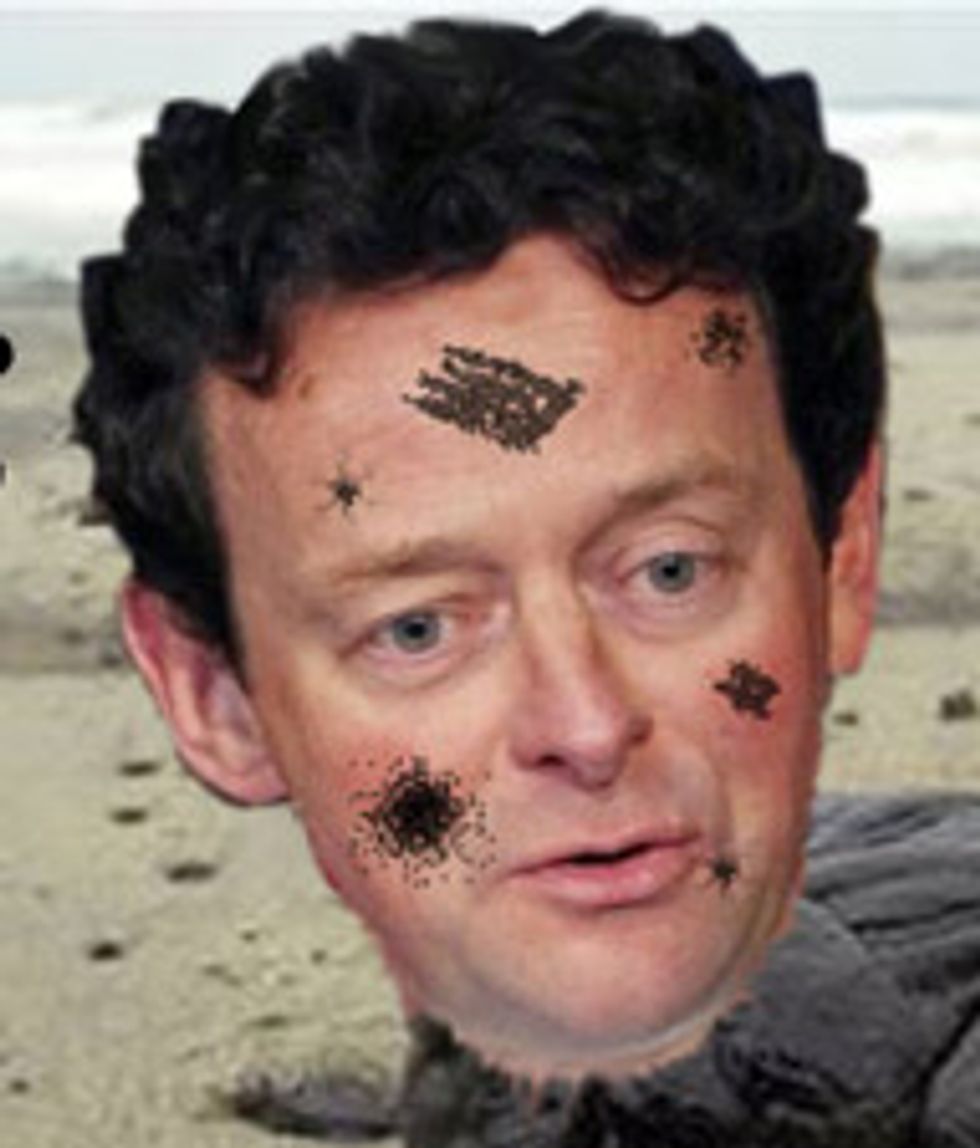 OKAY NOW THE ACTION IS HAPPENING. Tony Hayward just took his Oath of Grillin' and some lady is cold goingnuts, yelling and screaming, oil all over her head, five or six Capitol police dragging her out. Tony just sitting there, trying not to look behind him. Oh jesus what a circus, welcome to America! Ha ha, relax Tony, only another five hours of this.

11:27 AM -- The sadder question may be, "Was that the most exciting moment of this rote grilling of a Bad Corporate?"

11:28 AM -- Our first batch of liveblogging is right here, along with many fine comments by Wonkette's notorious commenters.

11:28 AM -- So how did that lady get in there with all the Black Oil makeup all over her face, just like the picture of Tony Hayward seen here? And why did it take so long to get her out of there? And why was Bart Stupak smirking? Can a MacBook smirk?

11:32 AM -- Oh man, now the MSNBC video next to Hayward is just so much sad footage of dead turtles and whatever.

11:34 AM -- "An eruption of screams and protest," says the MSNBC person. Who was the mystery oil lady?

11:37 AM -- Wonkette has learned that the woman is named "Diane Wilson" and that she said "You need to be charged with a crime!"

12:17 PM -- But Stupak's talking to Dana Bash on CNN instead of tending to the nation's business of doing show trials for the teevee.

12:19 PM -- This MacBook is not at all surprised that BP had another awful accident, because this MacBook is connected to the Internet, and has googled BP.

12:29 PM -- Great, now they're asking him about how the company keeps its meeting minutes and etc. THIS ISN'T HELPING.

12:31 PM -- We are going to end up sympathizing with Tony Hayward before this hearing is over.

12:32 PM -- Bloomberg's picture-in-picture of the UPSKIRT GUSHER fills two-thirds of the screen. This is, thus far, a record.

12:33 PM -- Henry Waxman takes over. This should be soothing to Tony Hayward as Henry Waxman looks like a cartoon in Punch.

12:37 PM -- "You should have some knowledge of these issues, I sent you a letter in advance ...." Henry Waxman is now reading BP documents saying the cheap/dangerous well casing would save $7 million or $10 million for BP, but Tony Hayward says NO, politely, the well's "long term" performance would be best served by the "long string" casing, but NO, Waxman says only 2% (or 10%) of the deepwater wells use String Theory.

12:42 PM -- "You're not taking responsibility, you're kicking the can down the line," Waxman says. Hayward is acting like he has nothing to do with what happens at his company, says Henry.

12:44 PM -- John Sullivan, R-Oklahoma, is piling on Tony/BP for all these American accidents, BP's lousy safety record, etc. Hooray for a Republican being aware of the oil spill and BP's involvement.

12:46 PM -- We've got other stuff to post today, so your editor is now going to halt this liveblog and edit/post other items we've got in the queue. Go John Sullivan, etc.! For our next witness, oily dead things!

12:49 PM -- Eh but they're going to recess again after Dingell asks his question.

12:49 PM -- ACK OKAY HAYWARD YOU HAVE USED UP YOUR GODDAMNED SUPPLY OF "I WAS NOT PART OF THAT DECISION-MAKING PROCESS" and "I DON'T RECALL THAT." You are the CEO for fuck's sake, enough testimony, lock him in a barrel of crude, send him back to Saudi Arabia, the end.