Liveblogging What Mississippi, Alabama Think Of 4 (Still 4!) Guys In Ties 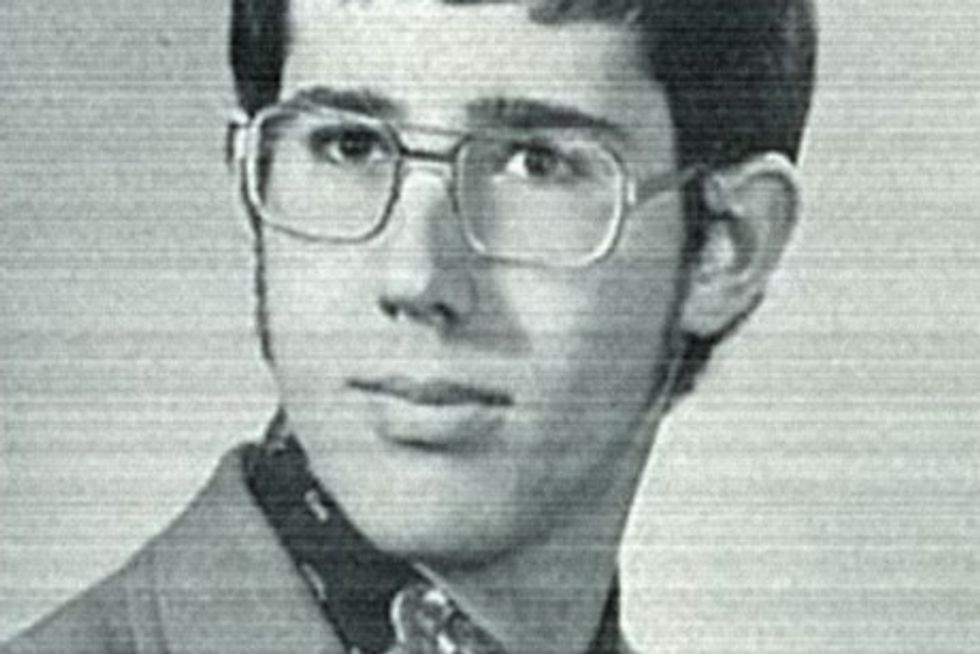 Hi. Tonight we are reminded that this country has 50 states and even some territories, and each must have her chance to say, "Ahem" regarding positions of power. It's time for us to tune in to Mississippi and Alabama (and later, after this Wonkette has gone to bed at 8PM PST or so, Hawaii) and see to what degree its people enjoy the last four lemon and orange Starbursts left in the package, as it were. Already John King is pressing rounded red squares, which means "N/A" in terms of actual information. So far we know that Romney is leading is Miss. and Santorum is leading in Ala. But do stick around, stay awhile! Look at the percent signs on your screen so long that they start to look very strange!

8:04PM -- An unhappy former spokesperson with a decent tan, for this time of year, is convinced that someone will go away after tonight. But whooooooo? (Gingrich.)

8:07PM -- A Gingrich spokesperson said, "We're not even halfway through" this campaign season, which is just really an eighth wonder of the world, as sentences go. "We're a credible candidate," this man (who is also wearing a tie) added.

8:11PM -- A lady in the Rick Santorum camp is reminding us how terrible Romney is at success, this decade and the previous one.

8:16PM -- "EVERYTHING WE SAID BEFORE MAY BE WRONG" -- Wolf Blitzer (paraphrased). "STAY TUNED, WE ARE NOW ABLE TO CREATE BREAKING NEWS BY GETTING PAST BREAKING NEWS WRONG AND THEN CORRECTING IT"* *He did not really say any of this, sorry.

8:17PM -- Meanwhile the New York Times offers "a complete breakdown" (indeed, NYT, indeed) of Alabama's exit polls. BTW, Newt Gingrich is doing quite well there, so the lady from 8:15PM may want to watch herself!

8:19PM -- "Look at that battle that's going on," says Wolf, and he is talking about exit poll numbers from Mississippi, where Romney, Santorum and Gingrich are littrully neck-and-neck.

8:26PM -- Wolf Blitzer wants his man in Mississippi to find out, "What's inside those bags, if you don't mind?" NO NO NO, do not open the bags! Fine, the bags just have some absentee voter information in them. This is so unnecessarily confusing, thank god we are not voting tonight, we might just vote for "Nice CNN guy finding out about some bags."

8:32PM -- According to Mr. King, some percentage of another different percentage, which is in turn another percentage of both, people think that Romney is not conservative enough, but is also vastly more likely to beat Barack Obama, which does not mean they have even voted for Romney. Ornery, people are.

8:37PM -- Santorum does not have a Woman Problem in the South, obviously, but nor does Romney.

8:45PM -- Here is how a Palm Pilot works -- CNN ballot guy in Pascagoula, Miss., who is going to completely fuck up these results because CNN's Shannon won't leave him alone.

8:47PM -- What! Now Gingrich is leading in Mississippi, still with only >1%. Things are starting to get...to be happening.

8:51PM -- VERY, VERY CLOSE, says Wolf Blitzer, which is how you would describe these results if you were a professional hired to explain it.

8:52PM -- John King is committing voter fraud on his touchscreen device, BECAUSE HE CAN.

8:55PM -- Newt Gingrich stunt double in Harry Potter glasses is explaining numbers on a sad, old, gray screen. Basically Rick Santorum is having a moment, it feels so long.

8:58PM -- A lady is talking in place of O'Reilly about PINHEADS. Never mind, back to The Most Trusted Name In News (maybe? Who is that again?)

9:00PM -- "We're going to be bringing you all the numbers first before anyone else." -- Wolf. But um, back to the inmates for now.

9:09PM -- The discussion right now is about at what time to the second Gingrich will drop out, IF HE EVEN EVER DOES.

9:11PM -- Oh, Intrade, we forgot about you. Intrade knows the future and in the future, Santorum wins Alabama and Romney wins Mississippi.

9:13PM -- But how can that gypsy website really know? Especially since here we have Santorum winning Mississippi, too, right now, right this second.

9:18PM -- "Sixteen percent -- that's a significant number of votes," says Wolf, who thought he was losing you. And so with that, Santorum is indeed "winning" both states by quite a lot!

9:21PM -- CNN would like to declare that it is the only network in the ballot bunkers in Mississippi, confusing the heck out of old ladies by uttering lots of numbers while they're trying to sort and COUNT!

9:28PM -- Ha, so Romney is now in third place in Mississippi. But WILL HE STAY this bad? Or will he become two percent or so less bad?

Would love to see @JohnKingCNN scrawl REDRUM on his screen as night wears on and madness descends.

9:30PM -- And more knowing: Santorum exceeding others by 4% in Alabama TOO. For now.

9:33PM -- Mitt Romney is on now, not giving a concession speech or two in one, but rather answering probing questions about Afghanistan, and he is repeating his usual message, which is that it is not the president's job to decide what to do with guns and missiles, really, or anything, except buy and sell parts of America, just buy and sell, until there is no deficit left in one's offshore Federal Reserve, there is one of those, isn't there?

9:38PM -- Romney has perfected the televised fake delay, and has also stolen all his lines from Jon Huntsman.

9:39PM -- "I know you have a limited amount of time..." Wolf tells Mitt. More soothsaying from a master of the form.

9:46PM -- "They keep happening, and they keep mattering," Rachel Maddow says re: primaries, which is a bit too sobering and real for this small-percenty time of night.

9:48PM -- Not a compliment, but CNN is just so dynamic compared to this serious discussion about variables.

9:50PM -- A recap courtesy Maddow, 72% of the vote is in in Mississippi, and yet it is firmly and undeniably and evening-ruiningly a "three-way." Race. Less of the vote in in Alabama, and yet the deal is the same.

9:53PM -- NBC is calling it: SANTORUM "WINS" ALABAMA with 35% of the vote even though Mississippi is way ahead. Oh well.

9:56PM -- Haha, back to CNN where despite having "all of the" numbers "before" "everyone" else, no determination has been made about the fact that Santorum has won and has winnèd Alabama.

10 Freaking O'Clock -- "It couldn't be much closer than this" in Mississippi, that is. But but but but and there is 79% of the vote in, and technically nobody is in first place, but will Gingrich resign from life before bedtime? It could happen!

10:11PM -- "This is changing every single second" and the technology is "amazing" according to CNN, which has never encountered e-mail, lamps, telephones, EZ-Pass, or any other form of instantaneous electronic thing.

10:14PM -- In case you were wondering, Rick Perry is at SXSW grooving out to, I don't know, GRIMES, and talking with a guy who "makes water fun," which means he fills old water bottles with vodka and walks around, listening to bands.

10:20PM -- And because stats are fun, you could fit all of the people who voted for Santorum in Alabama into the Rose Bowl. Here they are.

10:22PM -- And Politico is so weird now that it doesn't even put the results in the subject of its Breaking News e-mails. "Breaking: Results." Thanks. Also, NBC? Was doing this a long time ago, and definitively.

10:25PM -- We are now waiting for Rick Santorum's spirit to soar verbally.

10:28PM -- Romney guy Eric Fehrnstroum is talking about how Rick and Newt can't get enough delegates, which is funny because can Romney at all either? This guy is also clarifying about the Planned Parenthood thing (see 9:02PM). Planned Parenthood "does not meet Romney's test" in terms of funding, but the organization will still exist. It just won't have a lot of money to screen women for breast cancer, oh. That's OK, yeah, fine. No.

10:31PM -- Santorum will now speak, from not even either of the right states (Louisiana). Someone has declared Santorum an "honorary cajun." Er...

10:33PM -- "Who'd have thought" that someone with no money could give a bazillionionononaire a run for his -- literally -- money, translation.

10:35PM -- Haha, Rick Santorum looked us right in the eye, and said, "Bless you, I love you," even though we did not sneeze, because he was talking through us to Bella. Meanwhile other daughter Elizabeth is getting bombed on a beach in Hawaii, for spring break! No, a political event!

10:37PM -- Obama or somebody is "irresponsible" and "irresponsive." GOOD ONE.

10:38PM -- We are in the heart of gas. One of the sons is rolling his eyes in overwhelming fatigue, or hatred.

10:40PM -- Oh my god, Rebecca Blackdaughter and geeky young son want to smash fists to faces over who loves faith MORE. She is so into it. "YEP," she cries, beaming and clapping. (There was a word about faith spoken -- "faith" -- and it was a BIG HIT.)

10:42PM -- These people just LAUGHED about the fact that the Santorum campaign is "heading to Puerto Rico next," which...what is that all about, you crazies?

10:43PM -- OH MY GOD DRAMATIC DEVELOPMENTS. While we've been on air, Santorum has won Mississippi or something. Karen just mouthed "WE WON" and away they go! Thank god, different god.

10:44PM -- We are watching this veeeery veeeery cautiously.

10:49PM -- OK, nine years later, Rick Santorum has also/still/again won Mississippi, so this yearbook photo ended up having a purpose after all, great.

10:50PM -- So, delegates, anything, anyone? Nothing, but we are being told that this is very "dramatic." So, well, there is this, from the NYT, which shows Romney a million (more than 200) delegates ahead, even after all this. BAH!

10:54PM -- Anyhow, tonight is also Hawaii, later on, because they are just waking up over there. Now Callista Gingrich is here telling us that "We are committed to removing [Barack Obama] from the White House." Sounds mean. The Gingriches believe that their message is the reason that this week, Obama "stepped up the rhetoric." Uh.

10:56PM -- HOW AND WHERE DID NEWT GINGRICH CREATE JOBS EVER?

10:57PM -- Suppose it's worth noting that Newt did come second in Mississippi.

10:58PM -- The question is, wha? A "substantial number of delegates" which Newt describes as "greater than what he had yesterday" has been acquired, and "thank you." Technically all this is true.

10:59PM -- Some Romney heckling. "You're not a very strong frontrunner." Much turning head to the side and looking down at the podium, which is Newt's way of saying, "I have just made a funny."

11:02PM -- Since none of these people are going away, why should we go away, or eat ever, or sleep? So we're still here, making you WORK at that scroll mechanism.

11:05PM -- Newt says it turns out we have 1600000000% or something more oil than we thought we had, and it's all under North Dakota, home of the, ahem, Theodore Roosevelt National Park. Do you remember, Newt, or anybody else, what that was all about? That guy with the tiny glasses who liked trees?

11:08PM -- "If you will Twitter" then Newt can remain alive forever. Goodbye, he is not dropping out, but he is walking away from this night to the cool sheets of a Best Western bed.

11:13PM -- So. There is really nothing more to say. Because elitist Mitt is in New York, one of the two evil cities of America where real Americans do not really live, according to Santorum, trying to raise money, money that may as well be injected into Planned Parenthood or Charity:Water or the FED, for Fed's sake, because a lot of good it is doing for this "frontrunner." GOODNIGHT!