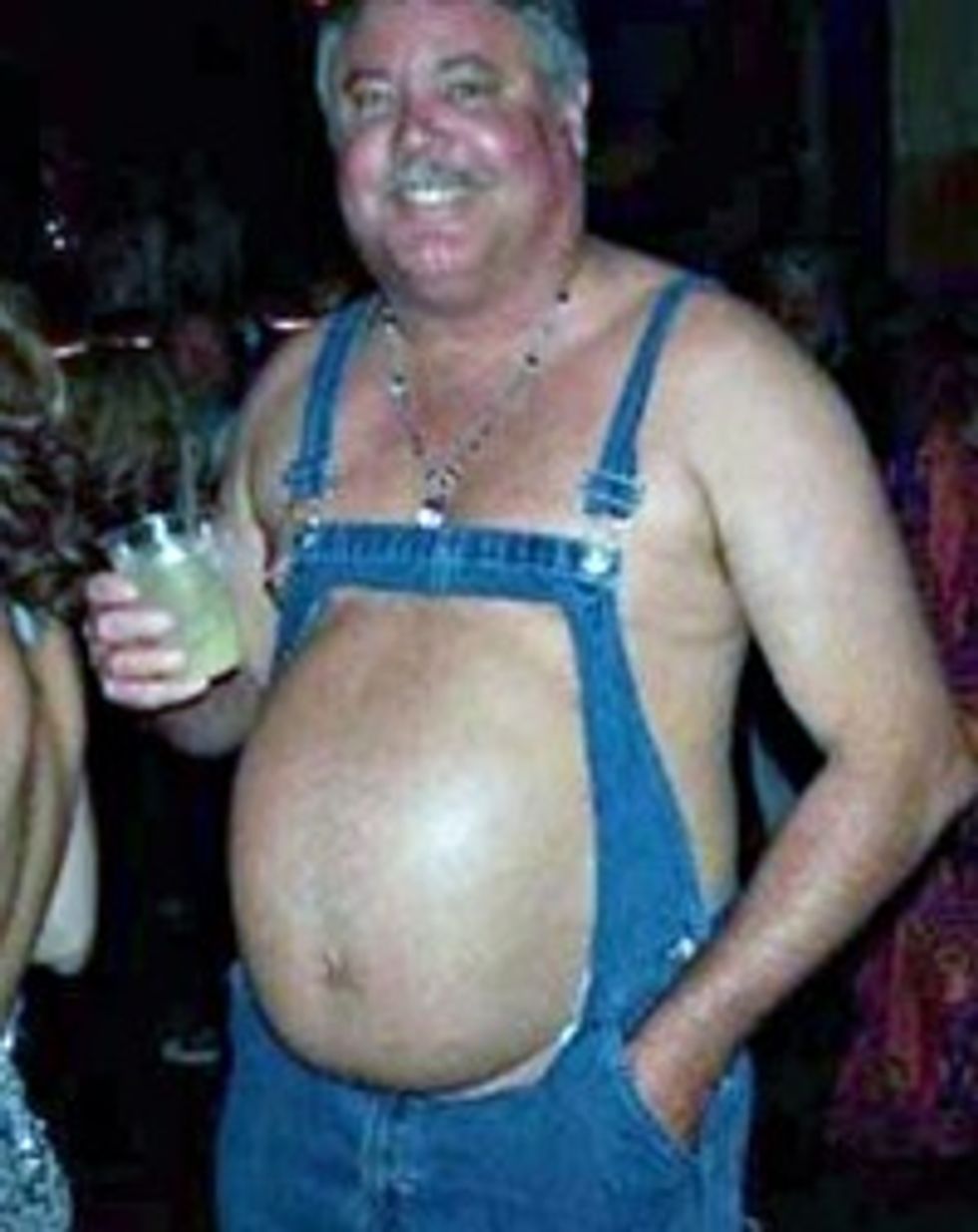 Oh look here is a kindly gent who maybe voted today, wearing his "Dress-Up Overhauls." With Ohio and Pennsylvania under Obama's belt, is there any way, mathematically speaking, that John McCain can get elected? Not that "math" and "numbers" are the be-all and end-all of voting, but still...

9:30 PM -- Oh dear your editor rather hastily drank 2 Harps and now is at the bottom of her glass of Jameson, and typing is getting difficult.

9:32 PM -- Florida still too close to call. Oh by the way! A reader called "Justin" wrote to encourage us to watch BBC America, which is full of drunken teabags attempting to make sense of our curious voting folkways. Check it out, if you have BBC America on the cable teevee, because it is relatively soothing and sort of cute.

9:33 PM -- Gene Robinson explains how somehow everybody ended up wanting Barack Obama to solve their economies. Rachel Maddow, in a weird mime costume, still seems sort of gloomy. No, it is not a mime costume: it is a suit before the tailor has actually sewed it together.

9:35 PM -- Chris Matthews says "The fundamentals of our economy are strong" was McCain's death knell. See, here is the thing: McCain didn't even know what he was saying, he was just reciting a line, just like Obama talking about "the change America needs." It just happens that McCain said that completely rote and predictable thing about a topic that suddenly was incredibly important to, uh, everybody, suddenly.

9:39 PM -- A plague of re-elected Republicans: Sessions, Roberts, Cochran, Inhofe, and odious Mitch McConnell of Kentucky. But yay, Jack Reed keeps his seat in RI, as does SD's Tim Johnson. Here, this code should produce a magical map of various Senate races:

Hmm, well that did not work out so great. Maybe we will try again later.

9:43 PM -- Chuck Todd: "College-educated whites" are the "get" demographic of the evening. Congratulations, Wonkette readers, you are the new coveted voters of the new millennium! (Wonkette readers of color, you are very important too of course, you just fell into other Obama buckets already.)

9:46 PM -- Chuck Todd trying to understand how and why the McCain campaign spent so much time trying to shore up the base. The swing states have been a disaster for him. "Dissect this for us," instructs Olbermann, referring to "this mixture."

9:47 PM -- What is this holographic set on MSNBC supposed to look like? The Roman Coliseum? The Oval Office? Chuck Todd's Grecian Sex Boudoir? The state of Florida is 110% as tall as Chuck Todd.

9:49 PM -- So this is pretty much over at this point, right? It just now occurs to us that none of you fuckers are reading Wonkette because you are all involved in godless sodomite hedonist celebrations for your Hopey. Well, we sitting at home drinking and filling our bellies with stale popcorn and waiting, waiting to go out.

9:51 PM -- John McCain was maybe pretty smart to hold his "victory rally" on the lawn of some Phoenix hotel with a handful of reporters.

9:55 PM -- ELECTION SHOCKER #2: Texas goes to McCain. Gene Robinson wants to talk about the adorable little girl who just talked to the reporter in Grant Park, and how the Republican party looks "like the America of the past instead of the America of today."

9:57 PM -- Four years ago, your editor was sitting gloomily on a couch as Ohio slipped away and thought, "Hmm, glad I didn't go to that Democratic 'victory' party." Tonight is a much better night. So raise a glass to your Republican friends because it was not so long ago that you Libtards were precisely in their position, and remember how much it sucked.

10:00 PM -- Many polls are closinating as we speak! Including Iowa, which Obama will WIN. And jesus, MONTANA is too close to call. Go look at Jim's liveblog as we wait & wait for more newz.