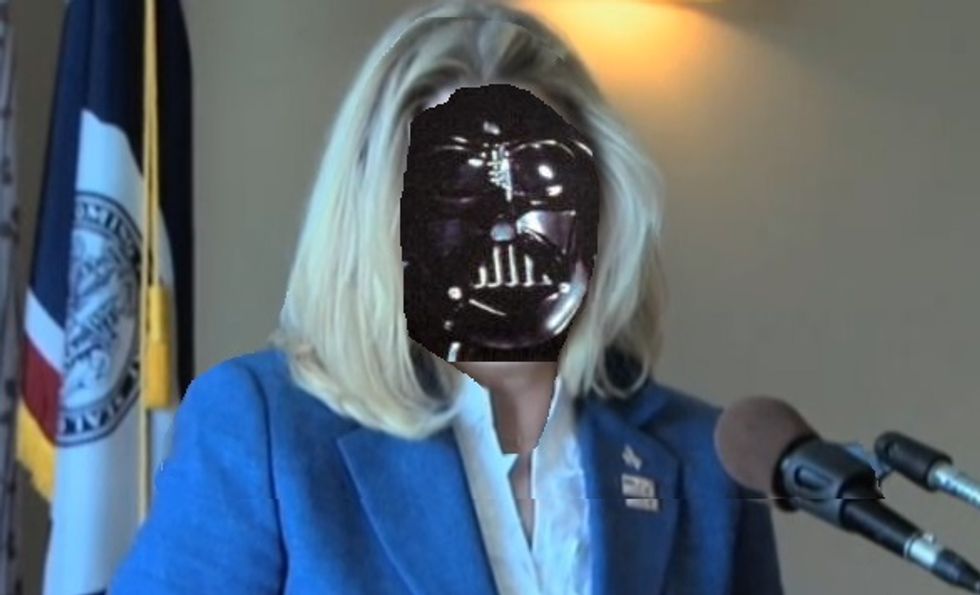 Wyoming's Own Liz Cheney isvery from Wyoming, and probably so is her husband Phil Perry, who "continues to practice law in Washington," and "has been registered to vote in both Virginia and Wyoming for the past nine months, even though he signed a document in Wyoming saying he was not registered elsewhere," which is such a Wyoming thing to do, right? We don't know, honestly, that's why we're asking. You see, we are not as from Wyoming as Liz Cheney and her husband who practices law in Washington and isn't from Wyoming but is registered to vote there AND in Virginia, because he's from Wyoming.

Let's look at Wyoming's voter registration form (.pdf) to see what kind of fraud that high-powered Washington lawyer and Liz Cheney spouse Phil Perry committed in the name of being Mr. Mrs. Wyoming:

"I do solemnly swear (or affirm) that I am a citizen of the United States; that I am a bona fide resident of the state of Wyoming and this county; that I will be at least eighteen (18) years of age on or before the next election; that I am not now registered in another county or state; that I am not currently adjudicated a mentally incompetent person; that I have not been convicted of a felony, or if I have been convicted of a felony, I have had my civil or voting rights restored by a competent authority; and that the voter registration information contained herein is true and accurate to my best knowledge and belief."

Depending on the legal definition of "bona fide," Phil Perry is either definitely from Wyoming or totally from Wyoming. What was that other thing? Oh yeah, the "voter fraud." There are some words here that say "I am not now registered in another county or state," which is confusing. Maybe well-connected Washington lawyer Phil Perry can explain what this means. What's that, Phil? Too busy being illegally registered to vote in two places? That's a bummer.

Guess we'll just have to figure out for ourselves what happens to Wyomingish Washington lawyers who lie to the state of Wyoming:

(a) The following acts in connection with or related to the election process or an election, if knowingly and willfully committed, are felony offenses punishable by not more than five (5) years' imprisonment in the state penitentiary or a fine of not more than ten thousand dollars ($10,000.00), or both:

False swearing consists of taking an oath required by the Election Code with the knowledge that the thing or matter sworn to is not true and correct.

See, with the KNOWLEDGE that the thing or matter sworn is not true and correct! Clearly Phil Perry did nothing wrong, because he just didn't know that the little slip of paper he carries in his wallet that says "REGISTERED TO VOTE IN VIRGINIA" did not magically dissolve when he became From Wyoming, where his wife Liz has lived since the Fall of Eden.