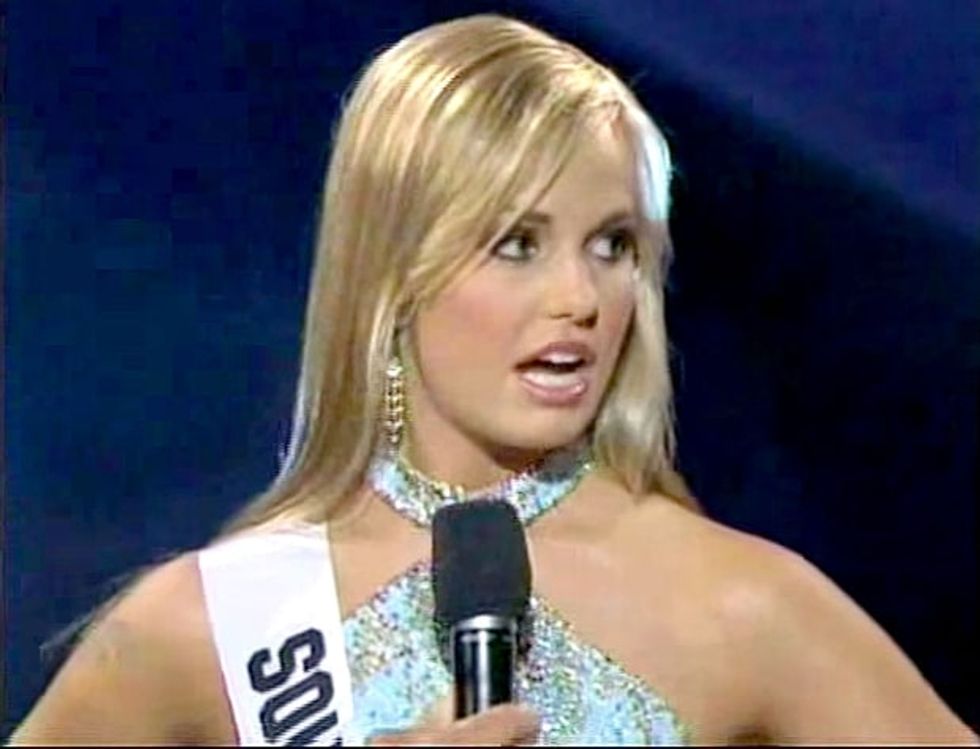 Don't worry, Trump, you probably still have her vote. Maybe.

Ah, South Carolina. Land of Lindsey Graham's white-gentlemen-only brunches (we assume), a Confederate flag that finally came down in 2015, Strom Thurmond's disintegrating carcass, and also the coast, which is lovely. A state run by a lady named Nikki Haley, which pleases the GOP because after all, they can't be racist if they like Nikki Haley, can they? She is a verified brown minority person! A state that hasn't voted for a Democrat for president since 1976, when it voted for that nice Baptist boy Jimmy Carter from the next state over. A state Mitt Romney and John McCain both beat Obama in by around 10 points.

And ... a state that Hillary Clinton might turn blue in November! Rachel Maddow reports on a new poll from The Feldman Group that shows Trump and Hillz tied in the state:

Rachel is all "Yes, I said South Carolina, not North Carolina!" The candidates are 39-39 in a four-way poll that includes Gary Johnson and that other dingbat, what's her name. When it's a two-way race, Trump beats Hillary by TWO LITTLE TINY POINTS.

The head of Trump's campaign in South Carolina huffs and puffs that this poll is dumb and bad because it was commissioned by South Carolina Democrats:

For Ed McMullen, the chairman of Trump’s campaign in South Carolina, the rollout was just another sign of wishful thinking on the part of his opponents.

"Let me spare everyone the suspense,” McMullen said in a statement to The Post and Courier. “I predict we’ll have six more of these ‘troll polls’ before Labor Day ... They know they don’t have a chance, and so does everyone else.”

[wonkbar]<a href="http://wonkette.com/605676/hillary-clinton-just-screwing-around-in-red-states-now-for-lols"></a>[/wonkbar]Hmmmmm, does "everyone else" really "know that"? Because we feel like we were just reporting that Donald Trump is actually having to hire field operatives in South Carolina and Georgia, due to how bad he is doing in those states? Meanwhile, Hillary is fucking around in red states (and campaigning hard in some of them!) because she has a real 50-state strategy and knows that, with a historically, record-breaking-ly bad candidate like Donald Trump, she has a real chance of tearing some of these states out of the little orange hell troll's tiny baby hands and making him eat them for breakfast.

Weren't we just telling you another surprising place Hillary might win on Tuesday? Yes! It was Missouri, where she is just about tied as well! Add that to Trump's weak showings in Utah,Texas,Arizona and Georgia -- all the other entries in our LOL HILLARY WINNING RED STATES series -- and that is SIX traditionally red states where Hillz might have a fighting chance. We don't wanna jump to conclusions, and we SHOULD NOT be complacent, but we think this might end up being a hilarious landslide election, just maybe.

So, if you're getting excited to see just how much Donald Trump's splodey head will splode when he realizes what a loser he is on November 8, don't worry, that is allowed, because WE ARE TOO.