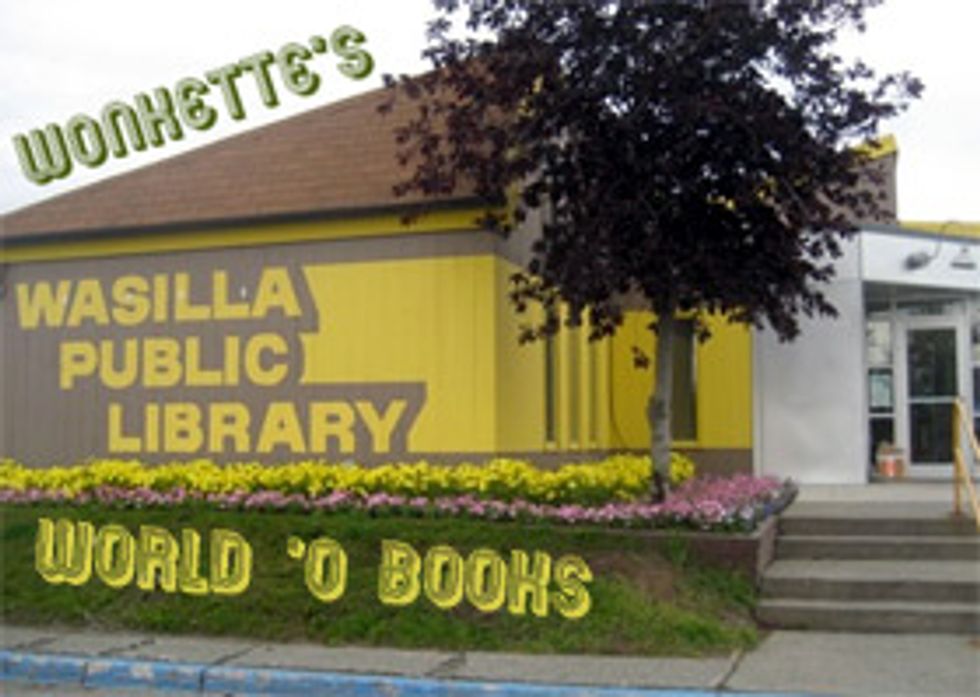 Former Texas Rangers owner George W. Bush was so upset by the outcome of the 2010 World Series that he retreated to a dark library somewhere and poured his feelings into a hugecri de coeur titled Decision Points. It also includes stuff about his time as President of the United States. You’ve already heard about the fetus jar and other revelations; is there anything else worth hearing about in this thing? Probably not! Nonetheless, Wonkette has read this miscarried jar-person of a book and reviewed it, here.

To be perfectly honest, nothing much occurs to your reviewer on the subject of George W. Bush’s presidential memoir. All of these Political Apologias are exactly alike, and even this one is hardly worth getting worked up into a frothing rage and screaming something along the lines of “How dare George Bush publish a book? Doesn’t he know he was the perfect mixture of crime and incompetence? OUTRAGE! I’M ANGRY ANGRY ANGRY, etc...”

Because really, who the fuck cares? It’s not like anyone reads RN: The Memoirs of Richard Nixon or The Reagan Diaries or An Extra Inch For My Bunghole: The Lyndon Johnson Story anymore.

The book is organized into chapters that each center on some specific Decision Point in G.W.’s life (whether or not to quit drinking, whether or not to invade Iraq, whether or not to ameliorate Africa’s AIDS problem with magic drugs made from discarded copies of U2’s How to Dismantle an Atomic Bomb). So the book is about the awesome and terrifying burden of human free will, or something. Like Dostoevsky.

There’s really nothing very interesting or telling in this book. There are a few charming anecdotes, though. Your reviewer found one in particular strangely compelling.

The scene: President Bush is arguing with Saudi Crown Prince Abdullah at Bush's ranch in Crawford, Texas. The year is 2002. The Second Intifada is underway (you remember that, right?), and the prince is upset about Ariel Sharon’s recent incursion into Ramallah. He asks Bush, “When will the pig leave Ramallah?”

Bush wants Sharon to leave Ramallah too, but obviously an American president, ANY American president, can’t do very much about an off-the-rails Israeli prime minister. The American prez and the Saudi autocrat argue and don’t seem to be getting anywhere. “America’s pivotal relationship with Saudi Arabia was about to be seriously ruptured.” What to do?!

Bush has an idea: he’ll win the Saudis over with an earnest conversation about religion. After all, “I had read two interesting things about [Crown Prince Abdullah] in a background briefing. One was that he was a devout religious believer. The other was that he loved his farm.”

The religion talk doesn’t go well, as Abdullah “wasn’t in a sharing mood,” so Bush takes him on a tour of his farm:

...the crown prince, flowing robes and all, was climbing into a Ford F-250 pickup....I point out the different kinds of hardwood trees, the native prairie grasses that Laura had planted, and the grazing cattle. The crown prince sat silently. I wasn’t making much headway.

Then we reached a remote part of the property. A lone hen turkey was standing in the road. I stopped the truck. The bird stayed put.

“What is that?” the crown prince asked.

I told him it was a turkey. “Benjamin Franklin loved the turkey so much he wanted it to be America’s national bird,” I said.

Suddenly I felt the crown prince’s hand grab my arm. “My brother,” he said, “it is a sign from Allah. This is a good omen.”

I’ve never fully understood the significance of the bird, but I felt the tension begin to melt...The next day, I got a call from Mother and Dad. The crown prince had stopped in Houston to visit them. Mother said he had tears in his eyes as he recounted his time in Crawford and talked about what we could achieve together. For the rest of my presidency, my relationship with the crown prince -- soon to be king -- was extremely close. I had never seen a hen turkey on that part of the property before, and I haven’t seen one since.

This turkey tale is worth any number of head-scratching political columns and tortured think pieces about the Bush family, America’s relationship with Saudi Arabia, and life itself. Seriously.

Oh hell, why not just make the rest of this review a random assembly of quotes from the book?

Bush on his reaction to hearing that America was under attack on September 11:

My first reaction was outrage. Someone had dared to attack America. They were going to pay. Then I looked at the faces of the children in front of me. I thought about the contrast between the brutality of the attackers and the innocence of those children. Millions like them would soon be counting on me to protect them. I was determined not to let them down.

Inspiring! Makes you want to protect the innocence of children and goats by hiding from terrorists all day.

He was warm to Laura and the girls. He frequently sent notes of thanks. He is a man of genuine faith. Bono could be edgy, but never in a cynical or political way.

Your reviewer isn’t sure what that last sentence means, but he thinks POP is actually pretty underrated.

Bush on coming from an illustrious family:

I am fortunate to come from a family of bestselling authors. My mother and father wrote fine books, as did my sister Doro. Closer to home, Laura wrote a bestseller, Jenna wrote a bestseller, and they collaborated on another. Even my parents’ dogs, C. Fred and Millie, authored their own works.

HAHAHAHA, the following is a 100% true story: when your reviewer was about 6 years old, he was literally given Millie’s Book -- authored by Millie Bush, George H.W. and Barbara’s springer spaniel -- as a gift. Really.

Bush on the moral justification for removing Saddam Hussein:

I’ve always wondered why many critics of the war did not acknowledge the moral argument made by people like Elie Wiesel...I didn’t see how anyone could deny that liberating Iraq advanced the cause of human rights.

The freedom agenda...was both idealistic and realistic. It was idealistic in that freedom is a universal gift from Almighty God. It was realistic because freedom was the most practical way to protect our country in the long run.

Well, that settles it then.

Say, what’s in the news these days? Oh look, the Iraqi Christian folk are being terrorized by bombings and massacres. This, too, is part of the Freedom Agenda.

Have you written a memoir of your shameful time in the White House? Email a review copy to greer.mansfield@gmail.com.