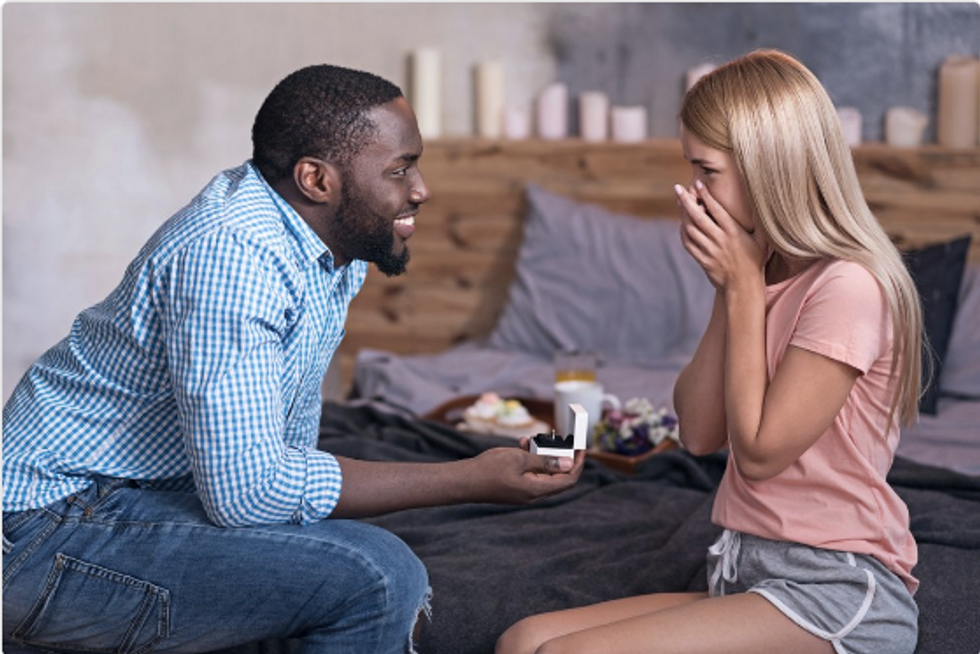 Hey Wonkers! How did you spend your Christmas Eve? I am an atheist, but even I spent it with my family, having the feast of two fishes (we're four people, what're we gonna do with seven? Plus baccala is gross) and some hors d'oeuvres. Maybe you did something similar! Maybe you even like baccala, and if so, I am sorry if I have caused any offense.

However, if you were a weird racist, with no one to love you, you just might have spent your Christmas Eve hollering at the State Farm Twitter feed for using a stock photo depicting a couple getting engaged.

Their problem, naturally, was that all the candles on the bed frame could be a fire hazard. HAHA, just kidding. They were mad because it is a black man proposing to a white woman. They were mad, they say, because they think this means that State Farm is not simply suggesting that people insure their engagement rings, but that State Farm is encouraging WHITE GENOCIDE.

Several decided to respond to the ad with some random statistics they pulled out of their asses.

Here is a statistic I just made up! No one who has ever sincerely used the term "white genocide" has ever given a woman an orgasm. Dick-insecurity is the number one cause of crying about "race-mixing" and "cucks" and "multi-culturalism."

It is no coincidence that many of those leading the charge against interracial relationships happen to be of the MRA pick-up artist persuasion. They believe, basically, that if they can dissuade white women from having sex with black men by portraying them as Lotharios who will inevitably leave them or hurt them in some way, that there will be more pussy for them. Unfortunately for them, pussy don't work that way.

Oh, for sure, "SaveTheWhites17"! You and your 43 followers that you had prior to getting booted from Twitter are totally going to shame women SO HARD, and they are all going to start swiping right on you on Tinder, and then next year, you won't have to spend Christmas Eve alone, yelling at an insurance company. That will surely happen.