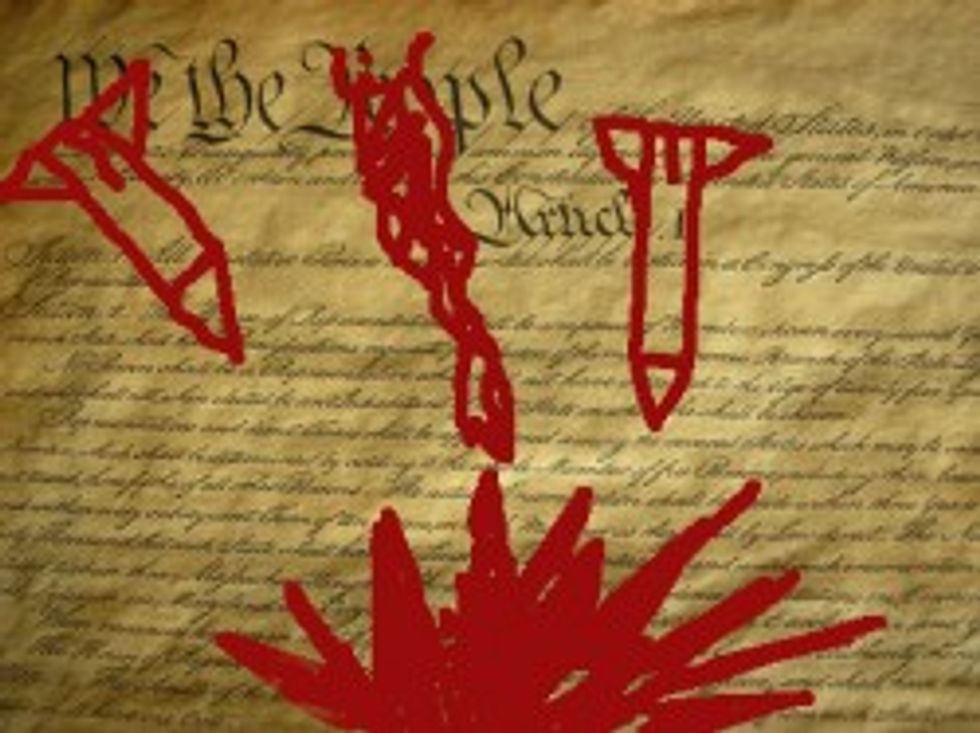 Hey, kids! Who's heard of the Constitution? Barack Obama has, hesaid so in 2007: "Unlike the current president I actually respect the Constitution." Haha, that was a weird sick joke, what Obama actually meant -- if you read carefully -- was that he is exactly like the 2007 president, and he too feels the Constitution applies, eh, on Mondays only, for show and tradition. Is it a Monday? NO? KILL KILL KILL! U.S. war machines rained fire and brimstone on American citizen and suspected terrorist Anwar al-Awlaki until he died, in Yemen (and now we get to put "suspected" in front of his name forever and ever because that's what the real jernalizm majors do, since he has never been convicted in a court of law). Only extrajudicial murder party wet blanket Ron Paul did not congratulate the President for taking a giant poop on the Constitution, right before he muttered something about how Americans are a senseless cabal of blind idiots. Okay, we'll give him that one.

"He was born here, Al-Awlaki was born here, he is an American citizen. He was never tried or charged for any crimes. No one knows if he killed anybody. We know he might have been associated with the underwear bomber. But if the American people accept this blindly and casually that we now have an accepted practice of the president assassinating people who he thinks are bad guys, I think it's sad.

"I think what would people ... have said about Timothy McVeigh? We didn't assassinate him, who certainly he had done it. Went and put through the courts then executed him. To start assassinating American citizens without charges, we should think very seriously about this."

And, for contrast, what does the paper of record, the venerable "of course we should invade Iraq" New York Times have to say about this blatant, clearly defined violation of the Constitution?

To blunt criticism from the left that the United States had targeted an American citizen for assassination, Mr. Obama took pains to describe Awlaki’s role as a key Al Qaeda operative behind deadly attacks on Americans, including the mass killings at Fort Hood, Tex.

Oh, right, it's a libtard issue. The Constitution is just some dogmatic anti-war-forever libtard Marxist leaflet George Soros wrote on a crumpled cocktail napkin to crush freedom. Luckily, cocktail napkin screeds are not binding precedent, and Obama can do whatever he wants, like murder. Silly libtards. [MSNBC/ NYTimes]