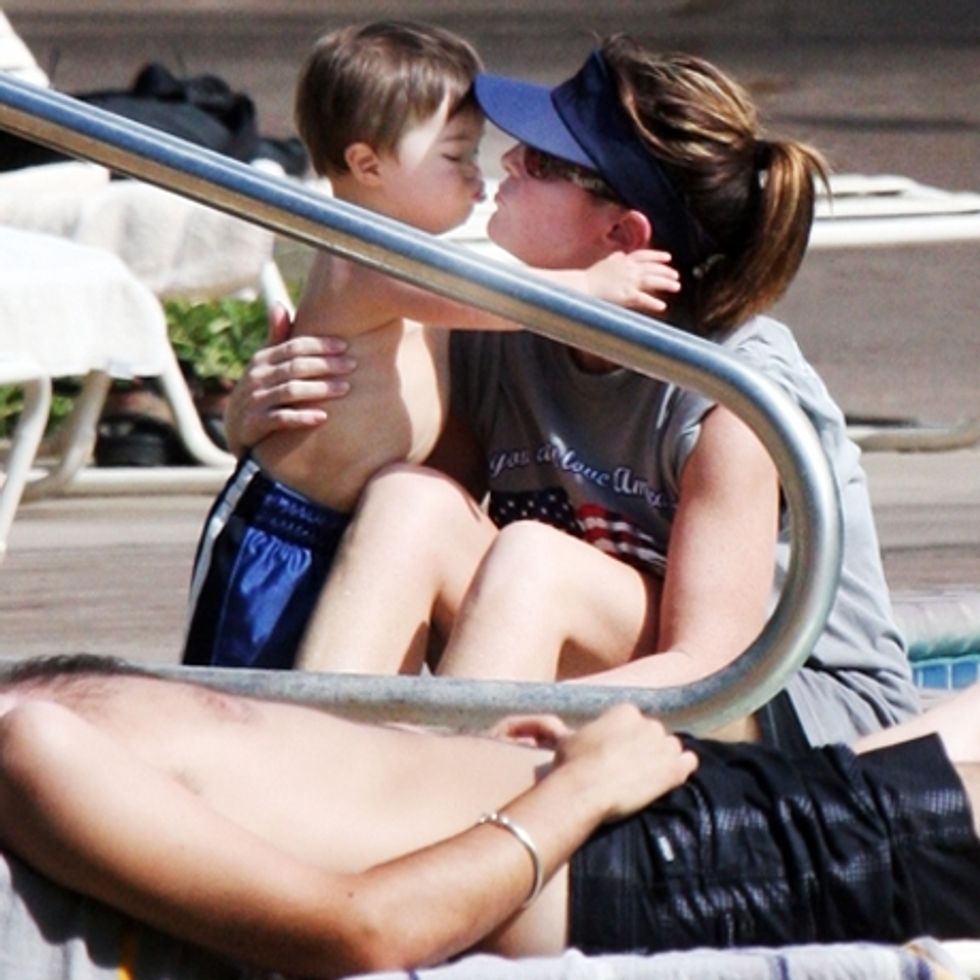 So yes, you knowVanity Fair has a long Sarah Palin profile in their October issue, and it has now gone up on the internets for the blogging and such, and it reveals things. Most importantly, of course, are the things about her underwear, so we had to get that to you right away. But there is a lot more in here: "anywhere you peel back the skin of Sarah Palin’s life, a sad and moldering strangeness lies beneath." Yes, we basically knew that. But the banality of Piper's evil dictatorship is not always banal, as there are plenty of fun nuggets of crazy in here. Oh, we will just tell you one: Sarah Palin probably doesn't write those crazy tweets. THE INTERNET'S INNOCENCE IS RUINED!

According to Ben Smith, this article is a portrait of "Sarah Palin as monster," which he is implying, we suppose, she is not. Hmm, weird position to take. "But my takeaway from the magazine piece is more that you can really write anything about Palin," he says.

So which tidbits should we pull out? Well, there's this one:

When John McCain decided to pull out of Michigan, a decision Palin disagreed with, Recher and Palin hatched a plan one day to make an early-morning drive to Michigan anyway. The Secret Service, becoming aware of the plan, asked the McCain campaign what it should do. The answer came: “Shoot out the tires.”

Also, she doesn't tip well! Also, one of her children was failing school when Sarah was announced as McCain's pick. (WHICH ONE? Trig? No, he is really competent at Down syndrome.) Also, hunting habits:

“This whole hunter thing, for Sarah? That is the biggest fallacy,” says one longtime friend of the family. “That woman has never hunted. The picture of her with the caribou she says she shot? She got out of the R.V. to pose for a picture. She never helps with the fishing either. It’s all a joke.” The friend goes on to recall that when Greta Van Susteren came to the house to interview Palin “[Sarah] cooked moose chili and whatnot. Todd was calling everyone he knew the day before—‘Do you got any moose?’ Desperate.”

And then there's an implication regarding Sarah Palin's tweets and Facebook messages, after she hired a Conservatives4Palin blogger as a consultant:

But her voice, or at least a voice that sounds much like hers, was about to turn up in another venue. When it was first set up, in January 2009, Palin’s Facebook page might as well have been a file cabinet for official press releases (“Palin Pushes Parental Consent Legislation”) written mostly in a stiff, third-person form. The same was true of her Twitter feed, which went live in April. After Mansour’s voice disappeared on C4P, however, Palin’s voice on Facebook and Twitter started sounding increasingly provocative and irascible... Palin’s virtual voice does sometimes have the ring of authenticity. But often it sounds less like Palin herself than someone else’s fantasy version of Palin at her most vitriolic. On one occasion Palin’s virtual voice contradicted remarks she made in a TV interview two days later.

But most importantly, there's a small chance we may not have to wait much longer for Palin to announce her presidential bid:

When Devon calls to tell her that Glenn Beck has booked the Dena’ina Center, the largest venue in Anchorage, for a speech on September 11, 2010, she sits bolt upright and yells. Immediately, they start trying to figure out what the news might mean. “Listen, listen, listen: Why in the world do you imagine Glenn Beck would come to Anchorage on 9/11? You think he might have a special guest? With a special announcement? Oh,” she says, her whole face falling as the implications of a Palin campaign kickoff hit her, “Jesus Christ.”

FIST PUMP! Make a batch of deviled Trig eggs, grab a beer, and sit down at your computer. HERE WE GO. [Politico/Vanity Fair]