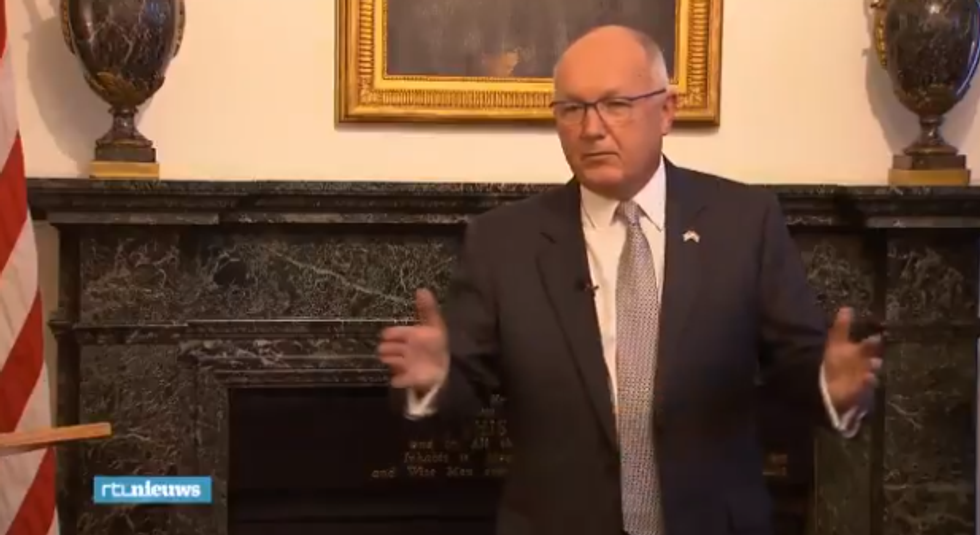 The "no-go" zone was THIS BIG!

Pete Hoekstra, he is this dumb fucking Trump idiot. He used to be a Republican congressman from Michigan, but now he is Donald Trump's ambassador to the Netherlands. Presumably he got the job because he was borned there, way back in 1953! But alas, he moved to America when he was three.

HOEKSTRA: I didn't say that. That is actually an incorrect statement. We would call it fake news. I never said that. No, it's not what I said!

OK, now that we've gotten that moment of RAGE out of the way, we shall proceed.

When that happened in December, the Dutch journalist proceeded to SHOW HOEKSTRA THE CLIP OF HOEKSTRA SAYING THE DUMB STUFF, then asked, "You call that fake news?" To which Hoekstra responded:

HOEKSTRA: I didn't call that fake news. I didn't use the words today.

HOEKSTRA: I don't think I did.

Fast forward to this week, when Dutch reporters decided to ask Hoekstra more questions about "no-go zones" and Dutch politicians who are aflame. And oh, did they ask him questions! They refused to stop asking him questions, and he just stood there like a guy who can't find his wooden shoes with both hands (common Dutch joke! unless it isn't), refusing to answer the questions. But sir, tell us about everybody being on fire! Tell us about the neighborhoods you are scared of! Show us on the doll where the fiery Dutch "no-go zones" touched you!

At one point, a journalist asked Hoekstra to read a John Adams quote about "honest and wise men" on the fireplace mantle behind him, and in light of that, whether he would take back his comments about "no-go" zones. Hoekstra's response was to read the quote and then say "thank you":

Today Dutch press welcomed @petehoekstra as new ambassador to the Netherlands. In 2015 Hoekstra said Dutch"politicians are being burned" (not true). The only one who did get burned today is... Hoekstra himself. By refusing to answer our questions. pic.twitter.com/Dv2aalbhDP

This is a remarkable exchange, as reported by the Washington Post:

“If you’re truly an honest and wise man, could you please take back the remark about burned politicians or name the politician that was burned in the Netherlands?” [journalist Roel] Geeraedts asked.

An uncomfortable silence followed the question.

“Thank you,” Hoekstra said, before trying to call on someone else over the clamor of the reporters in the room.

“Excuse me, I asked you a question,” Geeraedts said.

Another journalist jumped in.

“Mr. Ambassador, can you mention any example of a Dutch politician who was burned in recent years?”

Again, silence, as Hoekstra stared around the room.

“This is the Netherlands, you have to answer questions,” another reporter said.

Yeah, not like in that banana republic you have over there in America now that a small minority of Americans elected a lying tinpot dictator wannabe!

WaPo, citing a CNN report, gives more background on the loony-ass anti-Muslim conspiracies (in addition to the stuff about "no-go" zones and all the Dutch people currently being on fire) this dipshit has pushed over the years:

He speculated that some 10 to 15 percent of the Muslim community in the world — 270 million people — were radical Islamist militants and appeared to imply that Huma Abedin had “egregious” ties to the Muslim Brotherhood, a claim that The Washington Post’s fact-checker Glenn Kessler, and other publications, have determined as “bogus.” On another far-right show, Hoekstra said he had considered the possibly that President Barack Obama might be intentionally aiding the rise of Muslim extremists.

Donald Trump really does hire the best people. Or rather, he hires people just as stupid as he is, probably because it makes him uncomfortable when normal people are in his presence.

Thanks for voting, Trump supporters! Is this what #MAGA looks like?