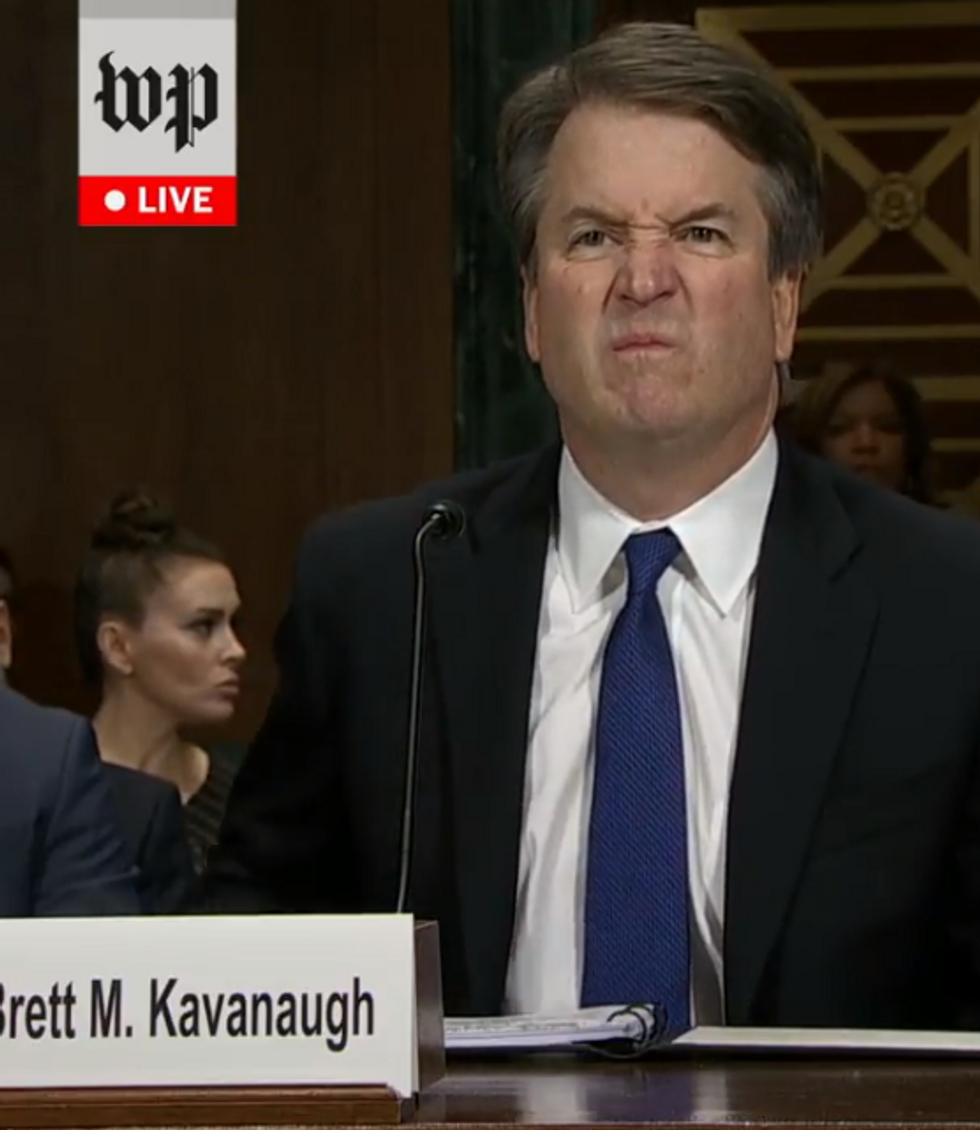 First of all, right here at the outset, and 27 days before the midterm elections, we should say that polls are starting to go a bit haywire, and we're hearing all different things about all different things. (Beto's up! Beto's down! Beto has an adorable ass, according to the poll we just took of ourself! See? There's variance.) But we are definitely starting to learn what America has been thinking in the wake of Brett Kavanaugh's confirmation to the Supreme Court, and also during the maniac few days just before that happened, when Susan Collins was going back and forth on how long she wanted to wait to fail America yet again.

A new CNN poll was taken from October 4 (Thursday) to October 7 (Sunday) and, well ... how do we say ... OK let's just say the GOP jizzed all over itself about three weeks too early, and if there's going to be a Brett Kavanaugh "bump," it's probably just the new Supreme Court justice "boofing" again. (Which means putting drugs into your butt! Drugs like cocaine! And people do a "bump" of cocaine! GET IT? WE MEAN BRETT KAVANAUGH IS DOING A "BUMP" IN HIS HIND QUARTERS! ALLEGEDLY!)

The point here, and Wonkette does have one, is that according to this new CNN poll, Democrats still have a 54-41 advantage among likely voters in the "generic" poll, where they ask if you'd like to vote for "generic" Democrat or "generic" Republican. CNN notes that this is the biggest advantage recorded in this poll since 2006, when Democrats had a "whopping" 21 point lead and beat the GOP's ass in those midterms.

But in case you are wondering precisely how pissed women are now, in a mathematical way, here is your answer, and it is that they are pissed in such a way that we personally think it might erase that "whopping" record from 2006.

Golly gee, CNN, women sure do "lean" more toward Democrats, don't they! (BY THIRTY FREAKING POINTS!)

Wonder what's gone on recently to make American women feel that way, as a whole! Oh yeah, we just said it, and it is that this poll was taken at the very apex of the Brett Kavanaugh situation.

Did the GOP have a hard time figuring out that pushing a likely sexual predator onto the Supreme Court might be problematic for them with women? Is it possibly because they don't think women are actual people, therefore how can they even SEE them in polling results? If so, that seems like quite a problem of their own creation!

Democrats are also beating Republicans on the enthusiasm chart, with 62 percent saying they are either "extremely" or "very" excited about the upcoming elections, whereas the GOP clocks in with a very tiny number that is less than that, which is just 53 percent.

We really truly feel very bad for the Republicans (factcheck no we do not) that they prematurely ejaculated their little Brett Kavanaugh situation a few weeks too early. Maybe if they had waited a little longer, they could have closed that enthusiasm gap. (Factcheck hahaha no, you have NO IDEA how pissed Democrats are right now.)

But as it is, we guess the Dems will just have to kick ass and take back Congress, and start building the majorities it's going to take to get that dumb motherfucker off the Supreme Court forever.

And also take back our country and save it from Donald Trump.

And maybe do free healthcare for everyone.

And everybody gets a candy cane and a pony, because we are Democrats and we like handouts, of candy canes and ponies especially.

Wonkette is the ONLY NEWS ON THE INTERNET. Please give us money RIGHT THERE BELOW if you want us to live FOREVER.