Looks Like Julian Assange Is A Common Liar (WHOA IF TRUE!) 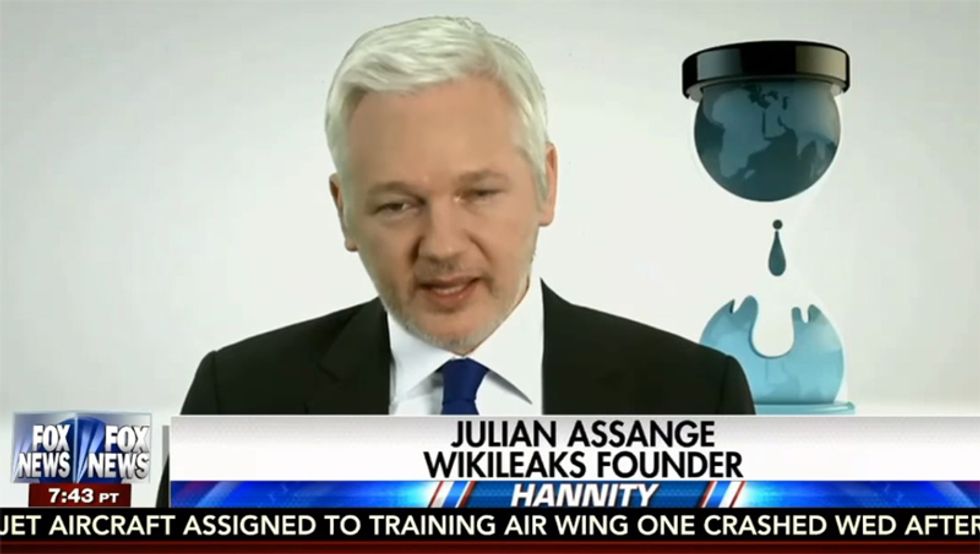 Tuesday afternoon, many people were thrilled to hear that President Barry Hussein O'Bamz had commuted Chelsea Manning's (very long) sentence for leaking government secrets, bringing it down from 35 years to time served, plus a few more months, to get ready for living in the free world again. She will be out in May! On top of being happy, many people also were LOLing at Obama being all funny, considering how Wikileaks alleged rapist goon Julian Assange made a promise just last week that he would roll his lily-white ass out of the Ecuadorian embassy in London, where he's been hiding, and face extradition to the United States if Obama granted Manning clemency. Here is that tweet:

The Justice Department case against Assange (IF IT EXISTS, which it probably most certainly does) comes from that time Chelsea Manning gave all those government secrets to Assange in 2010. And of course, Assange still faces rape charges in Sweden (and he apparently thinks it's LIBELS!!!!111! to mention that, as Wonkette's C.A. Pinkham found out). And then there are all the current inquiries into Wikileaks's role in Russian interference in the 2016 election. In short, LOTSA FUCKIN' PEOPLE want to talk to this guy, and maybe put him in jail for one million years for being the worst person on earth.

When news of Manning's commutation broke, Assange's lawyer Melinda Taylor seemed to suggest Assange wouldn't go back on his word, and the Wikileaks Twitter account (likely run by either Julian or his cat or his mom) got all huffy and puffy about how Assange would TOTALLY win any U.S. case against him. Hell, at 11:16 AM today, Eastern Time, Wikileaks tweeted that Assange is "happy to come to the US provided all his rights are guarenteed [sic] despite White House now saying Manning was not quid-quo-pro [sic]."

But, oh well, guess somebody had an uncomfortable bowel movement between two hours ago and now, because here's the latest:

The attorney for Julian Assange said President Obama's commutation of Chelsea Manning’s sentence does not meet the conditions of the WikiLeaks head's offer to be extradited to the United States if Manning were pardoned. [...]

“Mr. Assange welcomes the announcement that Ms. Manning's sentence will be reduced and she will be released in May, but this is well short of what he sought,” said Barry Pollack, Assange’s U.S.-based attorney, via email.

“Mr. Assange had called for Chelsea Manning to receive clemency and be released immediately.”

Oh goodness, Peaches found a loophole! Or lied. Let's go with "lied." (ALLEGEDLY.) Because that is decidedly not what that tweet, pasted above for easy reference, said. And hey, maybe Obama wasn't doing a quid pro quo, and instead was simply showing mercy to a person who was being mistreated in our prison system, a person whose life is pretty much ruined now anyway, regardless of what you think of her crimes. But Assange (or his cat or his mom, or Mabel, the sweet old retiree he hired to Do Twitter) just said, "If Obama grants Manning clemency." And Obama did.

But oh well, it's not like we expect Assange or Wikileaks, that great vanguard of transparency, to be above totally fucking lying when it suits their purposes, like say about whether Russia handed them all those Clinton/Podesta emails, or if it serves to keep Julian Assange safe in a warm bed in the Ecuadorian embassy, where he can play with his balls in peace.